This week, the market selling momentum was back despite many concerns, including rising rates and valuations. The Nasdaq Composite dropped 3.2%, while the S&P 500 lost 2.2%, the Dow Jones Industrial Average declined 1.4%, and Russell 5000 only fell 0.3%.

The U.S. Treasury market was a source of concern as the Ten-year yield hit 1.56% in the early part of the week amid Fed tapering tantrums and continued inflation pressures. This rate of change was not good for the high valuations of growth stocks, considering that the Ten-year yield hovered around 1.30% last Wednesday.

The situation was worsened by continued uncertainty about the debt ceiling and infrastructure and by ongoing supply chain disruptions highlighted by many companies this week. Deteriorating technical factors were also a factor as the S&P 500 index cut through its buy zone and completed Outer Index Dip - See Weekly Market Review & Analysis For September 20. 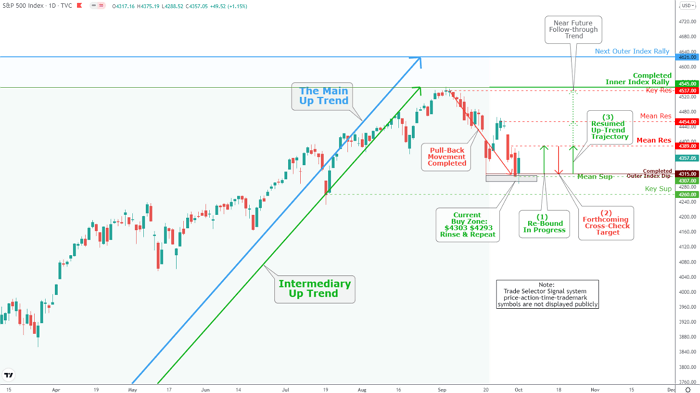 Although the market ended the week positively since new money was available on the first of October, the damage had already been done. The S&P 500's information technology with -3.3% and health care with -3.5% were sectors that fell more than 3.0%. The energy sector with +1.8% was higher due to energy prices and was the only sector that closed in positive territory. In September equity market was not spared a terrible September, with a 4.5% drop in stocks.

As reports covered fuel shortages in the U.K. and an energy crunch in China, positive momentum in energy prices contributed to the inflation narrative. West Texas Intermediate (WTI) crude oil futures increased 2.5% to close at $75.87/bbl. On a relevant note, Dollar Tree (DLTR) announced that certain items would be available for sale at $1.25 to 1.50.

The U.S. Treasury market finally calmed down, with the Ten-year yield closing at 1.47%. This is one basis point higher than the previous Friday's settlement. There were married economic data present in the mix.

In other related market news: Fed Chair Powell reiterated before the Senate Banking Committee his belief that inflation pressure must remain high before the Fed can moderate closer to its 2% longer-run target. The retirements of the Boston Fed President Rosengren and Dallas Fed President Kaplan were announced due to scrutiny over the investment trades scandal.

The global equity market(s) had a mixed week amid concerns about Chinese credit markets and ongoing political wrangling regarding the U.S. debt ceiling. Fixed income saw a variety of central bank signals and moves that made headlines. This changed the story and moved the global monetary policy needle to the hawkish end.

Global bond yields rose to levels not seen since the summer as more central banks lean towards tightening policy. Norway raised its rate 25 basis points to 0.25%, and Brazil increased its key interest rate for the fifth time this year. They also implemented another 1% increase to 6.75%. The Bank of England did not make any changes, but the vote was not unanimous. The Committee is becoming more hawkish.

China's primary concern is Evergrande, a giant real estate and property developer. This could spread risk aversion to the global capital market(s), cause public protests in China, and possibly inflict undue damages on the already slowing Chinese economy. China's Central Bank is closely monitoring any "worst-case scenarios" and will likely use all its tools to prevent them from happening.

The fears of a massive credit crunch in China may be exaggerated. The property sector's links to the financial system are less important than a Lehman Brothers moment; however, they are closely monitored and studied. The central government controls and directs the country's top banks. Suppose it were ever confronted with a financial-crisis-like situation. In that case, the Chinese financial regulators could swiftly require their banks to extend credit to financial institutions and firms in an ultimate scenario, keeping them adrift.

As Evergrande's interest payments fell into the grace period of 30 days, the central bank increased liquidity to the system. This avoided a technical default. Other interest payments were said to have been renegotiated by bondholders. The central authorities requested local governments to prepare for China Evergrande's possible downfall, signaling a reluctance of the government to bail out the entire company.

If Evergrande fails to manage its affairs orderly, local government agencies and state-owned businesses have been instructed to handle the aftermath. The situation is causing concern on the global capital market(s), but they are not yet in a state of panic.

Both the uncertainty surrounding the Evergrande situation and the U.S. debt ceiling stems from politicians and politics being at the heart of both accounts' solutions. The resolution is inherently or by definition subject to rhetoric, deception, and a level that invites the possibility of a mistake (or just the fear of one) that shakes global capital market(s).

Gold was trading quietly on Friday in the follow-up to Thursday's substantial advance. It was up $4, closing at $1761. Silver was up 34¢, selling at $22.50. In September, the backdrop of uncertainty at the Fed, a negative reversal on the bond market, and a stronger U.S. Dollar, despite growing doubts about inflation, was not kind to either precious metal. The month ended with Gold finishing down 3.1%, while Silver fell 7.7%.

Bitcoin rose to $48,500 on Friday, with the top 20 cryptocurrency markets almost all in green. El Salvador claimed it had mined its first Bitcoin using volcanic energy. Jerome Powell, the chair of the U.S. Federal Reserve, stated on Thursday that he does not intend to ban cryptocurrencies.

The sale's over. The fourth quarter of almost all previous years were positive for the Bitcoin price. In 2020, Bitcoin increased by an impressive 169%. History, of course, never repeats, but if it rhymes just a little, we're going for a helluva ride. 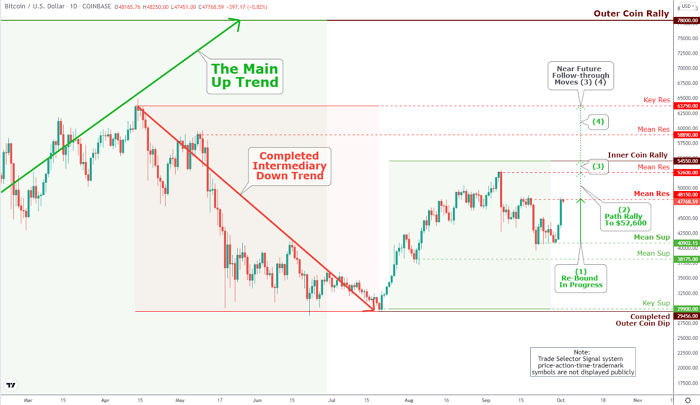