It’s finally the weekend! Time for a market recap of the week. And what a week it was. All cryptocurrencies showed a lot of green, but the winner of this week is Bitcoin.

Bitcoin started the week with a price low of $11,416, but that quickly increased to $11.000. There are some technical reasons, but I don’t want to bore you with the details. The most important news of the week and the primary source behind Bitcoin's epic rise come from PayPal.

Starting in 2021, 350 million users and 26 million shops can use Bitcoin through their platform. That is what we call bullish.

There’s also another exciting development in the crypto market. A lot of publicly traded companies are buying Bitcoin. It seems they want to one-up each other, just for the bragging rights. Okay, that’s not entirely true; they can’t seem to ignore Bitcoin as a safe haven asset and hedge against monetary policies. Let's look at the top three scenarios.

1. MicroStrategy used $425 million to buy Bitcoin. That was a couple of weeks ago. The current market value? Almost $497 million.

And another nice bonus, the market value of their publicly traded stocks all rose significantly higher.

The Galaxy Digital CEO Mike Novogratz said on Friday that PayPal entrance into BTC's world is the biggest news of this year in crypto: ‘All banks will now be on a race to service crypto. Exciting day.’

If the trend of publicly traded companies buying and developing Bitcoin continues and banks finally play the game, it’s just a matter of time before the coin reaches a new all-time high. 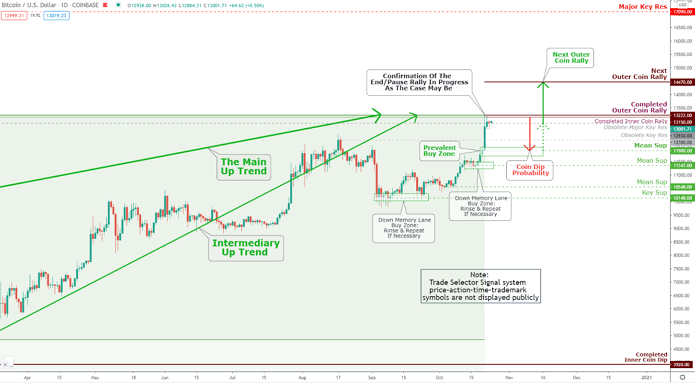 The technology market underperformed, and the Ten-year yield advanced

The S&P 500 market faded 0.5% this week, chiefly due to a 2.2% drop in its top-weighted sector - information technology. The Nasdaq Composite index declined 1.1%, and the DJI Average declined 1.0%. The small-cap Russell 2000 index ended in positive territory with a 0.4% accumulation.

There were many news headlines on stimulus this week that said next to nothing by the do-nothing congress; never the less the key takeaway was that notwithstanding more progress gaining, the bill passage of a stimulus might have to remain in limbo until after the presidential election. Of course, anything can arise between now and November 3; however, U.S. Treasury Secretary Mnuchin announced that significant differences remained unanswered on Friday.

Beneath the news headlines and lackluster leading indices performances was a much of "churn." The Ten-year yield increased ten basis points to finish at 0.84% this week on inflation expectancy; this supported the rate-sensitive financials sector with a +1.0% gain posting at the account of numerous high-valued growth and technology equities that had profited from persistently low yields.

Intel and Netflix were some well-known earnings-related slouches. The former weighed much on the PHLX Semiconductor Index with -1.7%.

The largest major stock markets in Eurozone were more under as daily new coronavirus infections scored record highs in many EU countries. As economic constraints continued to be compressed, much of the consumer confidence models slipped. Considerably France's business confidence index declined for the first time around since April.

In Japan, the stock market succeeded a small gain after the country's machine tool orders declined less than anticipated. Equities in Hong Kong were higher following the retail sales, and industrial production in China was reported well over expected value.