The S&P 500 market started the week increasing its consolidation pattern despite a rotation into cyclical equities, then finished the weekly session on a positive plane as the profits widened out to the beaten technology sector. The index climbed 1.2% to all-time highs, establishing another record-setting achievement in the DJI Average with a +2.7% gain. 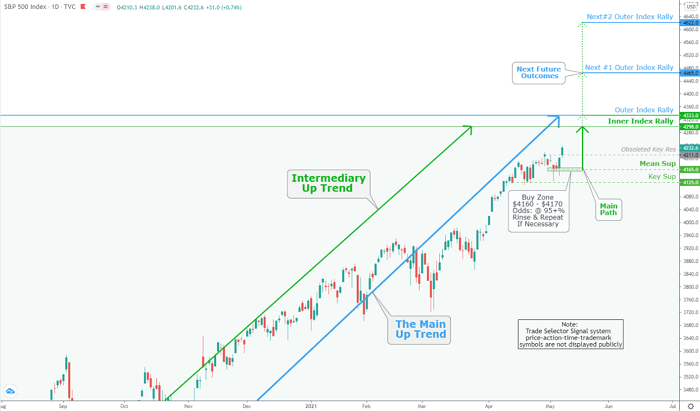 The Nasdaq Composite declined 1.5% after being down under the water as much as 3.8% this week. The small-cap Russell 2000 stayed within its three-month consolidated trend by rising small 0.2%.

Four sectors scored solid gains; industrials were posting +3.6%, financials with +4.2%, materials with +5.9%, and the cyclical energy print +8.9%. Conversely, the consumer discretionary posting -1.2% and the information technology sector with -0.5% were the sectors that dragged on index performance despite relevant weakness in their growth-stock segments.

This week's market session was one of the most active weeks in earnings news witnessed in a long time, however like the weeks before, the performance was not a catalyzing part this week amid resting on the side of better than anticipated. More striking were the key economic releases that showed a slowdown in the fast-paced US economic recovery and conceivably explained the overall lackluster acknowledgment to earnings.

The enormous payroll miss was the main center of attention for legislators and stock market participants on Friday. The lawmakers assumed that the lengthened unemployment benefits granted a temporary disincentive for the working class seeking employment; however, this claim was dismissed by the Biden administration. The Fed perhaps saw the job numbers as a reason to refrain from considering tapering asset purchases.

On the inflation scene, the prices component within the purchasing managers' index (PMI), also known as ISM Manufacturing Index, reached its costliest level since 2008, standing at 89.6%, confirming a remark from Warren Buffett that his business interests are seeing "substantial inflation" and that they are boosting prices in answer to the higher costs they are incurring.

The peak growth anecdote that stalled down the market last week was slightly weakened this week based on the split between the cyclically-oriented Dow Jones and growth-oriented Nasdaq. The latter would have bettered if traders and investors were concerned about economic growth measures. The Cathie Wood’s ARK Innovation ETF, a surrogate for high-growth story stocks, plunged 9% this week's session.

The US Treasury market, however, continues to be a pointer for staggering peak growth concerns. The Ten-year yield declined this week's session five basis points to close at 1.58% displayed increased demand.

In international trading, stock markets over the Asian-Pacific region set in another mixed performance action throughout trading on Friday's session. Japan's Nikkei 225 Index crawled up by 0.1%, while mainland China's Shanghai Composite Index skidded by 0.7%.

The significant Eurozone stock markets all advanced to the upside on Friday. While the leading German DAX 30 Index rose by 1.3%, the United Kingdom.'s FTSE 100 Index was promoted by 0.8%, and the French, the main CAC 40 Index, increased by 0.5%.

While the Bitcoin market is languishing, some altcoins are going to the moon. Litecoin and Bitcoin Cash, in particular, have been showing some jaw-dropping gains in the past few days. Litecoin, for the first time since 2017, set a milestone; the cryptocurrency reached a value of more than $370. That's the highest price ever!

Bitcoin Cash also keeps going. The split-off of Bitcoin shoots through the critical $1,100 resistance and reached a high of $1,604 on Thursday. That's the highest price since May 2018. To reach record highs, the price still needs to double from here. So there's still plenty of room to grow!