It was a great market this week for the energy and financial stocks, as inflation and growth expectations rose, but it was not so healthy for the growth stocks that were earlier supported by very low-interest rates. The Nasdaq Composite Index declined 1.6%, the small-cap Russell 2000 declined 1.0%, and the S&P 500 index declined 0.7%. The DJI Average with a +0.1% gain ended the week insignificantly higher.

Interest rates were set low from a historical point of view; nevertheless, the sharp rise in long-term rates inflated valuation challenges this week. The Ten-year yield increased 15 basis points to close at 1.35% amid renewed selling interest held by a pro-cyclical endless news cycle. The Two-year yield rose one basis point to close at 0.11%.

The top-weighing information technology sector fell 1.9%, which pulled down massively on S&P 500 index performance, understanding that the sector holds roughly 28% of the index's market capitalization. The vital health care sector went down -2.5%, the utilities sector posted -2.0%, and the consumer staples sector lost -1.1%; these were the sectors that posted noteworthy declines.

On the other hand, the curve-steepening market activity in the U.S. Treasury was a blessing for the big bank stocks amongst the financials sector posting an excellent +2.8% gain. In comparison, the active energy sector with +3.1% staged to rally from a low-level base. Crude oil prices were very volatile after a frigid winter storm drove many oil refineries in Texas to shut down their operation briefly.

From a price-action perspective, the broad-based S&P 500 index did not create that much movement at all in this week's action, even though it concluded lower in all trading sessions. This, however, implies that the market began a consolidation phase as it swallowed the higher interest rates and cyclical rotation without damaging the overall risk sentiment factor.

Asia-Pacific and European market(s) were a mixed bag. Germany and Italy ran lower, while the United Kingdom and France made moderate gains. Japan’s prominent Nikkei 225 Index rallied to its highest price level ever since the middle of the 1990's decade after the country listed a much more robust than the expected fourth-quarter GDP (Gross Domestic Product) and the manufacturing PMI (Purchasing Managers Index) soared in February at its most active pace since 2018.

As the chart below shows, Gold and Silver seem to be moving in their separate directions on the precious metals front, with Gold cruising lower while the Silver steadily ticks higher yet. Given this, Silver strength has never been seen so obvious. They are entirely disregarding the most recent weakness in the yellow metal. A mini-crisis for precious metals seems to be approaching the end - this not the time to be shaken out of the investment holding. 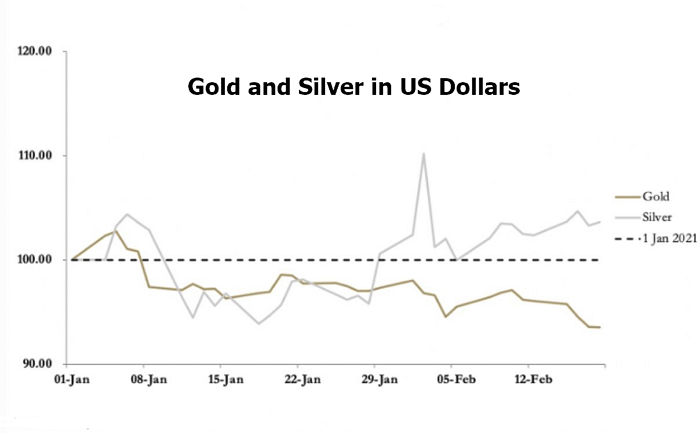 The cryptocurrency's bull movement is in all its glory! Most of the top 100 cryptocurrencies are showing impressive gains. For some coins, this bull market is a marathon. It has been a genuinely breathtaking week for Bitcoin. Last Wednesday, Bitcoin managed to break through the magical barrier of $50,000 (the equivalent of 41,181 euros). If that wasn’t enough, the price only continued to rise. Last Friday, Bitcoin reached its highest point to date, over $56,000!

For many investors, the total market value of Bitcoin is an exciting thing to keep an eye on. This market value is calculated by multiplying the number of coins by the current price. Bitcoin reaching a price of over $54,000, which means its total market value is over $1 Trillion. Another exciting milestone for Bitcoin! By comparison, the entire Silver market is estimated at USD 1.5 Trillion. Bitcoin is well on its way to reaching that number this year. Pretty impressive for magic internet money!