All eleven S&P 500 sectors market posted weekly healthy gains, ten of which propelled higher from 2.3% posted by utilities and 8.3% print of the energy. The fragile health care sector added a small +0.5%.

Economic stats, good either/or not-so-good, was interpreted as positive for the equities because a) if it was great, it showed the economy was recovering, which would hint at more significant earnings potential and b) if it was not so good, it backed the thesis for additional fiscal stimmy. Well, now such is life in the money changes sponsored bull market.

Last month Manufacturing ISM report and Non-Manufacturing Purchasing Managers' Index (PMI) reached expansionary territory over 50.0% for the eighth consecutive month. On the other hand, the employment market persisted sluggishly, and the CBO (Congressional Budget Office) said it does not foresee employment to regain the pre-pandemic levels until sometime in 2024.

Total nonfarm payrolls expanded only by 49,000 following a 227,000 drop in December of last year, while the unemployment numbers dropped to 6.3% in the Lollaland economy from posting 6.7% in December.

The market on U.S. Treasury Ten-year yield rose eight basis points to close at 1.17% amid firm selling pressure, as many investors proceeded to bet on recovered economic growth. However, the Two-year yield declined three basis points to close at 0.09%. The Chicago Board Options Exchange (CBOE) Volatility Index fell 36.7% to post a 20.95, as traders and investors called away hedging exposure.

On the old continent, Italian stock markets led the advancement after former ECB (European Central Bank) President super Mario Draghi accepted an invitation to establish a national unity government (Same rats on the different ship). The movement presumably allows Italy to evade the possibility of a snap election amid the Covid pandemic. It will expedite agreement on how to spend the country’s share of the EU's Recovery Fund in a way that supports growth as well as fiscal sustainability - Oh my, what a talented guy.

There were few troubled days when an exogenous buying increase caused a spike in both the Gold and Silver market, followed by the imminent correction. However, as it turned out, the game lasted only a couple of trading sessions and showed little damage to both metals' long-term outlook.

If anything, it has been a clear positive outcome as it has revealed countless new investors were rushing to the powerful bullish movement for Gold and especially Silver.

But as you can see in the Silver chart below, we see a rally after this week’s takedown. The continuous Silver action keeps the price above Mean Sup $26.250. Silver's upside at this bull market rally is high - retest of the Key Res 29.00 is imminent. However, the downside low probability pullback should be to the Key Sup $24.750 - If it happens at all. 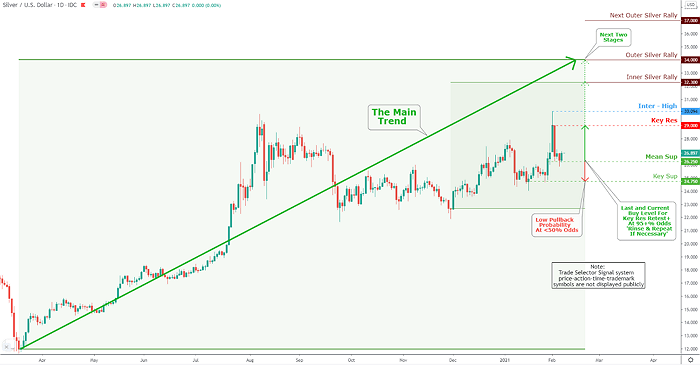 What a week for the crypto markets. Bitcoin was trading within a range of $33,000 and $39.000, which can be seen as sideways. This gave the rest of the market breathing room and space to expand. Bitcoins' dominance on the crypto market dropped from a staggering 72% to the current 61%.

And who was there to pick up the pace this week? Ethereum and XRP. Ethereum noted new all-time highs for several days in a row. The value increased this week by over $400.

XRP got infected with the GameStop virus. Groups were coordinating to pump the price of Ripple’s coin to new highs. This culminated in a peak near $0.76 - However, after the pump, there was a big dump - Ouch!