The past market week witnessed more new records prices in the equity markets, with the S&P 500 and Dow creeping to fresh highs. The two significant indices earned 0.7% and 0.9% for the week's session, while the Nasdaq did less than expected, dropping 0.1%. Small-cap stocks also struggled to keep step, as the Russell 2000 index lost 1.1%.

The focus was on the news from Washington throughout the first half of the session, as the U.S. Senate passed a $1.2 trillion infrastructure measure and authorized an additional $3.5 trillion spending. The U.S. House will now examine the measures; however, reports from Friday showed increased skepticism, with nine House Democrats proclaiming that they will not vote for the $3.5 trillion bundle budget resolution till the bipartisan infrastructure of $1.2 trillion measure is signed into law.

The revamped doubts didn't stop the leading indices from closing the week on positive development. Ten S&P 500 market sectors posted gains for the week, with the financials sector posting +1.9%, consumer staples sector print +2.1%, and materials sector with an increase of +2.7% leading the way; however, the energy sector with -0.8% finished in the negative territory.

The consumer staples sector market received substantial support from Tyson Foods. The stock surged almost 14.0% for the week's trading session after reporting better-than-expected returns on the morning of the first day of the week. Sysco increased approximately 7.5% after the announcement; it also beat second-quarter expectations on the Tuesday morning session.

In another earnings announcement on Thursday evening, The Walt Disney Company attained a three-month high after surpassing revenue and earnings expectations posting after the regular trading session.

On the negative side, major chipmakers did less than expected through Thursday with the SOX (PHLX Semiconductor Index) by narrowing its loss for the week's session by a bounce-back of 2.3% in the course of a Friday trading. The state of underperforming followed a story from DRAMeXchange about the market outlook for memory chip prices to fall in Q4 up to 5.0%.

The majority of last week's economic news was very close to estimations. At the same time, the preliminary examination of the University of Michigan Sentiment Survey for the current month presented a considerable downside surprise. The index declined from 81.2 to 70.2, touching its lowest level ever since late 2011 due to worsening sentiment concerning all aspects of the U.S. economy.

U.S. Treasuries encountered, to some extent selling demand throughout the first half of the week's session only to recover the majority of their losses on Friday by a rebound that left the Ten-year yield 1.30% up merely one bps (basis point) for the week.

The vital Chinese Caixin Services Index bounced back from its over year low by an increase of 4.6 points to close at 54.9. The attributed successful hand-off that came from services to manufacturing forecasts as the economic growth moving forward.

The BoE (Bank of England) kept their benchmark rate constant however presented new forward guidance warning that the rates tapering may be imminent. If the United Kingdom economy continues in line with its forecasts, the central bank stated that "some modest tightening of monetary policy over the forecast period is likely to be necessary.”

The West Texas Intermediate (WTI) crude oil prices tumbled by the most in the past nine months showing softening demand outlook with closing of 68.09, an increase of 11 cents on the week.

The Gold market has recovered from the previous Friday's close, gaining $17, and redeemed over half the ground lost in Monday’s planted flash crash. The Silver lost 60 cents for the same period. What we witnessed this week was an organized bear attack on Gold. The precise time chosen while the European market was asleep, Americans returned from the weekend break, and Japan and Singapore were on holiday. Be aware it is August, the sluggish month for trading.

The Gold market had been lowered the previous Friday session with a $42 break of the critical $1,800 level. This was tailgated by the bear raid, setting off a massive number of stops on the Comex exchange driving the Gold down to as low as $1,682 at one point, for a total of a two-day collapse of $123.

We all remember what they did to Silver on the 29 April 2011 session. The same overnight Sunday session there was hit during a Japanese holiday, sending Silver downwards from $49 per ounce to a low of $33 by the 6th of May.

This takedown was choreographed and executed, possibly by the BIS (Bank of International Settlements) and many bullion banks. We do not know this for sure; as a reminder, the above con artists have been managing the Gold price for a long, long time, and it is their (BIS) Basel III latest regulations that are forcing all banks to close their derivative positions on their books.

It seems there is no stopping Bitcoin after the cryptocurrency surged past our psychological Mean Res $46,580 mark, which held the coin captive for four sessions from passing this barrier. Next is our target Inner Coin Rally of $50,130, coinciding with a significant $50,000 Maginot Line. Will the price of Bitcoin increase to $50,000 this weekend? Stay tuned. 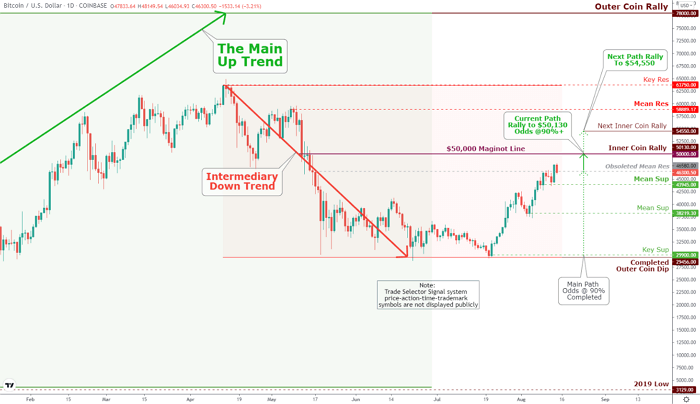