The gold price moment and the darker side of price manipulation 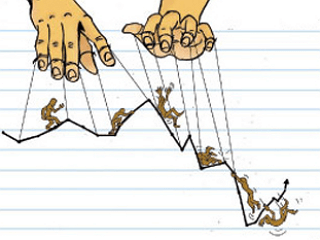 The gold's fundamental level of prearranged complexity is engaged in with forwarding contracts vs. futures contracts. It is not as dull or “smart” as others want you to believe it is.

The futures contracts are traded on registered exchanges where institutional traders, investors, and anyone else have unrestricted access.

Reasoning from this fact, the forward contracts are traded in that shadowy limited OTC market, where regular traders and investors have significantly reduced (if no) allowed access.

Instead, the only elite players allowed on that playground for forwarding contracts that are perceived as “principals” of “unregulated institutions,” which essentially means the fat cats: i.e., principal family offices, commercial banks, sovereign wealth funds, privately-held mega-companies, and other financial heavyweights like central banks.

These lucky, heavyweights “tricksters” are entitled to trade forward contracts and perform most of their high wire acts and with other privileged members of the LBMA (London Bullion Market Association). The latter negotiate and settle their trading in one of two locations London or Zurich.

According to the wolfs in sheep clothing at the Bank for International Settlements (BIS), there was about $530 Billion worth of Gold forwarding contracts in this exclusive playhouse members-only in 2020.

With recognition to Basel III, those banks and elite players are obliged to handle their contracts as “unallocated gold,” a.k.a. ''paper'' is known as “bad stuff'' which is carried as liabilities on their accounting balance sheets.

That suggests that those $530 Billion worth of forward contracts  (derivatives) demand to either: a) be very gradually eliminated from their books or b) converted and allocated namely into physical “good stuff.”

To summarize, the banks and other big shots need more physical Gold to adhere to Basil III, and by year-end, Gold pricing and demand among these tricksters should be soaring, no?.

But here is the unpleasant dilemma: there is a very real likelihood that those London Bullion Market Association members do not have enough physical gold assets: about 8,667 tons to match their accounting balance sheet paper liabilities: $530 Billion.

The banks necessitate lots more Gold tomorrow rather than today, as they report. The wolfs over at the London Bullion Market Association, though, would inform us not to worry, as they claim to have way over 9,500 stored in vaults the “good stuff” physical metal.

Sadly, however, what bullion bankers and other faxes are saying is not entirely a reflection of, well, actual truth. This brings us all back to the fundamental question as to why some parties would abruptly sell the $4 Billion (notional) value of Gold into a bid-pulverizing avalanche to distress (i.e., embarrass) the yellow metal; by $100 in just two trading sessions?.

Again, the uncomplicated, bitter yet unspoken fact is that most commercial and central banks do not have as much of this precious metal deposited in their vaults as they declare to have.

Well, they have been “fudging, fibbing and faking it” for many, many years, which, by the way, is nothing unusual, and that fits precisely to their inherent job description.

The disturbing reality is that the many central banks, which have ownership of 35,544 tons of physical gold declared between them, do not have what they profess they have.

In a nutshell, after 50 years of precious metal market deception, the music will stop, and we are all aware now that they want to purchase more yellow metal and very quick to save their face. A few sketchy banks just manipulated the Gold price downwards to buy it on fire sale rather than on paying the rising price trend.