The U.S. stock market was trading lower at the beginning of Q3, along with the world markets continuing to deal with the uncertainty surrounding the recession that has gotten worse as monetary policy tightens and economic data suggest a slowing in activity. The economic calendar revealed that U.S. manufacturing activity declined in June, and construction spending unexpectedly fell in May.

U.S. Treasuries market is increasing in value to put further downward pressure on yields, and the U.S. dollar has returned to bullish mode. Crude oil prices are gaining significant ground, while gold is feeling the pressure.

Micron Technology beat earnings estimations in stock market news, but its guidance was well under expectations. Kohl's Corporation is falling after the company canceled takeover talks in conjunction with Franchise Group, and GM has issued mixed forecasts. Asia ended the second quarter broadly lower, as did Europe, trading with mixed results. Indices Year-to-Day summaries are as below:

The market price of silver and gold fell significantly during the week leading to the half-year quarter, as recession fears continue to grow. Gold traded at $1810, down by $16 from the close on Friday, while silver traded at $19.87, down by $1.24. Gold is slightly lower than last year's closing, and silver is down 15%.

The Eurodollar has experienced another rough trading week, as the market pushed the 1.04 mark on Friday - Our Key Sup 1.038 was the primary show stopper. The market appears to be likely to fall at some point to Inner Currency Dip 1.031, but the exact time is not yet known.

The cryptocurrency market bubble, for instance, has lost over $2 trillion in bubbly value, as they are hoping to see the end of deflation. Currently, Bitcoin is trading at under $20,000 as they're waiting for oxygen therapy. Nevertheless, are cryptos part of an industry worth preserving? Or are they just trendy speculation? We will wait and see.

The prominent historian Howard Zinn wrote, "You can't be neutral on a moving train." This is a fact that is the case as one studies, watches, or listens to market news about finance. If we end up experiencing an economic recession, it will be among the most predicted ones we have ever witnessed, and there's no shortage of people who appear to know what's coming next and are eager to speak their minds.

There have been whispers lately that the Fed has exacerbated its poor inflation forecast with another missed on the rapid slowdown that is advancing. To clarify, the chart below shows the first-half year performance for silver, gold, bonds, and stocks. The yellow metal price held its own throughout the first half; however, the effect of the recession on white metal prices is evident. The bond market experienced its worst first-half performance since the early 1970s, while the equities saw their biggest first-half slump since the 1960s,

Overall this hasn't been a very good year for some speculating and majority investment market, but all of us are grateful for gold's perseverance. If stagflation is the direction we're going, it may be helpful to look back at how silver and gold performed when they last came calling the market in the 1970s. 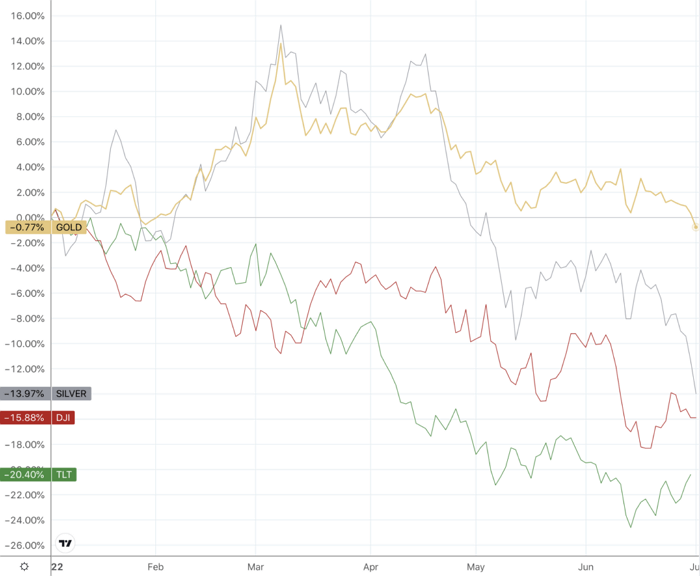