There was some extended focus on U.S-China trade-related news over the entire trading week following the August 15 rendezvous between both counties, which didn't materialize any progress.

On Thursday, China's commerce ministry announced that representatives from both sides would resume discussion "in the coming days." On a relevant note, the United States took more draconian steps to reduce Huawei's access to American components. Also, there was more trouble brewing with the sale of TikTok by ByteDance.

Five out of eleven S&P 500 market sectors finished the week's sessions with losses posted between the materials of -1.3% and energy -6.1%. In contrast, the communication services sector with +1.7%, consumer discretionary print of +2.4%, and hot technology a dandy posting of +3.5% were the ones that ended the in green territory.

The biggest stock gainers during the week of the S&P 500 were the consumer discretionary Amazon, technology Apple, and Microsoft, also communication services sectors Google's Alphabet Inc. and Facebook. Apple surged 8.2% for the fourth consecutive weekly advance. The rise in Apple’s share price hoisted the company status to the world’s most valuable company with a $2 trillion valuation.

The most significant stock market(s) in the Eurozone and Asia region, which lack behemoths like Amazon and Shopify, fell this week. In the Eurozone, where coronavirus infection rates had been increasing for the last couple of months, especially in Germany, France, and Spain, weighed heavily on sentiment.

Even with Friday’s market rally in the U.S. Dollar, Gold was trading well-heeled its lows, closing at $1,939, which is above the Key Support $1,910. Gold is remaining in the consolidation stage with 2020 gains price level. It's quite clear that Gold is in a bullish trend and has been able to overlook the Dollar’s gains and stay above the significant support. However, a continued consolidation around these levels reveals a very bullish medium to the long-term trend. 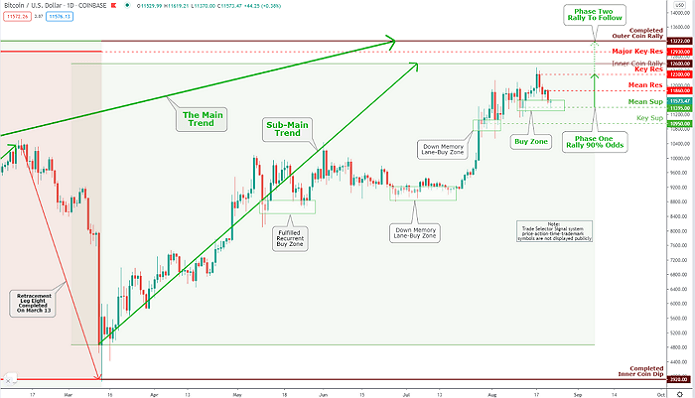 In the cryptocurrency world this Monday, Bitcoin's price broke out of the strong physiological resistance of $12,000. Before we could open a nice bottle of champagne and start celebrating, the price collapsed by forming a Key Resistance marked at $12,300, which is part of the TSS TARC symbol and retreated to the Mean Support $11,395 level - The retest of the TARC is expected.

In the meantime, we had a new star - Litecoin! The price of Litecoin climbed by a whopping 8%, compared to last week's session. Nonetheless, on Friday's market session, the cryptocurrency favorite lost somewhat in value.