Major market trading indices started the week by an advancing out record closes; however, the stock market sequentially looked unimpressed throughout the first week of the Q2 (second-quarter) earnings reporting season.

The leading indices showed a notable move towards the downside in the very late session on Friday, posting new lows for the session, as the anticipation for over a half-point interest rate cut diminished.

According to the official's current public comments and interviews, they are not planing for more daring action by offering a half-point interest rate cut, like many analysts, traders and investors have ventured on in past few days.

As we have been signaling our readers for a very long time about Gold bull market trading and investing episode: on July 17, leading business media news outlets was that Ray Dalio, patron of the world's biggest hedge fund, stated that Gold would be a topmost investment - read here.

Furthermore, in presenting his case in a "Paradigm Shift" in investing in Gold metal, Ray Dalio singled out what we at Trade Selector Signal have been prophesying for years: As global economies slow, all major central banks will develop monetary opiate doses in hopes of holding the cheap-money addiction in the bull markets running as their currencies depreciate.

Ray Dalio, in his LinkedIn post, wrote that investors are substantially too heavily loaded in the stock market trading and other assets which would most likely suffer declining returns. "I think these are unlikely to be good real returning investments and that those that will most likely do best will be those that do well when the value of money is being depreciated, and domestic and international conflicts are significant, such as Gold," the founder of the Bridgewater Associates said."

And meeting the economic as well as market trends are United States war drums beating loudly toward Venezuela and Iran. A real stake is present, in addition to the potential of extensive losses of lives and property, is the price of crude oil.

In the event, the conflict escalates, and crude oil prices will most likely spike above the $100 per barrel, it will knock off both stock markets and vest of economies worldwide on the scale of enormous proportions.

Further monetary stimulus by central banksters and the more economic indicators will support downward global growth, diminished world currency values, as well as rising chances for war: these are the components for Gold and Silver to shine in the future.

We maintain our outlook, where Gold, now is hovering around $1,425, following bridging magic $1,450 level and once sustaining value above $1,450 per ounce will move to $2,000 plus range - prepare for major Gold liftoff.

The Silver proceeds to move on its strength currently a very much independent of its usual attachment to Gold's price trend. The vital explanation behind the movement of the latest events in both metal markets can be said in two words – interest rates.

The Silver market trading rallied on Friday, to finish the week. The metal gapped at the beginning of the session and then exploded above the $16.50 level to complete our Inner Silver Rally $16.54. And as expected the metal has pulled back and is the process of confirming the rule of the Key Res $16.35.

The Silver market broke higher throughout the trading session on Monday and then stayed higher through the rest of the week, as shown on Market Insight & Commentary July 17.

Eventually, this is a market segment which should continue to draw-in plenty of buyers underneath. Despite the Silver pullback during the Friday trading session; we think it is just a blip on the radar screen as we continually observe the development of the critical resistance in progress.

That being said, the completion of the Inner Silver Rally is a normal process that given market products go through. However, we would also point out that a solid symmetrical Key Resistance like this is not to be ignored. In fact, this is a symbol once developed will show the eventual pause in the rally.

We believe that the Silver is eventually going higher and we will ultimately look towards the Outer Silver Rally $16.95 level and beyond. With all of that said, we are bullish; however, we also recognize that one should be looking for value. After all, the Silver market is somewhat choppy in general.

Looking at the chart below, it's likely that the metal needs to catch its breath. This is normal when you get a big rally move as we have seen thus far, so we are looking for an opportunity underneath. At this point, it is merely a matter of stepping to the sidelines and allowing the metal to show us strategic entry points.

The alternate scenario, of course, is that market trading breaks above the top of the completing Silver Rally formed on Friday session, the simple question remains whether it has more fuel left in the tank before consolidation kicks in. Currently, the significant support level is marked at Mean Sup $15.95, Mean Sup $15.50 and ultimately Key Sup $15.00. 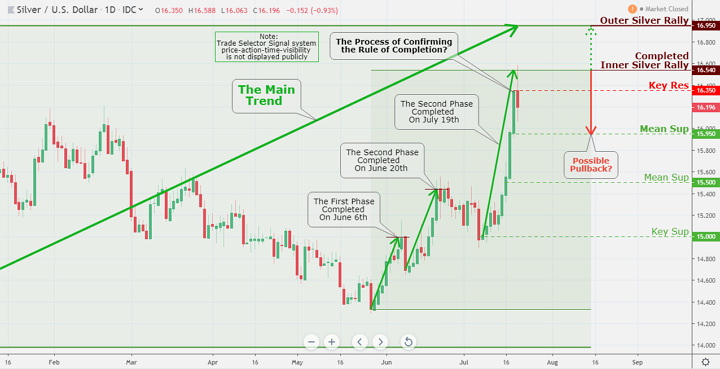