Gold and Silver prices are up. Silver's carrying strength continues to fascinate the market participants. It's up another 18¢ and $16.52 on the day. Undergoing a minor sell-off following completion of Inner Silver Rally $16.54 was brief.

Both precious metals continue to challenge the annual summer season doldrums having posted robust price gains in what usually is the most inactive trading month of the year for both metals markets.

The Silver is up to $1.24 this month as of this current session pricing at 7.7%. On the other hand, Gold is up to $43 or a 2.9% increase. A significant unknown hanging over the Gold and Silver market at this point is whether the U.S. is prone to meddle in the foreign exchange (Forex) market attempting to weaken the U.S. Dollar.

Silver is definitely driving the metals market as we began the week for sure to be ruled by trade concerns, and interest rate announcements, not to ignore the possibility of the further ratcheting of strains of war in the Persian Gulf.

Let's face it Yellow metal is in an unassailable, unruly, rapidly accelerating bull market and the one that will draw Silver base metals supply, to brand-new resurrected highs prices way above the 2016 highs and at least $20 price level.

Having Gold and Silver prices going up, Gold is the passing leader who will relinquish its dominance to Silver as the second vital up phase kicks into gear. The Silver should be capable of grabbing the mantle of dominance by the end of the summer season.

The vital key will be its achievement throughout the seasonally weak month of July. Thus far, it has been a well-defined change over the May, June, and July window. 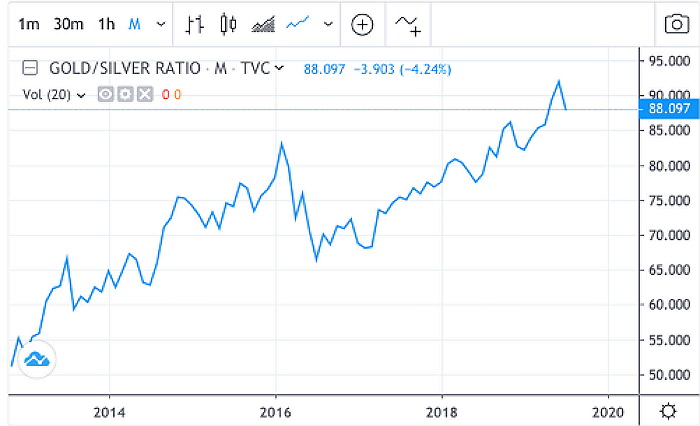 Gold to Silver Ratio Chart (Click the Image to Enlarge)

At approximately 90 to 1, is the current ratio, it is the highest ratio in almost thirty years. In 2010 precisely two years after the Lehman Brothers Holdings Inc. collapsed, the ratio declined to 30 to 1.

The spread separating those two ratio numbers signifies a potential opportunity which doesn't come along all that frequently in the precious metals markets.

Financial market players are feeling very jumpy these days. During the run-up till the July European Central Bank meeting tomorrow (July 25) and this month Federal Reserve meeting commencing next week in which both central banks are anticipated to take dovish monetary policy action.

Astute investors and traders have been silently accumulating positions in the precious metals market as Gold and Silver prices are moving relentlessly. Historically precious metals seldom outperform other asset categories unless fear is beginning to grip market players.