Both the S&P 500 with +1.5% (Act surprised) and the Nasdaq Composite with +1.7% postings set record highs in this macro-driven trading week that highlighted the Fed data, economic numbers, earnings reports, and international trade news. The DJI Average climbed 1.4%, and the small-cap Russell 2000 index rose 2.0%.

The Federal Reserve is an excellent spot to begin after the rate cut target range for the fed funds interest rate by 25 bps to 1.50% -1.75%. The stock market foresaw this; however, the Fed warned that another quarter-point rate cut should not be expected anytime soon.

Federal Reserve Chair Jerome Powell reckoned that he would like to see a notable rise of the inflation for an order for the rates to rise, hinting that the central bank is on hold as expectations for significant inflation increase continue to be relatively low.

The stock market took the latter point positively as the S&P 500 index jumped to new all-time highs on Wednesday's session, further was then bumped by a much better than anticipated employment news and better than dreaded ISM Manufacturing Index for the last month on Friday.

For the week's end of trading, eight of the eleven broad S&P 500 index sectors moved up, as the health-care value-oriented industry posted +3.0%, the cyclical information technology showed a +2.1 % rise, while industrials advanced +2.0%, and volatile financial sector posted +1.5%.

Dejectedly, the real estate sector lowered by -0.7%, the energy sector was down -0.3%, and the utility sector posted -0.1% of these three were sidelined while the rally moved-on. Also, growth stocks missed the boat after their earnings reports were published.

Jobs growth expectations were defeated due to the 40-day strike at General Motors, though the 128,000 non-farm payrolls totaled to the nation's economy bettered not only street estimates but also reflected positive revisions for the month of August as well as September.

One vital piece of information should be noted that the manufacturing sector continued decreasing for the third consecutive month.

However, there was yet more good than bad news for the stock market to absorb: Interest rates are forecasted to continue to be low between a resilient employment market and moderate inflation levels, the United States and China remain far apart in solving a trade deal, and Facebook Inc. and Apple Inc. reported solid third-quarter results.

As for trade war, it was announced that China had shown reservations about achieving a broad trade deal with the United States. Still, the United States Trade Representative (USTR) reportedly stated that a big step forward had been made in resolving outstanding matters.

Phase one deal is also in the plan to be endorsed later in November, however, not at the proposed Asia-Pacific Economic Cooperation (APEC) summit scheduled in Chile as a consequence of the continuous demonstrations in the country. 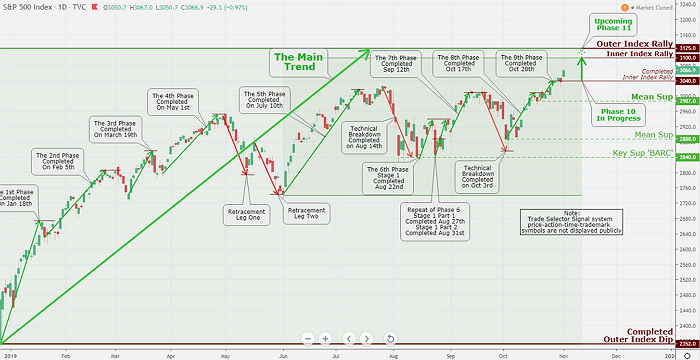 The S&P 500 market is looking particularly strong at this time, especially after the completion of Inner Index Rally $3040 - The 10th Phase is in progress towards the latest marked Inner Index Rally $3100, unless otherwise specified (BARC or TARC symbols) the is nothing but air.

The downside main support level is inverse completed Inner Index Rally $3040, while the other significant support is marked at Mean Sup $2987.