The market in the earlier part of the abbreviated week's session was very calm, as the S&P 500 index dropped two points on Tuesday trading; however, it succeeded in gaining six points on Wednesday. That disguised a strong start from the energy sector, with a 6.7% gain for the week, enlarging its year-to-date improvement to 45.3%. The energy sector benefited from a  rally of 5.0% in increasing crude oil price, which escalated to $69.61/bbl, its most high-priced level since the middle of October 2018.

The growth sector market noted some weakness on Thursday's session, pressing other sectors like communication services, consumer discretionary, and technology. However, these sectors bolted on Friday as US Treasury yields declined in response to a softer than expected May's employment condition report. Communication services and technology gained 0.6% and 1.2% respectively for the short week, while the consumer discretionary sector succumbed 1.0%.

The preceding trading week marked renewed stock volatility that made news headlines earlier this year. AMC mounted 95.2% on the Wednesday session and augmented 83.4% for the week as Bed Bath & Beyond and GameStop gained a respective 13.3% and 11.9%, respectively.

Global stock market(s) finished the final week of May in a cheerful tone. The materials and energy sectors were rooted contributors as West Texas Intermediate (WTI) crude oil prices extended their gains ~ 5%. US bond yields remained to trade sideways, notwithstanding substantial US economic number revisions, a firmly rising employment sector, and a higher expectations inflation picture (though not whole that surprising). In contrast, Gold and Copper increased 1.2% and 4%, respectively.

Gold and Silver market sell-off accrued on Thursdays when the Gold price fell $38 and Silvers was hit with 72 cents loss. The Swap category was getting into huge trouble with many of their short positions and an optimistic view of private-sector payrolls announcement.

The ADP (Automatic Data Processing) Research data pushed the dollar’s TWI (Trade Weighted Index) higher by 50 basis points. They delivered the reason for a wild markdown for both Gold and Silver metals. The experience that failed to accomplish anything was reinforced on Friday when both metal prices rallied to recover the majority of the lost ground.

On Thursday, Elon Musk published the following tweet a little past midnight, with the hashtag Bitcoin and a broken heart. The meaning isn't very cryptic; Musk's love for Bitcoin is over.

However, after the tweet, things took a turn for the worse. In less than 15 minutes, the Bitcoin price fell by more than $1,000 (€825). Counting from midnight, the price has already fallen by 7%.

On the 5-minute chart below, we indicate the moment of the tweet with the black arrow. Is the drop-off a direct result of Musk's tweet? It's impossible to say if there's a natural market drop with this. Though, once again, the timing is very striking. Can Bitcoin recover? Let's keep an eye out for all the action this weekend. 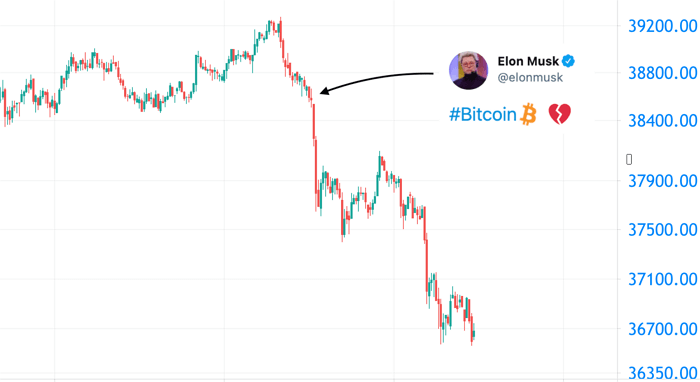