I realize many of you are disturbed about the market's current price action with the recent volatility. The pullback we have been enduring has caused many traders and investors to be frightened. But, this “discount” window might not remain for too long. There are early indications that equity indices such as the S&P 500 index are succumbing to bullish momentum. However, as the old stock market adage goes, sell in May and go away might be true.

I have not been this enthusiastic about the markets opportunity in years as one of the greatest significances I see taking shape at this time. It may sound strange to hear me speak about this, but I would be troubled a great deal if the markets did not retreat as they did after that kind of momentum run.

As I have stated previously, the Biden administration’s introduced tax changes are a grave concern. While it is yet unclear whether or not the tax increases will be forced through, they might have a much more profound and more enduring consequence on the American economy than the markets volatility we have faced now.

The Fed’s massive money printing scheme is another matter. From where I'm sitting, I see, the Fed will reasonably print more than $10 trillion in two to three years.

And these irresponsible fiscal, monetary policies are now causing widespread inflation for American consumers. We can see it in commodities, food prices, gasoline prices, and real estate prices. These things profoundly concern me. Still, we do have numerous good things going for us at the moment.

Interest rates are currently near record lows; therefore, more “dry powder” is available to be traded and invested than ever before. VC (venture capital) investments are currently at record highs, prompting incredible innovation and many new jobs. The COVID pandemic is essentially over in the United States, and everyone will soon return to work within the next two/three months as the nation's economic recovery proceeds forward.

To be quite clear, if these optimistic dynamics were not taking place right now, I would be frightened for the stock markets. If the spike in the inflation rate will take longer than we anticipate to happen, there still will be a very healthy environment for the markets as a whole.

The fundamental fact is for us to be entrusted to trade and invested in market sectors and companies expanding much faster than the rate of inflation. By doing so, we can significantly beat the markets and generate solid returns.

This week's market featured a lot of rotation and churn between value and growth stocks, making a soul-crushing performance at the indices class. The small-cap Russell 2000 with -0.4%, DJI Average with -0.5%, and the S&P 500 -0.4% ended with modest losses, while the Nasdaq Composite with +0.3% rose modestly.

The market seemed to be glued to the "peak growth" stories this week after April existing home sales, April housing starts, and the Philadelphia Fed Index for May, all slow down on a month-over-basis footing. Preliminary numbers out of the IHS did exhibit service-sector and manufacturing movement to accelerate in May.

Interestingly, this week's heavy selling in the crypto market likely served as a warning that it might be a prudent approach to take some profits of the table for stocks that were up notable this year.

Contrarily, traders and investors slouched defensively on the information technology with +0.1%, consumer staples with +0.1%, utilities with +0.3%, health care +0.7%, and real estate with +0.9% sectors. Given, the outperformance of the technology sector was very much more likely a role of traders and investors biting into beaten-down growth equities.

The growth stocks bolstered the S&P 500 index to climb back near its Mean Sup $4,165 after briefly felling below the critical technical, fundamental support level marked at $4,125 for the first time since April 6th.

Elsewhere, the FOMC Minutes from the last month's meeting unveiled that some participants believed it might be relevant to start talking about reducing asset purchases in future central bankers' meetings if the U.S. economy proceeded to make speedy progress towards the Fed's intentions on inflation and employment.

However, the market did not react too appreciably to this passage; it could be argued due to a sense that it might have been more unexpected to see no remark of the need to begin talking about lessening asset purchases.

Global stock market(s) fainted, with the US and Chinese stocks carrying the brunt as numerous inflation data surprised the plus side. Unsatisfactory credit numbers coming from China piled on. The scorching inflation data dealt a big blow to fixed-income investors, as bond yields rose significantly.

Longer-term yield rates climbed more than short-term, augmenting the yield curve. The Ten-year yield declined one basis point to close at 1.63%, signifying that the U.S. Treasury market is not that concerned about climbing inflation and is siding with the central banks to observe that the inflation 'rate will be transitory.

What a trading week for the precious metal market

Gold and Silver had a healthier trading week, with a mighty Monday session. Gold stayed higher with a daily incremental increase, although Silver settled lower from an inspired spike to reach $28.75 on Tuesday's session to ride down subsequently. For the week, Gold is up $38 from last Friday’s close session. Silver, however, is up a net of $0.12  on the exact timetable.

Trading volume in the Comex Gold exchange was the highest in recent months, partly matching contract rollovers to August from expiring active June contract. OI (open interest) has also climbed considerably in recent trading weeks, as shown in the chart below. 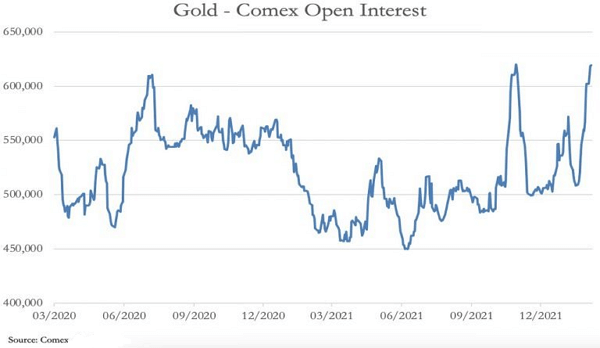 In other news headlines, the FOMC circulated a statement that admitted that uncertainties regarding their standpoint have risen. However, the central bank group has not altered their expectations of overall inflation stand at 2%. This is notwithstanding extensive rises in many commodity prices, continuing logistic disruption, and labor shortages. Right after the FOMC announcement, the U.S. Dollar’s trade-weighted index slid towards new lows.

It is also deserving mentioning that the cryptocurrency market crumbled greatly this week, with Bitcoin trading down as low as $30,000 from its April 14 high of $65,000. As of this writing, Bitcoin is trading under $40,000, and it looks as if that Key Sup $30,430 might be retested again.

If you're trading cryptocurrencies for a while, you know that following the price every day could be a nerve-racking time occupation. However, this week's price action beats everything. In just one week, the Bitcoin price fell by a staggering $18,000.

At least, if you measure it from top to bottom. But what's the reason, apart from blaming Elon Musk for everything? There could be several factors, for instance, trading Bitcoin futures.

According to data from ByBT, as much as 9 Billion dollars positions were being liquidated just last week. And when coins are being sold, this causes a severe sell pressure on the market, which leads to an even further decline in Bitcoin's price. This domino effect is also called a 'long squeeze', which refers to long traders being 'squeezed out of the market.