The stock market experienced some volatility over the past few days; however, both the S&P 500 index post +1.8% as well as Nasdaq with +2.0% have been able to show significant gains for the week, while the Dow Jones with +0.3% did not perform notably, ending the week barely above its flat level. The small-cap Russell 2000 index also lagged, dropping 0.4%.

The S&P 500 index battled with its Mean Res 4470 but was able to finish the week with a higher level than the mark and hit a six-week high in the final trading session of the turmoil week.

Ten S&P 500 market sectors finished the week positively, with energy posting +7.4%, materials with +4.1%, and utilities with +3.5%: these were sectors ahead of the pack. Meanwhile, with -0.2%, health care saw a slight decline after outperforming earlier in the month.

The energy sector market was supported with crude oil that increased $10.80 or 10.5%, to finish the trading session at $113.83/bbl. The ongoing Russian special operation in Ukraine was a significant factor in the support for crude oil and other commodities, resulting in the strong performance in the material sector, where fertilizer and steelmakers producers were the leading players.

The trading week concluded with reports of another crude oil release from the strategic reserve holdings as Chevron reportedly had been granted permission to restart operation activities in Venezuela. Similarly, a Russian energy official has allegedly stated that countries with friendly relations like China and Turkey can pay for gas and oil in domestic currency, rubles, and bitcoin. However, unfriendly countries will have the option of paying in rubles or gold.

The top-weighting technology sector with +2.3% completed the week's trading session way ahead of the broader market overall. However, it was under pressure on Friday when U.S. Treasuries increased this week's losses, dropping to new levels for this year following Citigroup saying that the Fed will raise rates by 50 basis points during each of the four upcoming policy sessions. The Two-year and Ten-year yield notes rose by 34 basis points for the week, reaching 2.29% and 2.49%, respectively.

European equity market(s) were mainly up, and the market continued to pay attention to the ongoing conflict in Ukraine and its economic effects. The majority of significant sectors experienced improvements, while industrials were in the spotlight.

Stocks in Asia ended mixed due to the whirlwind of headwinds triggered by the Russian special operation in Ukraine currently raging within Eastern Europe and increasing energy and other commodities prices.

Following the late metal market sell-off, gold and silver metals are engaging in a period of a pause from its continued push toward the significant $2,000 mark as traders and investors weigh the possibility of an inverting interest yield curve, creating stagflationary pressures, and the case of a prolonged confrontation in Ukraine.

Both metal market(s) rallied this week, with gold closing the week at $1,958 and up $37 from last Friday's session, and silver metal closed at $25.48, up 54 cents on the same period. Year to date, the yellow metal is up 8.46%, white metal is up 11.83%, and equities are down 5.76%. Both metals' trading action on the Comex exchange was quashed; however, turn for the better somewhat yesterday's session. 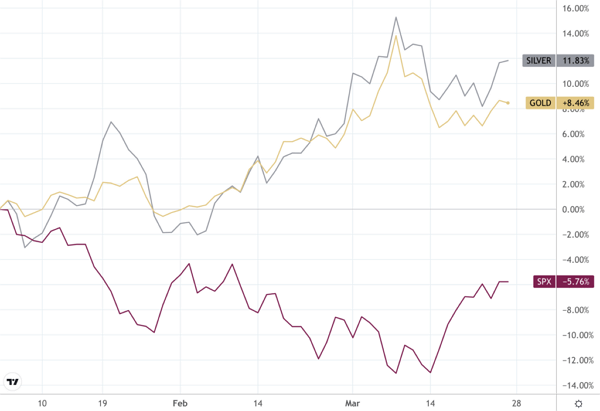 Bitcoin market on Friday's session briefly traded above our Key Res $44,400, a significant psychological price level, as many financial institutions drove further into the digital asset space. At the same time, Russia implied the potential scenario of accepting bitcoin as a settlement for its vital commodities.

In further news this week, crypto adoption (especially bitcoin) in Malaysia and Honduras is still a long way off. However, that doesn't mean that they are entirely opposed to the idea of crypto.

Although the future looks uncertain for crypto, this is not the end of the story. Both Malaysia and Honduras see a lot in creating their own Central Bank Digital Currency (CBDC). In other words, digital money from the central bank.

There are no concrete dates when a CBDC will come to Honduras and Malaysia. The central bank of both Malaysia and Honduras are currently still in the research phase. Time will tell how this will develop!