The S&P 500 market with -1.9% and Nasdaq Composite posting -0.3% commenced the week at record highs; however, the benchmark index finished the week down 2% as value and cyclical equities sold off after the Federal Reserve's monetary policy meeting. The DJI Average with -3.5% and small-cap Russell 2000 with -4.2% yielded heavy losses.

From a market sector viewpoint, the information technology sector with +0.1% was the only sector with a positive finish, others: industrials with -3.8%, energy -5.2%, the financials -6.2%, and materials -6.3% were the sectors were significant losers. 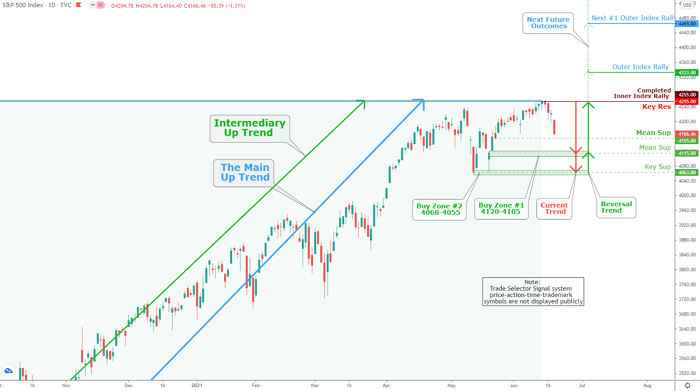 The Federal Open Market Committee (FOMC) made no adjustments to the fed funds interest rate or the velocity of asset purchases, as anticipated, although the median projection for the path of rates flagged two rate hikes in 2023; what?: This is like saying to a drunk stop drinking in two years and then asked where to put this case of booze? - Seven members of the committee, however, foresaw an interest rate hike in 2022.

The concern, though, was that the news from the Federal Reserve supported the thriving view that growth rates, and inflation rates, are come to a head as the direct effects from reopening the US economy subsides.

The Ten-year yield declined one basis point to close at 1.45%, respecting the Fed's outlook on ''transitory'' inflation factors, notwithstanding the fed-funds-sensitive Two-year yield surged 11 basis points to finish at 1.27%. The U.S. Dollar Index soared 2.0% to close at 92.32.

The reflation story was further unwinded by pressured a string of other developments: ex-oil, commodities, proceeded to pull away from recent highs (copper futures plummeted 9%); initial weekly job claims surprisingly increased; retail sales for last month were weaker than anticipated, and Citigroup and JPMorgan Chase advised of future lower trading revenue for the second quarter of 2021.

Gold and Silver market moved to the downside ahead of Basel III (June 28) as the commercial and bullion banks were trapped short; therefore, they had to make a move to unwind the short positions of the paper contracts pronto before the implementation of Basel III which is lurking around the corner.

In the overseas markets, stocks across the Asia-Pacific space turned in a chaotic performance last Friday. In Japan Nikkei 225 Index declined by 0.2%, while HK's Hang Seng Index improved by 0.9%.

Meanwhile, the dominant Eurozone stock markets all moved sharply lower. The U.K.'s FTSE 100 Index tumbled by 1.9%, the German DAX Index went down by 1.8%, and the French CAC 40 Index slumped by 1.5%.

The selling force around the Eurodollar (European currency) remains well in place and forced EUR/USD pair to let the cat out of the bag with the extra ground to fresh two-month lows hitting our Mean Sup 1.1870. Since Wednesday's trading session, the EUR/USD is down as much as 2%, dropping nearly three cents to new multi-week lows.

The crypto market has closed the week in the red after relinquishing all of its earlier made gains. A granddaddy of alt-coins is recording considerable losses as the overall crypto market trend has turned from red hot to mum over the past several weeks.

As of this writing, Bitcoin continues to move lower after running into our resistance at Mean Res $40,285 signaled on Update Idea earlier in the week (June 13). A primary short-term ascending trend has been formed since June 14, and the price downslope is now coming towards Mean Sup $33,445, leaving Bitcoin vulnerable to visit our Key Sup $30,430 and long awaiting Outer Coin Dip marked at $29,456. As always, weekend-thinned crypto markets leave the cryptocurrency market exposed to very sharp movements.