THIS WEEK, the S&P 500 market dropped 1.6% due to a sharp increase in inflation-related changes. The disappointing growth-stock earnings reaction and persistent concerns over the likelihood of a Fed policy lapse further impacted the risk sentiment. The Dow Jones Industrial Average index tumbled 1.9%, The Nasdaq Composite declined 1.8%, and small-cap Russell 2000 index fell 1.0%.

The traders and investors took a step back and sought safety in U.S. Treasuries. The Ten-year note yield dropped three basis points, close at 1.93%, following a high of 2.06% in mid-week. Ten of eleven S&P 500 market sectors finished in the red for the entire week.

The energy was by far the worst performer sector suffering a 3.7% drop as crude oil price declined by $1.88, or 2.0%, briefly felling under $90 per barrel due to reports suggesting that an agreement on the nuclear deal with Iran could be within reach. With a plus 1.1%, the consumer staples sector was the highest performer.

The Fed-funds-sensitive Two-year note yield has slid five basis points to close at 1.47%, which suggests that the Fed's policy change has already been priced into the geopolitical climate, which could lead the Fed to be much less hawkish than initially thought. The odds of the Fed to hike its rate by 50 basis points in March was reduced to 21.1% from 49.2% in the week prior, per CME's FedWatch Tool.

Eurozone stock market(s) ended the week in a lower position, as the needs focused on the impact of geopolitical tensions. In the meantime, global markets are still grappling with the possibility of tighter monetary policy on both sides of the Atlantic.

The expectation has been amplified due to recent reports of January's inflation in the United States, which also have occurred following an increase in rates by the BOE (Bank of England), raising the rates for the second consecutive time earlier in the month, and also after the ECB (European Central Bank) rang a more hawkish tone after its meeting in February.

Stocks across the Asia-Pacific region ended mixed as market(s) struggled with a lack of economic data. However, Japan announced that its consumer price inflation was lower than was expected in January.

People's Bank of China (PBoC) has not followed the pattern of other central banks and has changed its monetary policy to be looser. BOJ (Bank of Japan) announced recently that it would purchase its Ten-year bond benchmark for the first time since the beginning of July of last year to prevent rates from straying from their desired range.

The gold market had a big breakout this week. Massive volume, downright monster volume. It seems somebody was attempting to keep the gold price in place, whereas we saw the contract volume burst upside, and the price action got held up at a psychological $1,900 level.

Both metals, gold, and silver climbed this week substantially, continuing the price rally from earlier this month's depressed levels. On Friday's price action, gold closed at $1,898, up $40 on the week, while silver metal closed at $23.90, racking up 36 cents.

Meanwhile, the short-term technical outlook suggests that gold is overbought and expected for a takedown before rising further. This argument appears to be backed by the enormous increase in OI (Open Interest) on the Comex exchange, which has significantly increased this week. 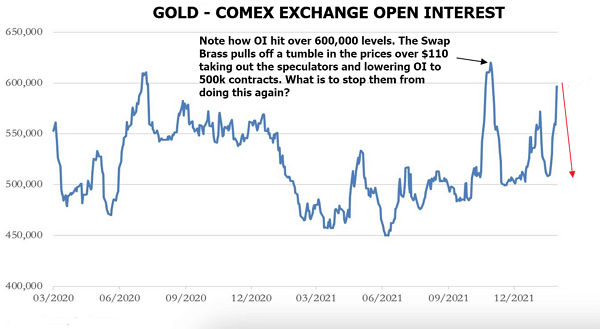 There is no question that the commercial and bullion banks, deliberately or by design, were working side by side to manage the gold price to their advantage. This is why traders and investors may complete a few profitable trades by taking the money off the table. We all are against Keynesian economic ideology in the central and general banking community supported by unlimited credit creation in their derivative market dealings.

Bitcoin is still playing a game of ping-pong, and no decision has been made yet. Although price action signals point towards a bearish future, some bullish scenarios are also possible. What will it be? See this chart.