The S&P 500 market increased 3.8% in the past week and finished at a record-high after reacting to worries regarding Omicron. Also, the market responded positively to the recent hot data on consumer inflation in the U.S. The DJI Average with +4.0%, and Nasdaq Composite with +3.6%, were two indices that climbed over 3.5% points, while the small-cap Russell 2000 rose 2.4%.

Each of the eleven S&P 500 sectors closed the week with more than 2.5% gains. The information technology sector with +6.0% was the most successful; however, the consumer discretionary sector with a 2.5%  increase was on the opposite scale.

The bulk of the gains was recorded in the initial two days of the week trading session based on the confidence that the Omicron variant was not as harmful as believed.

The news that also supported the market rally was forthcoming from lawmakers in their efforts to raise the debt ceiling. The main event in the weekly session came from an announcement of the Consumer Price Index (CPI) report for November - large-cap stocks embraced it.

The whole CPI rose 0.8% month to month during November, making it 6.8% year to year, with the highest annual growth since 1982. Core CPI that excludes energy and food items rose 0.5% month to month, which was expected and was higher by 4.9% over the year to year. So, pay attention to what policymakers do, not just what they say. In other words, they need inflation. They want inflation. In the meantime, they act as if they are "combating" it.

Stocks responded positively to the report, likely because inflation is often an indicator of a robust economy and gives companies the ability to price to increase their earning potential. The most exciting price movement was seen in the U.S. Treasury market that held its position despite the potential effects of the more assertive Fed.

The market volatility is likely to persist with uncertainty over the final effect of the omicron variant and the speed and timing at which the Fed will constrict its monetary policy.

It is worth publicizing that U.S. Treasury yields could have anticipated the news. Comparatively to last Friday's rates, The Ten-year yield climbed 15 basis points to close at 1.49%; the Two-year note yield climbed by eight basis points and reached 0.66% closure.

European equity market(s) ended the day in a downtrend; however, they maintained this week's gains. Investors watched Friday's Consumer Price Inflation report within the U.S. The majority of sectors saw lower postings led by Information Technology and Industrials; however, Consumer Discretionary issues managed to gain.

It was reported that Italy's FTSE MIB Index and U.K. FTSE 100 Index were down 0.4%, and France's CAC-40 Index yielded 0.2% while The German DAX Index declined 0.1% while the Spanish IBEX 35 Index dropped 0.5% in comparison to Swiss's Swiss Market Index which was flat.

Stocks in the Asia-Pacific region were generally lower, completing a turbulent week. The markets continued to process central bank decisions made this week across the region since central banks from Australia and India each have decided to keep their policy of monetary policy unchanged. Regarding economic news from the Asia-Pacific region, Japan's initial machines tool order report from November indicated a lower demand; however, it was still strong compared to a year ago. Additionally, China's November total financing - a measure of full credit issued - was lower than expected as the country's newly published loan Yuan also increased less than anticipated.

In the nation of rising, sun Nikkei 225 Index fell 1.0% as the Yen cut yesterday's gains towards the end of the session. China's Shanghai Composite Index dipped 0.2%. Its H.K., Hang Seng Index decreased 1.1%, and the Indian S&P BSE Sensex 30 Index was unchanged, while the S&P/ASX 200 Index of Australia dipped 0.4%, and the South Korean Kospi Index progressed lower posting a 0.6% loss.

The Euro Dollar and the British Pound were slightly higher contra the U.S. Dollar Index, as the index decreased 0.1% to close at 96.03. In contrast, bond yields within the European market were mixed, with rates in the U.K. being lower.

The Silver and Gold markets cannot find a foothold when they fight within the current consolidation pattern. The fight between bears and the bulls in the Gold market was between Mean Sup $1,768 and Mean Res $1,810 levels. Silver was fought at Key Sup 21.50 and Mean Res 22.50. Silver appears to suggest that the bears took over the market again.

Does this mean that Silver and Gold have lost their sparkle to the world of cryptocurrency? not in any way; both precious metal prices are suppressed. There will come sooner rather than later when the metals price will be able to free themselves from the shackles they are locked in. 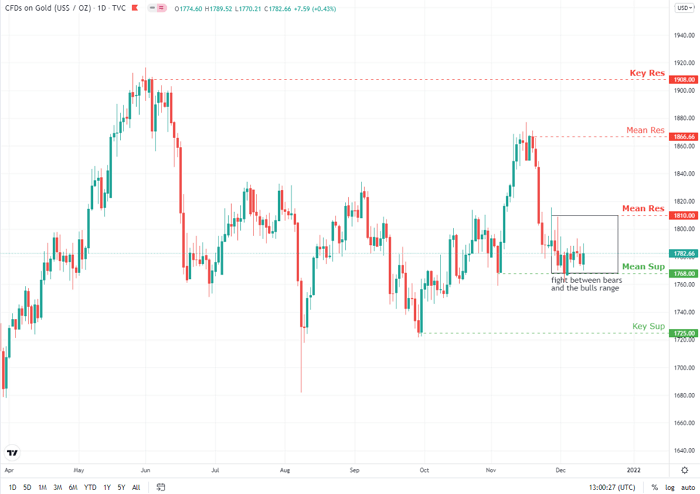 Bitcoin boosted over $2,000 in minutes on Friday, Dec. 10, when the U.S. CPI data showed that inflation in November was much higher than expected. However, Bitcoin's gains in the short term were not sustained for long, as the cryptocurrency dropped back to under $50,000. The most famous cryptocurrency is trapped in a downtrend with no apparent upside bias until it retests our completed Outer Coin Dip of $45,500 and possibly hit the Key Sup $40,700.

These price fluctuations, we believe, show that the crypto market, despite "consolidation" and "adoption" difficulties, will never be valuable stores of value. Still, very volatile and thrilling speculation assets, even though we have heard of crypto-related circles that will not listen to the warning and thoroughly disagree with the recent signs we are receiving regarding quantum hacker risks.