The U.S. stock market muscle out another triplet of record closing for the DJI Average with +0.8%, the S&P 500 with +0.9%, and Nasdaq Composite with +1.1% this week, as a supportive round of economic numbers, backed risk sentiment. The small-cap Russell 2000 advanced 1.0%, keeping in step with its large-capitalization peers. 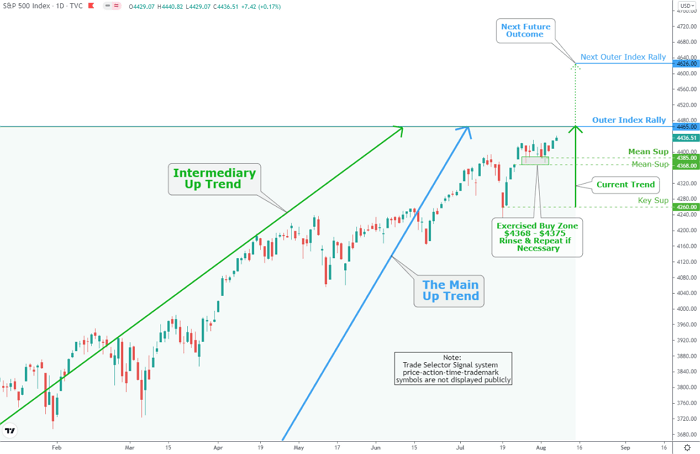 Simply put, the Index is advancing to our designated Outer Index Rally $4465 as projected on S&P 500 Weekly Daily Chart Analysis For June 14, 2021. The main support level stands marked at Mea Sup $4385. Be safe and trade accordingly.

Weekly enduring jobless claims fell below three million for the first time since the beginning of the pandemic.

The outcome message was that the U.S. labor market, the services sector, manufacturing, and trade activity sectors proceeded to paint an excellent recovery in the economy. Remark, the employment release numbers supported the case for the Federal Reserve to reconsider tapering asset acquisitions much sooner rather than later.

Growth stocks and value stocks arose together, unmistakable by the 0.9% gains in the Russell 1000 Growth Index and Russell 1000 Value Index. Ten of the eleven S&P 500 sectors added to the rise, guided by the financials sector with +3.6% and the utilities sector with +2.3%; these were the sectors showing solid gains. There was an absence of other sectors rising more than 1%. The consumer staples sector with -0.6% was the only one that ended in negative territory.

Other market supportive circumstances held good earnings headlines from plenty of companies, Merger and Acquisition (M&A) activity, and a clinched text of the bipartisan infrastructure bill of $1 trillion that the U.S. Senate intends to vote on this weekend.

The Ten-year note yield traded as low as 1.13% this week amid peak inflation and growth expectations, but never the less settled the week at 1.29% basis points (bps) or five bps higher than last Friday's closing. This resilience aligned with a pro-growth frame of mind.

The most market trading action was in emerging markets, particularly with Chinese large-capitalization stocks (many represented by high technology), the private education sector, and the property sector; Chinese officials have been pursuing a regulatory crackdown on various sectors to promote social equality, privacy and data security, consumer rights and what they consider as unfair or monopolistic competition.

Uncertainties and fear of foreign control and access to Chinese information also imply an expansion in oversight of Chinese companies listing on many foreign exchanges signaling that the getting tough likely is not over; however, perhaps a mellower touch is ahead.

Gold plummeted sharply below the $1,800 mark by robust advancement of the U.S. Dollar and triggered a tsunami selling wave in the paper gold market. It is down $52 for the week's session, settling at $1,762. Silver is down a whopping $1.14 for the same period finishing at $24.31.

This month we are celebrating the fiftieth anniversary of the Nixon dethroning Gold shock when the Bretton Woods deal was suspended. And also, the vast expansion of U.S. commercial banking into credit for solely financial movements became a fundamental principle to the advancement of the U.S. Dollar as the international surrogate for Gold.

With the initiation of Basel III, all commercial banks enter a new epoch of diminishing engagement in the derivative market. The nominal value of the whole derivative market at the end of 2020 amounted to more than sevenfold of the world's Gross Domestic Product (GDP). As we are preoccupied with the consequences on precious metals markets, they are simply a tiny portion of the vast Basel III picture.

In summation, bullion banks and commercials retreating from derivative markets are bound to produce replacement needs for physical Gold that can only boost the price and further weaken fragile confidence sentiment in most fiat currencies at a time of fast-increasing global monetary inflation.

July was an especially volatile month for Bitcoin, the cryptocurrency market leader in capitalization and price index among the more than 11,000 crypto tokens listed. The exceedingly costly virtual currency, which resulted in a downward trajectory very early in the month, changed the course, succeeded by moving from the seven-month low of $29,300 encountered on July 22, and rallied past our designated Mean Res $40,450 by reaching $42,600 on August 1 gaining over 45% in less than two weeks. Currently is on its way our Mean Res $46,580, and Inner Coin Rally $50,130 as projected on Bitcoin (BTC/USD) Weekly Daily Chart Analysis For July 26.