The principal trigger for the rise in interest rate increases was Fed Governor Brainard (FOMC voters), who expected that the Fed's balance sheet would shrink significantly faster than during the previous recovery - beginning in May

The March Federal Open Market Committee (FOMC) Minutes revealed Brainard's hawkishness. Brainard's hawkish stance by stating that participants generally agreed that it was proper to reduce the balance sheets by $95 billion each month (about $60 billion in U.S. Treasury securities and around $35 billion for MBS) as well as that at least 50 basis points increases in the federal funds rate may be appropriate in future meetings.

The rates for shorter-dated also increased, with the Two-year yield rising by ten basis points to close at 2.52%, amid expectations of a rate hike. The longer-dated market rates were also boosted thanks to the latest ISM Non-Manufacturing Index, which indicated an increase in the Prices Paid Index reading of 83.8% - its second-highest reading in history.

In essence, the Fed news raised fears regarding the central bank possibly making a mistake in its economic policy, which could send the economy deeper into a recession, lower earnings potential, and affect valuations. Growth-stock valuations were affected due to the rapid increase in interest rates this week.

The S&P 500 information technology sector with -4.0%, consumer discretionary sector with -3.3%, and communication services sector with -2.7% sectors that are home to the mega-caps were influential weight-in on the index. The industrials sector with -2.6% was likewise very vulnerable amid continuous bleeding in the transportation market space.

Additionally, it's important to remind readers that growth stocks were the subject of a speculative bid on Monday following Elon Musk's disclosure of a 9.2% holding of the Twitter stock. Musk was subsequently named to the company's Board of Directors and reclassified his stake as an"active" position participant.

The gold and silver market showed an excelent growth on the week, with yellow metal trading at $1,946, up $22 from last Friday, and silver at $24.71, up 10 cents. In the first trading session week of the first quarter, Comex's contract turnover for gold was lower, albeit it lifted for white metal as the week's session progressed.

The metals price action for the year thus far showed gains of 5.5% for gold and silver. Physical market demand for gold remains at awe-inspiring levels, with Exchange Traded Funds (ETF) showing a significant 350-tone cache gain in the Q1 and coin and bullion sales continuously showing at a near-record pace. 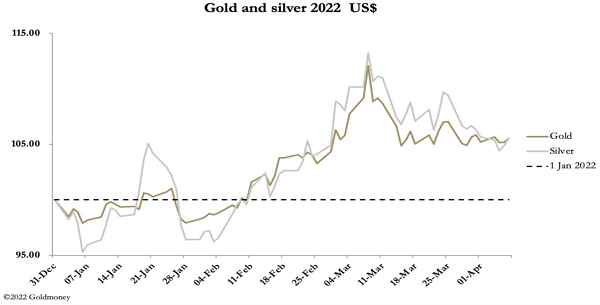 After embarking on a Key Res at $47,900 retest this month, Bitcoin has punctured coin sentiment by sliding into a direction to Mean Sup $41,100. In a classic price action, bitcoin responded unfavorably to a resilient U.S. Dollar, with the DXY index crossing above 100 for the first time since May of 2020.

The Ethereum (ETH) market impacts coin price due to the regulatory delay and possible competition from technology big boys. Following a 42% rally over the last three weeks, ETH turned down at $3,550 resistance on April 5 and retraced a 12%.

Technology giants are in the process of launching their smart contracts, and regulatory indecisiveness did influence traders' and investors' sentiment. Also, derivatives market metrics reveal deteriorating conditions that validate professional traders' transition into a bearish sentiment.