The S&P 500 market fell 2.8% this week in a bid to overcome worries about rising rates and Fed's hawkish approach. The Nasdaq Composite -3.8% and the small-cap Russell 2000 -3.2% did not perform well as the benchmark index, with losses exceeding 3%. The Dow Jones Industrial Average lost 1.9%.

Last week, the bullish sentiment among investors recently reached a 30-year low, creating the conditions for a rally based mainly on contrarian sentiments. The rally occurred on Tuesday and was briefly supported on Thursday before a bearish mood took control of the market.

Nine of the eleven S&P 500 sectors fell, and the worst performers were communications services with -7.7%, energy with -4.6%, and materials with -3.7%. The real estate geared towards defensive-oriented posted +1.2%, and consumer staples print +0.4% - These were the sectors that closed the week with positive numbers.

The market did well in avoiding Netflix's (NFLX) disappointing performance, in which NFLX fell 35% the day after disclosing a drop in subscriptions. As it turns out, the earnings report were generally higher than anticipated and were issued by an array of diverse companies, which included Tesla (TSLA) and seven Dow Jones members.

This week's issue was threefold primarily: a) the yield on Ten-year notes quickly approached 3%, touching 2.97% before ending the week with eight base points higher and closing at 2.91%. b) Fed Chair Jerome Powell wasn't prepared to declare peak inflation and said that the Fed might shift towards a tighter policy once the rate reaches a neutral level, and c) diminishing technical factors.

On the latter, the S&P 500 market couldn't stay at our Inner Index Dip 4337 and fell farther down: The target price is revisiting the completed Outer Index Dip 4150, and much lower.

Some additional thoughts about the Fed and the Fed's actions. It was not helpful to note that Chicago Fed President Evans, who is among the most dovish Fed members and expected to be an FOMC voter in the coming year, has revealed his plans for retirement in early 2023. Additionally, St. Louis Fed President Bullard, an FOMC voter, stated that the Fed funds rate would be 3.50% by the end of the year.

The yield on the Two-year note, which is sensitive to the Fed funds rate expectations, rose 27 basis points to close at 2.72%.

The European market ended with a wide range of losses. Stocks in the Asia-Pacific region were generally lower as markets absorbed the comments from central banks and various information on services and manufacturing data. 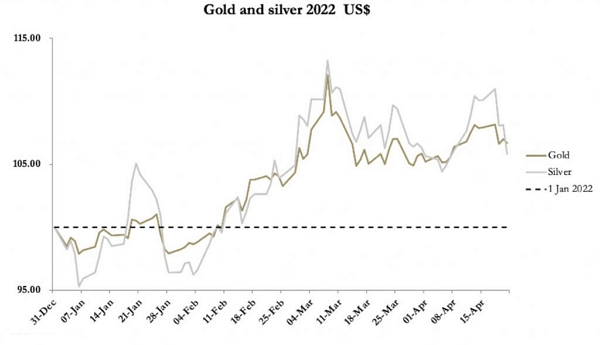 During a debate on proof of work (PoW), an official raised whether the European Union (EU) should ban bitcoin trading. Another unusual statement is that the EU should force the bitcoin community to produce PoW.

However, the European Parliament already banned anonymous crypto transactions earlier this year. Do you think bitcoin will survive these threats?