The Friday trading session in the Gold market was very unusual. And the fact that Gold closed almost at the highs of the day, while it kept-on pushing higher every time it attempted to pull back suggests higher prices are due to follow next week. 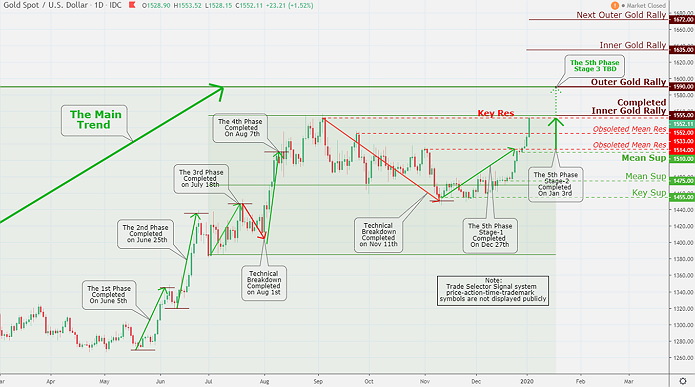 The stock market ended an outstanding 2019 on a quiet drive, starting a new year with a big bang, then yielded to some profit-taking after a United States airstrike intensified geopolitical tensions in the Middle East.

The optimistic, yet short-lived, incentive past week was China's announcement that it would lower the reserve requirement ratio for large and small banks by 50 bps on January 6. The adaptive policy contributes about $115 billion in extra liquidity that can be loaned.

Given the seriousness of the Middle East circumstances, the failing manufacturing numbers, and how far thus the stock market record run has become, traders and investors didn't overreact.

Selling influence was reasonably modest on the hypotheses that the geopolitical anguish is not something to get unduly concerned and that Fed's easing will aid the manufacturing sector in overcoming vulnerability.

In other worthy news, Trump said the Phase One trade agreement with China would be signed on January 15 at the White House, and he will later pay a visit to Beijing for Phase Two discussions. The market response was muted to the message, suggesting it was already priced in.