The American stock market(s) that finished 2019 on a high note keep tapping new highs day in and day out this year.

The broader S&P 500   ended last year up 28.6%, its best year ever since 2013, and undoubtedly one of its best in more than twenty years. The Nasdaq composite index was up 35%, its best achievement in over six years. The small-cap Russel 2000 stocks surged 24%.

And what about Gold prices? The safe-haven asset which ordinarily goes down as the stock market goes up increased some 19%, and Silver metal rose more than 14% last year, and as the new year began, the precious metal prices keep advancing on - despite the pullback.

Indeed, that expectance demonstrated to be accurate when the Unites States assassinated Iranian general Soleimani and Gold surged to a 7-year high posting a $1,610 print. However, as tensions swiftly curtailed, the Gold price stabilized above $1,550, showing the muscle above the $1,500 Maginot mark.

So, I do maintain the Trade Selector Signal Gold projection for the possible downside risk to the Maginot Line of $1,500 mark. However, with strong odds, considering the geopolitical and socioeconomic Gold prices will move drastically toward the Next Outer Gold Rally of $1,672 and hit the $2,000 mark this year. 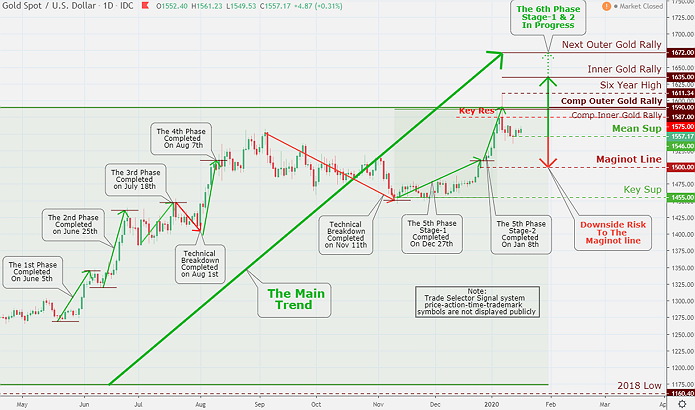 Technical Analysis and Outlook: Gold has settled at a relatively snug price range hovering above Mean Sup $1,546 after the failed January 8 high of $1,611. Exactly like in 2019, the Gold has so far succeeded in finding steady support relatively quickly following a spike above $1,600 level.

Let’s call it like it is – the American banking system is on the extensive life support line. Without vast Federal Reserve subsidies, there would be no massive banking profits, no functioning finance, no big management bonus rewards. Is this free-market capitalism? - I think not.

Many people keep saying that this subsidy game can go on for quite some time, they do forget it has been going on ever since 1971 when Nixon ended United States Dollar convertibility to Gold.

After that event, the market has been financed with debt borrowed and acquired at ever-falling interest rates. Since interest rates ended its decline, we have been in the ultimate endgame.

The Weekly market in review

Six of the eleven S&P 500 sectors ended with gains of at least 2.0% for the week, including a 3.8% increase in the defensive-oriented utility sector. The vital energy sector posted -1.1% and was the only index sector to finish with negative posting, as crude oil prices continued to falter.

Earnings news was positive, also. Financial companies, most prominently Morgan Stanley, got off the fourth quarter of last year with solid returns. However, traders and investors will have to remain patient until next week for leadership and guidance from other companies.

Strikingly, Alphabet Inc. matured to be the fourth American company to enter the $1 Tn market-cap valuation. However, general businesses about valuations were quashed last week, taking into consideration all the bits of good news, which by the way, helped the stocks ignore comparatively disappointing Christmas holiday sales numbers posted by Target Corporation and numerous transportation companies.

United States Treasuries were very little changed in yet another quiet trading week despite the significant rallies in the equities. The Two-year yield was unchanged, standing at 1.56%, and the Ten-year yield improved one BPS to finish at 1.84%.

The United States Dollar Index (DXY) increased by 0.3% to close at 97.64. On a relevant note, the Treasury Department announced it would begin issuing Twenty-year bonds in the first half of 2020.