The stock market set new intraday record highs on Tuesday's session, though only the DJI Average with +0.1% succeeded to close higher.

However, over the last couple of years, The S&P 500 index has surpassed the Dow and has reached levels that the Dow would never come close to attaining. 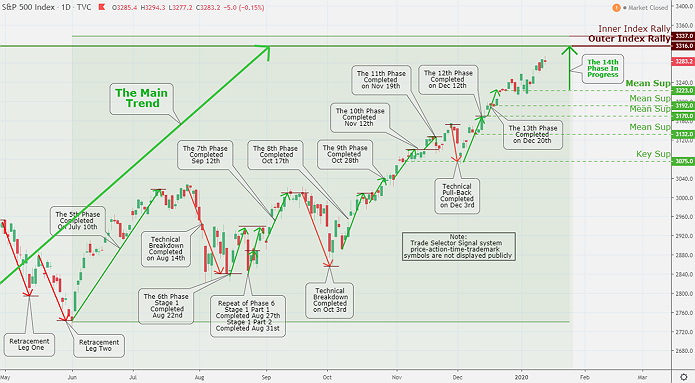 Technical Analysis and Outlook: The index entered another milestone on January 15. Currently, the S&P 500 is in the 14th Phase; however, after moderate weed out weak longs (Pullback), the market is moving on.

At the same time, Wells Fargo, with a negative 2.79 or -5.4%, missed the top and bottom estimations due to much higher expenses postings.

The results added to visible stock price changes; however, the price action in the more broad market was moderately tight-ranged among some bulls weariness.

At its session highs, the S&P 500 index was up merely 0.2%, and it was under the water only 0.3% after the Bloomberg published news that enduring U.S. tariffs on Chinese imports goods will remain for at least 10-months.

From the sector perspective, the S&P 500 information technology sector posted -0.6% along with the real estate sector print -0.5% was Tuesday's stragglers. In contrast, the health care sector with +0.5%) and utilities sector +0.3%) concluded with decent gains.

Apple sank -4.28 or -1.4%, which weighed heavily on the technology sector after Atlantic Equities downgraded company shares to Underweight from Neutral state.

Market selling was moderate, as there was never any suggestion that the United States would remove tariffs with the inking a Phase One agreement.

Never the less the news may have been a good reason to sell a market that is in an overbought zone on an intermediate-term basis, despite the bulls continued to be a resilient crowd.

In other important news, Boston Scientific took a hit with -2.81 or -6.2% on the announced downside revenue direction. A current study showed that Walt Disney's gain of +1.32 or +0.9% streaming app might have been downloaded a lot more than forty million times. Visa posted +0.72 or +0.4% on the news that agreed to buy Plaid for a $5.3 billion deal.

United States Treasuries ended on the quiet but an inherently higher note. The Two-year yield was unchanged for the session posting a 1.58%, and the Ten-year yield dwindled three basis points to close at 1.82%. The United States Dollar Index (DXY) ended with +0.012 or +0.01%. West Texas Intermediate (WTI) improved $0.07 or 0.012%.