The S&P 500 market sank as much as 0.7% yesterday after Apple Inc. dropped 5.95 or -1.8%. The company provided a revenue caution due to the coronavirus spread in China. The stocks resiliently cut their losses through the afternoon, leaving the broad S&P 500 index down 0.3% for the day.

The heavy-tech Nasdaq Composite index with +0.02% gain squeeze out a new closing record, while the DJI Average was posting with a -0.6% and small-cap Russell 2000 index -0.2% however, ended on the lower note.

Apple clearly stated to the market that it does not expect to match its revenue guidance for the first quarter as a consequence of the virus holding its supply chain as well as affecting consumer market demand in China.

The news, however, did not come as a big shock given comparable warnings signals previously announced by many companies. Although the traders and investors presumably saw the situation as brief and China-specific.

The resulting deterioration in United States Treasury yields undercut the notable financials sector with -0.9% loss, while it helped the utilities sector to post a +0.8% respectable gain.

Amazon.com, Inc. posted +20.80, or +1.0% increase, and Microsoft Inc. posted +1.88, or +1.0% gain: which have a combined market capitalization of approximately $2.5 trillion, eased the vulnerability of Apple. Both companies extended their annual gains to 16.6% and 18.7%, respectively, while Apple stock trimmed its yearly increase to 8.6%.

The rise of the United States dollar and equity market are derived from mistakes made by all international central banks, which will be short and brief, as the comparative advantage will succumb as the Federal Reserve first ensues and then takes the lead in creating more significant mistakes.

In contrast, the yellow metal will rise in a hurry. This present monetary policy is a formula for a colossal failure. Sooner than later, the $1,600 gold price will look very cheap!

Gold Technical Analysis and Outlook: As projected initially on January 4 and then February 1 Gold chart analysis, the 6th phase stage 1 and 2 movements to Inner Gold Rally $1,635 and Outer Gold Rally $1,672 respectively are in progress. 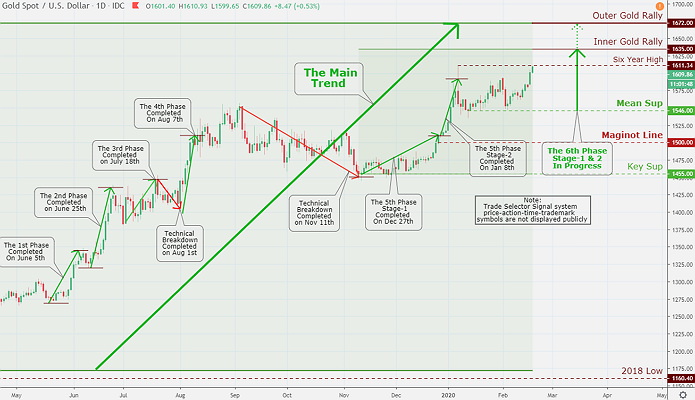