The U.S. Dollar Index (DXY) and the effect of Fed cut interest rates. While the stock market tends to preserve stabilization after cuts in the federal fund's interest rate, the foreign exchange market responds differently to those rate cuts.

The Event Study U.S. Dollar Index Spot chart below presents the average pattern of the DXY index in the 140 days before and after the rate cuts in the federal fund's rate. The chart pattern is measured as an aggregate of the past 30 years (46 events, 1989 to 2019), which covers collectively forty-six rate cuts. 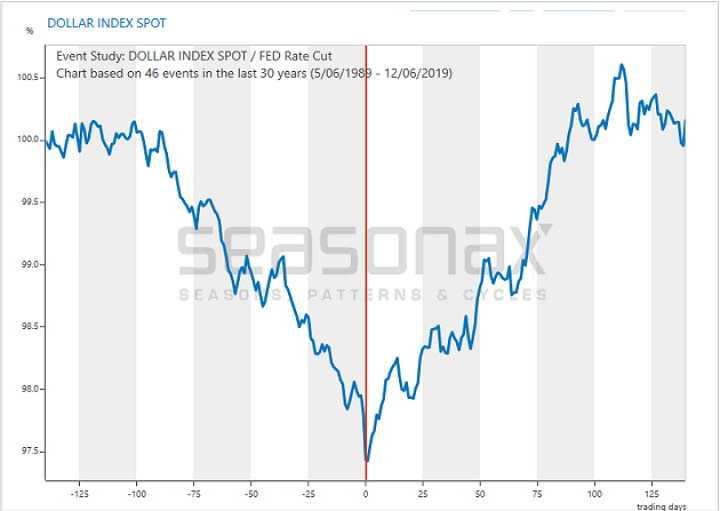 As one can see right away, on average, the dollar Index faded in the months commencing up to interest rate cuts. Nonetheless, the trend generally changed precisely on the very day the interest rate cut was carried out. As the chart demonstrates, after that, the dollar index managed to appreciate for many months to come.

What causes the DXY to influence exchange rates to act so strangely?

Many people are assuming that the DXY index would weaken in harmony with the federal fund's interest rate: After all, investment in US Dollar-denominated fixed-rate investment vehicles becomes much less attractive. The fact remains that the dollar index typically becomes much more robust following a rate cut.

Let see what the basis for the U.S. Dollar's strange behavior is. Interest rate cuts are relatively straightforward to prognosticate. Countless investors and traders already are positioned respectively to the cut event and will tend to close out their trade positions once the rate cuts are implemented: "sell the rumor, buy the news," as the motto goes

Necessitate to your advantage the Federal Reserve predictability

There are unquestionably many other viable interpretations. For instance, interest rate cuts are very often linked to crisis situations. In crisis situations, demand for U.S. Dollars usually increases, either due to the necessity to repay Dollar-denominated debt or simply because the U.S. Dollar is granted reserve currency status. Many economic and geopolitical factors will play a part, as well.

Contradictory to the general explanation we prefer, that this action stewards a standard "sell the rumor, buy the news" moto, these various approaches will not explain why the trend shifts coinciding with interest rate cuts. The logic cited above nonetheless may very much play a part as added drivers.

It's, therefore, reasonable action to take advantage of the Federal Reserve's predictability in the meaning of a contrarian trading strategy in the DXY index. But, interest rate cuts only happen infrequently. As an astute investor and trader, one needs more facts.

Luckily, vast many more actions and cyclical drivers influencing the market trends. One can easily find out about them with the aid of the Seasonax apps. That way, one will reach additional information and useful insights!

The DXY Index proceeding upwards towards Inner Index Rally $97.60 and Mean Res $67.65. The bullish sentiment developed/confirmed on July 5. Currently, the index experiencing steady to higher due to Mean Sup $96.70. The next stage for resistance comes from Key Res $98.15 and completed Outer Index Rally $98.25. The bearish reversal sentiment might take the dollar index back to strategic  Mean Support $96.70.

With all this uncertainty in the currency markets, that is why Bitcoin and Gold prices might be an early signal of the rate at which fiat currencies will lose its purchasing power.

If the leading countries via their central banks fizzle to preserve their currencies, then Gold and Bitcoin options to fiat money will have only now begun to climb higher.