How do rising interest rates affect stocks? You have probably seen stories published by the mainstream media regarding increasing rates hurt the stock market. 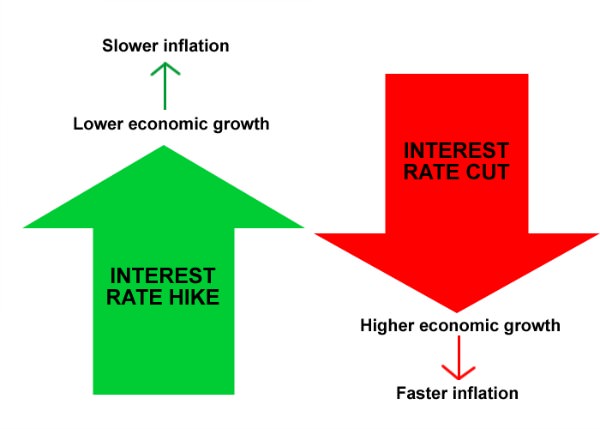 This topic can be confusing because we live in a world that relies on a global economy. A majority of countries are currently seeing a lack of economic growth or a slight growth. The situation is so bad in European countries that some investors are purchasing bonds with negative yields. This decision makes sense for investors who believe that the market is going through a deflationary phase and that rates are likely to keep dropping in the near future.

The U.S. economy has not been growing for a while. The GDP is currently growing at a rate that is under 1%. Interest rates were hiked by another 25 basis points by the Federal Reserve in March. This is the third time that interest rate has gone up since the financial crisis.

Increasing interest rates is not a rational decision given the lack of growth and the stagnation of employment figures in the US. People are not spending more since there is no wage increase and no economic growth. Businesses are hiring new employees but only on a part-time basis and salaries are not going up. This situation is not ideal for the stock market.

There have been so many talking heads going on about the economic situation and about how the good news is bad and vice versa. The Fed had lowered interest rates when the economy was slow, and commentators announced that this was good news because lower rates would lead to people spending more.

They believed that lower rates would encourage people to borrow and spend. This never happened and the lower rates were bad news for senior citizens who saw the return on their savings decrease. As a result, a lot of pension plans are underfunded and won't be sufficient to allow people to retire comfortably due to the low yields.

Increasing interest rates are not bad for stocks. On the contrary. Historically speaking, the U.S. 10 year bond and the S&P 500 tend to move similarly. We are in a situation with a fake economy growth, which should result in better performances for businesses and higher stock prices. And,  with shares becoming more valuable, many investors will unleash of their bonds, so they can use this money to invest in stocks instead.

However, the yields and the S&P 500 have been moving in opposite directions lately. European Central Banks and the Japanese Central Bank have launched a massive QE, which explains this phenomenon. Bond buying has been going up due to the actions of these banks and rates have been decreasing in these countries. This is why bonds yields have been negative in some European countries.

As a result, European, Japanese, Chinese and other investors have been motivated to invest in other markets, including the U.S. market. More foreign investors have been purchasing U.S. bonds because the bonds available in their countries have a negative or low yield. Some money was also invested in U.S. stocks and real estate.

The European and Japanese Central Banks initially pushed lower yields, and the U.S. Central Bank had to put an end to the QE bond-buying program. The lower yields associated with U.S. bonds and higher U.S. stock prices can be explained by the actions of foreign banks and investors.

Recent investments in bonds with negative interest rates yields add up to $13 trillion on a global scale. More people got rid of their global bonds and invested in the U.S. equity markets due to the way the mainstream media is presenting economic news. Inflation has been increasing, and stocks and yields are going up while bonds are decreasing.

It is likely that equities will briefly go down since the next rate hike announced by the Fed for June will be painted in a negative light by the talking heads. Prices should go up again after a short while and should bounce back higher than before.