Why Bitcoin market is a beautiful thing?. Is it because of potential as speculation? Is it because the government is working on to co-opt it - how this is going to end.

Our initial hesitation with the Bitcoin market was that any underlying asset didn't back the coin. It is private fiat money. It is very much like the U.S. Dollar, the Venezuelan Bolivar., or any of the many other currencies in the world today.

It is a free money concept. Unlike nation currencies, though, its approval is not enforced by states laws. However, on the other hand, its supply quantity is limited (21 Million). Would this be adequate to get a vast number of people to accept it as money?

Many are stating that crypto coin has no value. It is fiat money, although it has much more practical value than many other currencies.

A legitimate currency has to be a dependable medium of exchange and a vast store of value. Bitcoin's weakness is that it is very volatile. Yes, it is delightful to observe once's gains to double in value over several weeks.

Consequently, as more people embrace the coin, the Bitcoin market should stabilize, although the crypto-coin has already progressed from being rampant speculation to a helpful monetary instrument. We believe it will keep improving at a rapid pace.

The Bitcoin market has five characteristics of sound money. Good money needs to be #1 convenient, #2 divisible, #3 durable, #4 consistent, and have #5 usage value in and of itself. Aristotle understood that Gold and Silver precious metals were best fitted for application as money. So, how does the Bitcoin market compare applying these five criteria?

1. Convenience: Certainly, as long as one has a smartphone, the coin is very convenient. Though one's smartphone, or whatever, might not always be in your possession. The counterparty must also have one. And it is not very convenient if someone does not understand or trust the crypto. Currently, there are probably 98% of humanity in this category.

2. Divisibility: Bitcoin cryptocurrency is an exceptionally divisible asset. Much better than the precious physical metals, in fact - although the precious metals can be accounted in tiny portions as well.

3. Durability: Bitcoin and many other cryptos are unquestionably durable. Unless we have a significant EMP (Electro Magnetic Pulse) or a major solar flare that wipes out all the computer networks, Bitcoin is not as durable as the precious metals; however, they are capable, barring a real breakdown of human civilization.

4. Consistency: Definitely - Every Bitcoin token is precisely like another one. It is at most concise as .999 fine Gold.

The apparent predicaments with the Bitcoin market are the fifth item: Does it have application value in itself, so one will not get stuck holding the bag?

If one has a million U.S. Dollars, and nobody trusts and accepts them, they have no application in and of themselves. They are merely unsecured liabilities of an insolvent government akin to holding a million Venezuelan Bolivar.

Their issuing parties can very quickly destroy fiat money. In essence, They are like flaming matches. They have half-lives, just like contaminated radioactive particles.

Bitcoin definitely is fiat money like the U.S. Dollar or the Bolivar. However, it is furthermore an excellent money transfer device. One can move money globally, or to another private individual, instantly and privately (secretly).

Better still, one can arrange coin movement outside of the traditional banking system, which is by the way increasingly valuable. If one adopts Bitcoin token, one does not need a bank to store one's funds.

Cryptos, such as Bitcoins, was the first, and for the most apparent reasons, pioneers of blockchain technology. Hopefully, amongst other devices,  Bitcoin and blockchain technology are going to kill the SWIFT transfer system, the controlled vehicle utilized by Wall Street financial institutions for transferring monies from one bank to another.

Thus, this is one high use-value (fifth point) of Bitcoin currency. It enables one to transfer something that is trusted as money out of reach of the current rigged banking system, privately, as well as outside of government-issued fiat currencies.

Bitcoin market and other cryptos are well on the way to being trusted as the real money. We believe it will succeed. Keep in mind; money is merely a medium of exchange as well as a vehicle of a store of value. Virtually anything can be adopted as money. Some things are much better than others.

Bitcoin cryptocurrency is technological innovation. There most likely will be Bitcoin crypto V2.0 and V3.0, not to mention so many others, even much more, superior crypto coins. Thus, the burning question is: What will the current Bitcoin crypto token be worth? There is an intellect expression "High tech, big wreck" how true.

The Bitcoin chart of the day 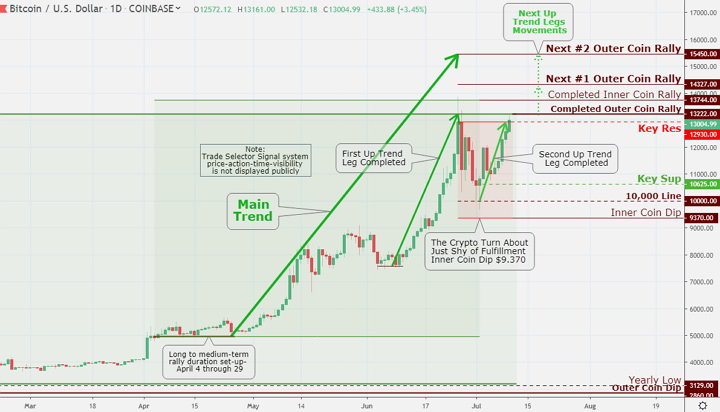