Value Of Money And The Objective Exchange Of It

The value of money's purchasing power is, in a more general sense, considered its real exchange worth. "Exchange value," in its self, requires no further explanation. "Objective" in this context, however, means unquestioned, taken for granted, or assumed.

Money is the anchor of all transactions and is more distinctive than the subjective cost placed on goods. As money users, it's easier for us to assume that money has no price changes, so that pricing subjectivity is reflected in the services or goods we are exchanging for it.

When rendering financial accounts, this very idea carries through, and the same applies to law too. However, most of us are generally conscious of the fact that over time, the value of money is not anywhere near being a constant objective. This, therefore, raises the question – on what grounds is our value of money based on?

Logically speaking, we only understand money's value by referring to our recent experience of its worth, and incrementally back in time, so that we can judge its unassailability. This is why a resident of Switzerland is less likely to appreciate the worthiness of his francs compared to an Argentinian of his pesos.

The Real Value of Money

But to understand the real value of money, you will have to assess its worth before it became money; that is why people all over the world know that gold's value is rooted in its various uses considering its physical attributes. Digital and paper money, on the other hand, have no other use-value.

To become more credible, today's longer-lived government currencies based their integrity on silver or gold, and were, at one time, exchangeable into either one of these monetary metals. That's no longer the case though; something that, theoretically speaking, leaves currencies open to an ever-present risk of losing their soundness as money.

Present day macro economic establishments persuade us to dismiss this concern, and anyone who questions the soundness of fiat currencies like money is considered a maverick or nuts. This isn't a tolerable argument of the regression theorem that's described in the above paragraphs. For an economist seeking the truth, it is your duty to make sure that you do not avoid or duck this rather important issue.

There isn't anyone who has managed to come up with a viable alternative explanation of how money is valued on this regressive basis since not many present-day economists fully understand the objective/subjective relationship in pricing goods using monetary units, and also because the consequences undermine the monetary policy thrust. This is openly evident in the General Theory of Employment, Interest, and Money by Keynes, which still serves as modern day's vade mecum in most of the economics world.

The implications brought about by the lack of sound price theory are quite remarkable. Not understanding the relation between goods and money, monetary policy errors are inevitable. As these errors become more evident, the personal freedoms we get to enjoy between us, like trading goods at prices that have been mutually agreed upon, become constrained through progressively counterproductive and distortive by government interventions.

The result, increased economic suppression as demonstrated when the effects of the Soviet repression eventually became evident after the Union Soviet Socialist Republic's command economy collapsed.

If total credit and money value in any economy remain constant and assuming that improved technology, manufacturing techniques and price benefits of competition are all put aside, the general price level will remain constant if the general preference for holding cash relative to goods remains constant too!

Ever since the last financial meltdown, there's been a tremendous expansion in the amounts of almost all currencies. The example chart below demonstrates the growth of fiat US Dollars since 1960 that had been much greater than the rate of expansion before the financial crisis, shown with the dotted line. 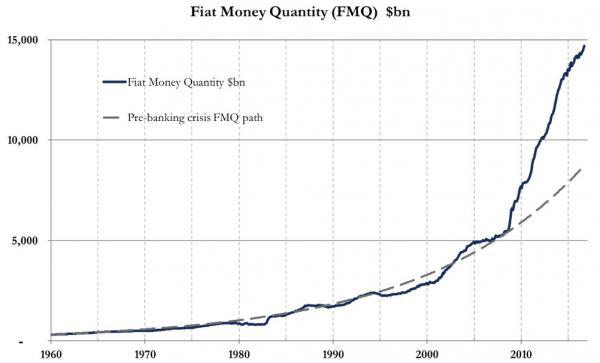