Taper tantrum and clarity to its debate

Taper tantrum tweets flood the electronic universe nowadays. It's essential to pay attention to what's not being "tweeted," like Uncle Sam's interest expense on his national bar tab.

The whole financial world is waiting to determine if Fed will reduce (Use taper tantrum) and its Quantitative Easing (i.e., money printing) program, sending bonds and stocks! to the floor, and interest rates towards the sky. in essence, they have ignored basic arithmetic and fundamental charting skills.

Notwithstanding, we specifically refer to the below chart, which represents the actual interest expense for the debt bar-tab of a now fully debt-intoxicated Uncle Sam. 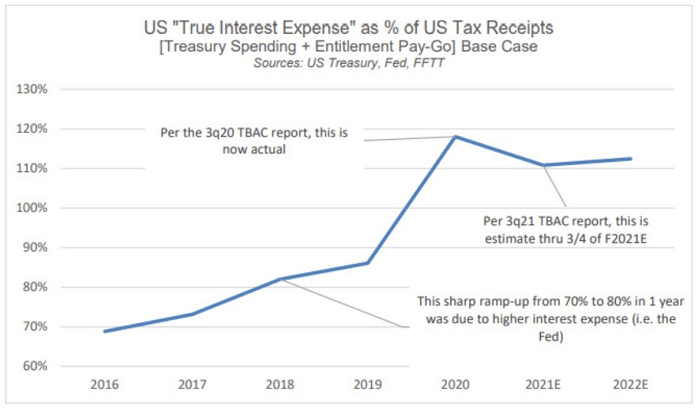 With central-bank "accommodated" asset bubbles (from stocks to real estate to art) now at historically unprecedented levels, tax receipts flowing into the U.S. coffers from the ever-growing millionaire-to-billionaire class have been rising.

While this may sound great for Uncle Sam, it is not. The fact is that, despite all those tax receipts for capital gains, the interest expense in D.C. (read: District of Corruption) "bar tab" is now 111%. This means that even tax receipts are not enough to pay interest on United States debt obligations.

The entanglements for the future are pretty clear given the harsh but often ignored reality of United States Debt.

Unless stated otherwise, a taper would add nasty helicopters fuel to the debt fire already raging in the Dis-United States of America.

Due to the risks of such a taper tantrum, it will not happen. This is because it cannot occur. This means that there will be more money printing, more negative actual rates, weaker U.S.Dollar, and higher precious metal prices, amidst others.

But what if the Fed gets a taper tantrum

If the Fed decides to become hawkish in response to a debt forest fire and reduce its Quantitative Easing support, Treasuries could sell off rapidly, rates will rise, and markets will tank. The U.S.Dollar will also surge, which is bad news for Gold, Bitcoin, and just about any other currency.

The Fed has many liquidity tricks up its sleeve, so the taper tantrum debate is not a debate at all. The Fed also has ugly bonds to purchase, in addition to liquidity tricks.

I have often stated it: embarrassing and unsustainable, and debt levels are the most significant problem today. This is not a virus pandemic narrative that is out of proportion to its scientific truths.

COVID was a convenient and timely excuse to blame global debt ($300T), or United States public credit ($28.5T), on flu, rather than the sordid history and grotesque mismanagement by politicos and bankers. This was long before the first news out of Wuhan.

Additionally, COVID monetary policy and fiscal measures became a pretext for a second (hidden) market bailout that was more extensive in scope and optics than the post-Lehman bailouts of banks otherwise known as Too Big To Fail.

The disguise and branding of a humanitarian crisis enabled a market-saving liquidity rescue (Bailout 2.0) to an otherwise Dead-on–Arrival bond exchange in late 2019.

Dear reader, if this seems too controversial to you, please follow the U.S. Treasury market and not my confused nouns or adjectives, not to mention my lack of scientific and medical qualifications.

Naked taper tantrum: "What if"

Nevertheless, and this is big, what if the Fed gang was stupid enough to taper Quantitative Easing with no back-door liquidity coming from foreign Swap lifelines or the repo scheme?

Once again, U.S. Treasuries could get even more unpleasant, sink in price, send rates higher and Gold lower, and causing sharp sell-offs in risk assets, such as corporate stocks and bonds. I don't believe this will happen because central bankers, as desperate as they may be, are as predictable as can be.

That is, they know that such a naked taper tantrum (i.e., a taper without a back door repo or swap-induced liquidity) would cause interest rates to spike, and hence Uncle Sam's bar-tab to default.

As the Fed's Vice Chair intimated a year ago, U.S. Treasuries (Uncle Sam's bar tab) are simply too big to fail. This means we can expect more liquidity (Quantitative Easing or repo/swap) and hence more, not less, inflation.

The Fed is stuck in a self-inflicted dilemma–between letting inflation rip to somewhat service America's bar tab or watching markets sink to the bottom in real-time. So, which option do you think they will execute?