It's was a busy morning on Tuesday, and for a change stock market didn't have as much to do with U.S. - China trade war news as it did with earnings reports. In any case, there are no escaping trade war headlines.

Last, of all, it leaves us to gape if the third-quarter earnings results will weigh that much to the stock market. To be assured, the market players have observed enough reporting throughout the years to recognize that the fourth-quarter growth rate is prone to be 3-4% points more favorable than the expected growth rate before the inception of the reporting season.

That will not get the third-quarter growth rate back to be positive; however, it would hold it close to a flat rate similar to the first as well as the second quarter, both of which were praised for being much better than anticipated - however, they were just little better than the downwards revision.

This reporting season, nevertheless, is a very significant load factor for the market, as many companies will be presenting their direction for the final fourth quarter, furthermore, in some cases, giving glimpses of their 2020 year outlook.

We all can expect to overhear ongoing trade and tariff skepticism a lot in the rendering of earnings expectations. How the stock market responds to that could eventually boil down to the signs it receives from the Trump Administration on trade concerns, this isn't just with China it is with the European Union as well, also to what the economic numbers releases are unveiling regarding the state of the American consumer.

Most of yesterday's advancement arose in early trading. The S&P 500 index started just 0.3% higher; however, it soon accelerated to a session high levels - as 'Phase 8' move was materializing as projected by Trade Selector Signal (Act surprised)

The broad benchmark index traded nearby the $3000 level for most of the rest of the session, helped by gains in nine of its eleven stock market sectors. The health-care industry sector with the print of +1.8% provided the direction, followed by the communication services market sector showing +1.6%, and financials sector posting +1.3%. The utilities with -0.3% and the consumer staples posting -0.4% sectors closed the trading session lower. 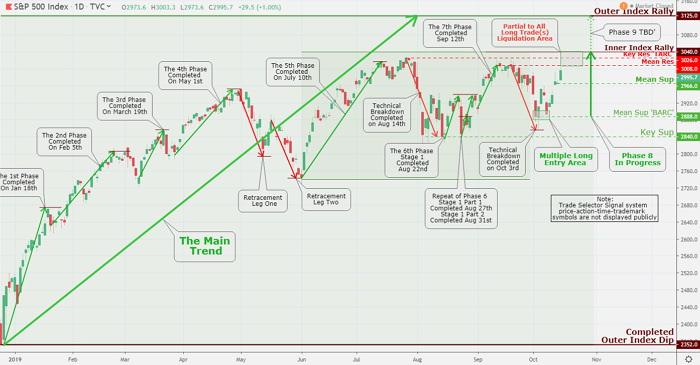 The moderately weak Mean Res $3008 is a modest barrier to cause the pause of the Index rise. The Key Res $3016 and awaited Inner Index Rally $3040 are next in line to be fulfilled. Meantime pullback to Mean Sup marked at $2966 might be a temporary setback.