The U.S. stock market faced a volatile beginning of the week, yet a robust second half boosted the main averages to secure gains. The primary indices closed a rough trading week on a higher pitch. The DJI Average on Friday advanced 320 points or 1.2% to finish the week with 243 points or 0.9% (YTD 15%).

The broader S&P 500 index index gained 32 points or 1.1% to end the week higher by 18 points 0.6% (YTD 18.5%). While seven out of eleven sectors concluded the week with respectable gains, climbing between 0.8% posted by the communication services sector and 1.9% print by the materials sector.

On the downside, there were three significant sectors: the utility sector, which got hammered by -1.4%, consumer staples posted -0.9%, and countercyclical real estate sector ended with -0.6%. The U.S. Treasury interest yields rose amid an advancement in risk level tolerance.

One of the stock market leaders, Apple Inc. (AAPL) Surged 3.9% to a new record high, encouraged by news reports about the risen production of electronic components for the company's latest iPhone 11 model. The gas and power company provider PG&E (P) suffered more than a 25.0% drop for the week on an adverse court ruling. 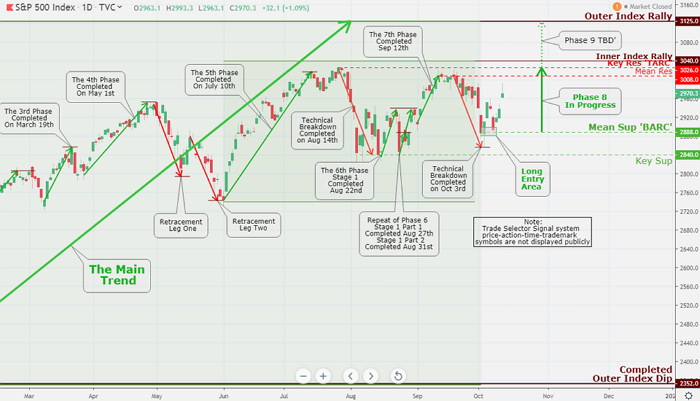 S&P 500 market bearish sentiment has been reversed since October 8, oversold conditions; however, more bullish conditions are in development with the current market trend reigniting Phase 8 move. The index upside outcome is in the cards marked at weak Mean Res $3008, Mean Res $3026, and Inner Index Rally $3040, respectively. The downside pathway of most limited support lies with Mean Sup $2888.

The Asian stock market across the region climbed mostly higher throughout Friday's trading session: China, Hong Kong, Japan, South Korea, India, and Australia. While the stock market movement was most likely driven by United States-China trade discussions - There was other news that affected the market.

International firms in China have a definitive clearer picture of whole ownership of financial services companies. By the next year, foreign businesses can apply for the complete control of inland ventures. This will unquestionably help outside investment movement into the country as China opens its doors.

India, the 'world's largest importer of culinary oils products, is considering increase restrictions on imports of various products from Malaysia, including palm oil stuff - In response to Malaysian leader slamming New Delhi government for its activities in Kashmir region.

The significant Eurozone stock market(s) also registered strong movements to the upside on Friday's session. The German DAX 30 Index spiked by 2.9%; the French CAC 40 Index climbed up by 1.7% while the United Kingdom's FTSE 100 Index propelled by 0.8 percent.

Further, United Kingdom's Brexit affairs were softened somewhat following Friday's meeting between British PM Boris Johnson and his counterpart Prime Minister of Ireland Leo Varadker, with both politicians remarking that they could possibly accompany a way to a Brexit deal - The British Pound charged over 3% in the last couple of days over the news. 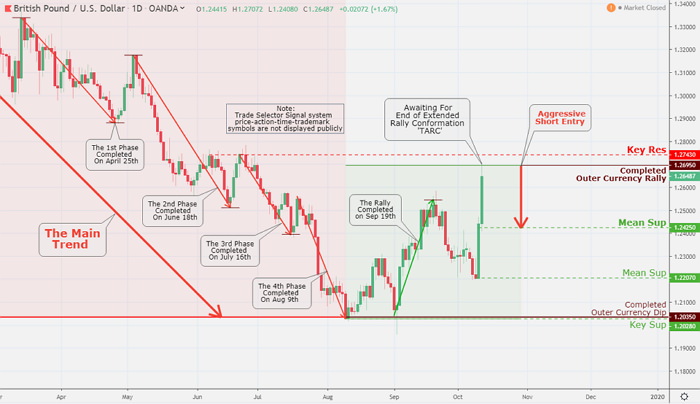 The British Pound Market (Click the Image to Enlarge)

The British Pound moved to a new high over two and a half months; however, it stalled after the Outer Currency Rally $1.2695 completion. If the price stays at and below the present Key Res $1.2743 with the 'TARC' symbol developed within a couple of trading sessions - Then the current market trend move is over, and the bears will take over.

As the United States Treasury interest yield accelerated sharply for a second straight session, the United States Dollar was off once again. The DXY Index - a measurement of the Dollar to major six world currencies fell 0.4% to close 98.33 or 0.4%.

West Texas Intermediate (WTI) crude oil joined other risky assets in the rally as the Gold and sold off. Crude oil moved $0.98 higher to close at $54.93 per barrel. Gold declined $5 to finish the day at $1,489 per ounce. 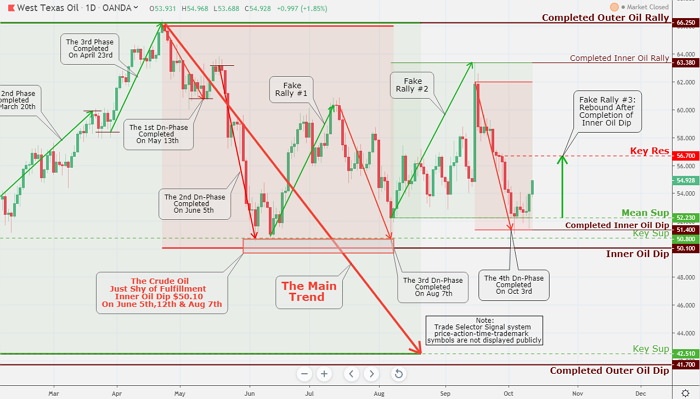 The WTI Crude Oil Market (Click the Image to Enlarge)

On Friday, we saw a small pullback among the leading crypto coins, while Bitcoin continues to trade somewhat apart from the rest of the crypto market. The currency remains relatively stable, and while it is holding up above significant support levels, similarly to its most prominent companions.

It is price action that makes a bullish upshot much more plausible concerning the entire crypto market segment. Investors and traders should nevertheless expect a retest of these supports in the coming days following the current consolidation phase ending. 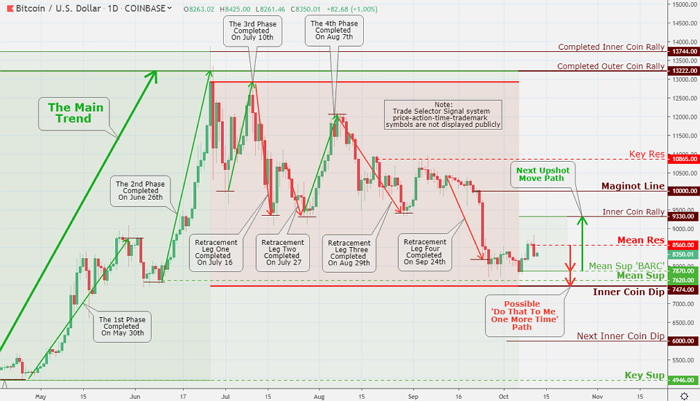 The Bitcoin is in an apparent consolidation phase, and a movement towards Mean Sup $7,620 and Inner Coin Dip $7,474 looks possible as the Trade Selector Signal ending confirmation symbolized with Mean Sup 'BARC' $7,870 is relatively weak. The initial resistance level is the weak Mean Res $8,560, lying just above the current price action.