Some clear thinking about Stagflation 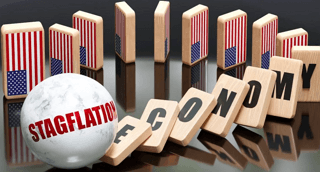 Authored by: Simon Black via SovereignMan

﻿Let’s not mince words: stagflation is here. Let’s also not overreact: the world is not coming to an end. And, like all things, there are both risks and rewards that will arise. First, what do we know?

Historically high inflation is obvious. Plus many major economies around the world are already sputtering.

Germany’s economy stagnated with 0% growth last quarter. China’s economy practically ground to a halt. Economies in the UK and Hong Kong contracted slightly. And the US economy has already contracted for two consecutive quarters.

Now, in nearly every other country on the planet, when your economy shrinks for two consecutive quarters, they call that a recession.

But not in the Land of the Free.

In America, a recession is defined as whatever a special government committee within the National Bureau of Economic Research wants it to be.

I’m serious. The agency’s own website states that “the designation of a recession is the province of a committee of experts.”

Wonderful. More ‘experts’ who don’t have an iota of common sense among them. And this is why, at least in the United States, the government has thus far refused to call this a recession. In fact they insist we are NOT in a recession.

Definitions and “province” aside, however, a recession is more like what US Supreme Court Justice Potter Stewart said of obscenity in a famous 1964 case: “I know it when I see it.”

Worried about the way things are going in your country?

And normal people know recession when they see it. Recession is when people and businesses feel less prosperous. We start cutting back and stressing more about money. We dream less about the future and worry more about the present.

But even if the economy isn’t in recession yet, it seems fairly clear that one is coming. There’s already a mountain of evidence from corporate earnings reports showing steep declines in both consumer spending and business investment.

Those wonderfully infallible “experts” have certainly done a bang-up job steering us into this slowdown.

The Federal Reserve in particular slashed interest rates to zero and held them there for most of the last 14 years. They conjured trillions of dollars out of thin air, they grew their own balance sheet by a factor of TEN… and then kept insisting that there would never be any consequences EVER from such an absurd course of action.

Then, when inflation finally did take hold, they denied it at first. Then they called it transitory. Then they finally promised they would ‘do something’ about inflation… eventually.

Later on they even admitted to being totally ignorant, saying “we now understand better how little we understand about inflation.” (It seems like the first nine words should apply to all government experts.)

Now, at last, the Fed gave us the courtesy of speaking plainly and bluntly on Friday morning when the Chairman gave a terse warning about the US economy.

He stated that “the US economy is clearly slowing down” and that fixing inflation would likely “require a sustained period of below-trend growth” and “softening of labor market conditions.”

In other words, that means the economy will be sluggish, and a lot of people will lose their jobs. Sounds like a recession to me, even if the bureaucrats don’t want to admit it.

The real conundrum, however, is that inducing this economic pain won’t necessarily fix the inflation problem.

Any high school economics student knows about the Law of Supply and Demand. And it very easily explains why the world has so much inflation.

Policymakers artificially created soaring demand during the COVID pandemic when they conjured trillions of dollars out of thin air and gave everybody free money.

All the unemployment benefits, being paid to stay home, the PPP ‘loans’, etc. flooded the economy with cash. People have been spending it. And that created a surge in demand for goods and services– everything from microchips to rentals on Airbnb.

Big increases in demand are fine, and don’t necessarily cause price increases… as long as the supply of goods and services is able to keep up.

But it didn’t. Supply collapsed– again, primarily because of governments’ COVID response. With everyone being forced to stay at home, there were obviously far fewer goods and services being produced.

And those effects have lingered. Businesses everywhere are struggling to find enough workers. And labor shortages in critical vocations like trade and transportation have caused major supply chain bottlenecks.

(Obviously none of these issues existed prior to the public health dictators’ takeover of the global economy.)

On top of the pandemic-related supply challenges, however, businesses and workers have also had to contend with an avalanche of new rules and regulations that make it more difficult to produce.

Many of these debilitating rules single out oil and gas producers, which contributes to an ongoing energy crisis. And higher energy prices also make it more difficult to produce goods and services. So it’s quite a vicious circle.

All of this is to say that the Federal Reserve can raise interest rates and cause a recession to cool off demand.

But a decrease in demand isn’t enough. Inflation can only be tamed if there is a substantial increase in the supply of goods and services. And the Fed can’t really influence that.

Yet unless this happens, i.e. workers and businesses are once again free to produce, all we’ll be left with is stagflation: a recession combined with stubborn inflation that won’t go back to normal.

Now let’s go back to the beginning: do not overreact. The world is not coming to an end. ‘Stagflation’ doesn’t mean 20% inflation and 20% unemployment.

In fact it’s much more likely that inflation falls to 5%, unemployment rises to 8%… and the Fed will consider that a job well done.

The constraints on supply being caused by political stupidity and geopolitical tension are, to borrow from the Fed, “transitory”.

While I generally place little hope in politicians, historically speaking, opposition candidates tend to win elections during economic stagnation. And that pattern should lead to more responsible, pro-business governments.

Then there’s the matter of our burgeoning energy crisis, which is also holding back supply.

This, too, is temporary. In fact the world is on the cusp on a new energy Renaissance that has the potential to fuel growth and prosperity for decades to come.

This is a really important (and uplifting) trend to understand, and we’ll discuss it very soon.

Last, rising interest rates and stagflation will likely have an adverse impact on both housing and the stock market.

Interest rates are a major factor in these asset prices; and higher rates mean that housing and stock prices will fall.

During the stagflation of the 1970s, home prices were relatively flat after adjusting for inflation. And stocks lost about 50%. But that was the average performance for all assets.

With housing, specific locations did extremely well. Home prices in Houston and California, for example, boomed during the 1970s, vastly outpacing inflation.

There were also plenty of companies that did extremely well. John Deere stock more than doubled in price between 1972 and 1979 after adjusting for inflation, and it paid a solid dividend at the same time.

Commodities performed strongly during the 1970s. Agriculture and farmland did extremely well. Gold was the best performing asset of the decade.

And there were plenty of startups, including Apple and Microsoft, that got their start during the stagflation of the 1970s.

The bottom line here is that there’s no reason to panic, and plenty of reason to be fairly optimistic about the future (once you understand long-term energy trends).