The Role Of The NASDAQ In Today's Global Economy

The NASDAQ is the second largest stock exchange in the world (following the NYSE) in terms of total market cap *$6.8T), by its monthly trading volume ($1.2T) and how many listed companies it has (3,200). However, the NASDAQ is in first place in one key area: the market cap of the largest companies. Microsoft, Alphabet, and Apple all have caps of about $500B. 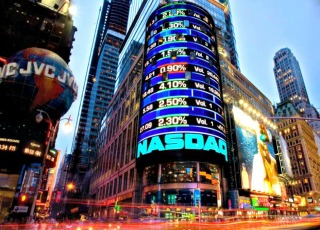 That is more than any of the companies that are listed on the NYSE. Each of those companies has a market cap that is comparable to some exchanges total market cap, like the Moscow Stock Exchange.

Also, if the caps of the five biggest companies are taken together, it would be sufficient to be one of the ten biggest stock exchanges in the world (even if all other companies had to leave).

The 'face' of the exchange are those young high-tech companies that are in fields like alternative energy, biotechnology and information technology. The following are some of the companies trading their stock on the exchange: Yandex, PayPal, Electronic Arts, Cisco, Mobile TeleSystems, Starbucks and Texas Instruments.

The NASDAQ by comparison to NYSE is a fairly young stock exchange. In 1971 it opened its doors as an alternative option to the NYSE that was more accessible, and that was for more "modest" shares that had been traded over-the-counter previously (which had been regulated by the National Association of Security Dealers, or NASD, which was an association made up of over-the-counter brokers).

Almost immediately after the exchange opened its doors, it started shooting for the top. It specifically looked to use information technology for simplifying the trading process and making it possible to make more deals in a certain amount of time that hadn't previously been possible.

The exchange has been able to develop a reputation for itself as being a high-tech exchange that is used by high-tech companies. During the 1990s is when its popularity grew the fastest. As the Internet emerged and the companies specializing it became more successful, it resulted in paradoxical consequences. Most people have heard of the dot-com bubble of 1999-2000 even if they don't know much about economics.

During the late 1990s, companies such as eBay.com, Pets.com, Amazon.com and others saw their shares increase in price by multiple orders of magnitude. The Exchange Composite index (which is proportionate to the total market cap for all companies listed) when over 5,000 points. At the time that was completely unheard of. However, it then dropped very quickly a short time later.

The dot-com bubble didn't just shake up the NASDAQ but the entire US economy. However, it is more clearly shown by the NASDAQ Composite graph for the entire market than the S&P 500 index.

Interestingly enough, a number of the companies that were responsible for the dot-come bubble (like Pets.com) shortly afterwards went bankrupt. However, some remained in business and even far exceed what their prior price records were (like Amazon.com). Amazon.com shares cost $5 in early 1998, and they cost $106 by late 1990.

However, they went down to $10 in late 2001 and now are over $700. The IT business ultimately continues to grow, and the exchange increased rapidly into the world's second place stock exchange, overtaking the Tokyo Stock Exchange (TSE) and London Stock Exchange (LSE).

Since the exchange has grown from being an over-the-counter stock market to become a more popular and respectable organization, its listing requirements have become also as strict as the NYSE. Currently, it only admits companies meeting very hand standards when it comes to a number of shareholders, market cap, and earnings.

The NASDAQ and OMX stock company merged in 2007. It included eight stock exchanges from Armenia and Northern Europe, with a $1.2T total market cap. The new group that resulted from the merger is comprised of nine exchanges that have a $8.0T total market cap. However, both the OMX and NASDAQ have retained a great deal of autonomy. Therefore each subsidiary deserves its own article. We are just discussing the NASDAQ here.

What Investors Need To Remember

A majority of stock brokers granting DMA to its clients (instead of a CFD) also provide access to the exchange as well.  All exchange-listed companies can be viewed at finance.google.com using the Stock Screener service (in the first box select 'United States', and in the second choose 'NASDAQ Stock Market'). You can see which of the companies are ranked first according to various criteria for the year.

Advanced Micro Devices (market cap of $5.8B and ticker symbol of AMD), the famous engineering company, came in second place with a 333% 52-week price increase. Both of these companies were established quite some time ago, and the current price increases they experienced were the result of recovering from internal crises that occurred over the course of many years.

The shares of other companies do not cost over $800. Sirius XM Holdings (market cap of $20B and ticker symbol SIRI) have the most widely-traded shares with a 55M average daily trading volume, along with Advanced Micro Devices (average of 35M shares a day) and Apple (average of 32M shares a day). Keep in mind that Apple's share are fairly expensive at $107, so there is an enormous daily turnover of $3.4B.

When you purchase the QQQ, you are purchasing a portfolio made up of the share fractions from the 100 largest companies. Over time these ETF prices change in the same way that the total market cap of companies change. Dividends are paid on the ETFs, although it is fairly low at around 1% a year.

The working hours of the exchange are the same ones that the NYSE holds: 9:30 to 16:00 EST. Typically online brokers take the same commissions on the NASDAQ that they do with the NYSE: about $1 minimum per deal and around $0.02 per share.