The S&P 500 market fell as much as 3% on the first trading day of the week due to various concerns. However, the benchmark index rebounded and ended the week's session with a 0.5% increase. The Dow Jones Industrial Average (+0.6%), Russell 2000 (+0.5%), and Nasdaq composite (+0.02%) all made their comebacks. Although, the Nasdaq performed poorly.

China's Evergrande was the scapegoat for its early weaknesses: reports suggested that the property developer was close to defaulting on its $300 plus million in debt. Secondary issues included infrastructure and the debt ceiling.

The unexpected market news fed into believing that anything (even something) would cause a market pullback. In this instance, it was fear of financial contagion. However, dip-buying was encouraged by the belief that worries were exaggerated. Fed Chair Powell thought so when he stated Evergrande's problems seemed to be unique to China.

Although the Fed's Wednesday policy announcement was less dovish than expected, it was still viewed as a source for market comfort. It was interpreted that the Fed's monetary policy will remain accommodative even if it begins to taper asset purchases, which could occur as soon as November.

Technically, the S&P 500's Mean Sup $4,385 and Buy Zone appeared to be an essential driver of buying interest, as shown in Weekly Daily Chart Analysis For September 13, this fundamental technical level, along with adjusted with a faster time frame, has been a great buying opportunity. It was therefore encouraging to see the benchmark index return to this level.

Thanks to some encouraging economic data, the Ten-year yield rose nine basis points to close at 1.466%. This included a four-week trend in initial and continuing claims that declined. Each August data, including new home sales, existing home sales, and housing starts, beat expectations. 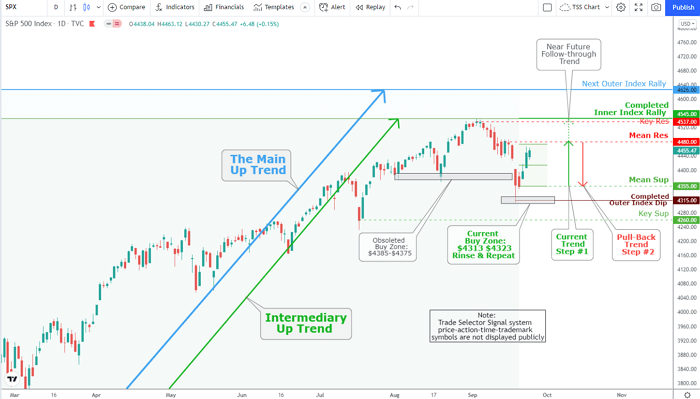 Our Outer Index Dip of $4,315 was completed on Monday. The Spooz is currently in an aggressive up-move to our Mean Res $4,480. The subsequent significant outcome is pull-back to retest Mean Sup $4,355 and inner time frame Mean Sup $4,313 (Not Shown).

Global equity market(s) fell for the second consecutive week after the word 'default' was used on both sides of the globe. China's Evergrande is the property and real-estate giant, while Uncle Sam in the U.S. is the one with the potential to knock his head against a debt ceiling.

China is not all roses. China's economic woes include a new COVID epidemic, credit market problems, weaker than anticipated economic data, and another round of regulatory tightening (this one at Macau casino operators who are some U.S. members). This has sunk Chinese and emerging markets and caused collateral damage to global equities. The sharpest decline in August Chinese economic data since early 2020 was evident.

Retail sales were at their lowest point since the beginning of last year, indicating a severe slump in consumption. However, investment and production also suffered, although less quickly than Evergrande's pile of debt. Its shares have fallen more than 80%, and its debt trades at ~25 to 30¢ on U.S. Dollar. Many fear that Evergrande's collapse could lead to China's Lehman moment, the one triggering the 2008 financial crisis in America.

There are many scenarios. A chaotic collapse into bankruptcy is the most likely scenario. However, the government can stop it. China's government doesn't mind rescuing private businesses (it seized Baoshang Bank 2019 and controlled HNA Group 2020). Still, authorities have tried to keep the credit market from becoming a moral hazard. An actual rescue is not the best option. It is impossible to guarantee smooth sailing without government intervention, as the 2015 currency devaluation jolted investors.

Another scenario is restructuring with partial bankruptcy. This involves liquidating assets and some debt being rolled forward. Although the scale is grander, there is precedent. Court-led restructurings are becoming more familiar, with over 700 of them completed in 2020. The Chinese high yield bond yields increased to an 18-month peak, while shares in other real estate companies plummeted.

To combat the spread of contagion, the central bank encouraged the economy by injecting more liquidity. Financial markets outside of China hadn't shown any signs of financial stress until Friday. Global markets trade lower as Evergrande is blamed for the weakness. The greater the chance of contagion, the longer the uncertainty lasts.

Silver fell to $22.11 on Friday before recovering to gain 6¢ to close at $22.39. While silver volume declined, gold volume on Comex increased slightly. The ratio of gold/silver fell from 79 Monday to 77.3 on Friday.

We warned of price volatility as higher interest rates are factored into financial markets. This is precisely what we believe to be occurring. On Wednesday, the Fed released an FOMC statement in which it adjusted its "transitory" stance on inflation to admit that it may persist for a bit longer than initially believed. Tapering was therefore proposed: "A moderation in asset purchases may soon become necessary."

Bullion banks should be concerned, which typically take the short side of precious metals paper market markets. Comex reported that 5 U.S. banks and 32 non-U.S. banks were net short 131,958 contracts on September 7, representing 410.4 tonnes of $23.16bn.

The LBMA has no figures. Based on the established relationships between these markets, they are in all probability to be short additional eight times. That's $208bn, or 3,694 tonnes in needs that have minimal physical liquidity.

Bullion banks may be hoping to profit from rising interest rates to encourage weak holders to sell paper and physical. However, this ignores that increasing inflation drives both gold and interest rates in the same direction. This is what any 1970s student will tell you.

The bad news is that there are no actual prices for gold or silver in the world. It is futile to follow investment recommendations made by MSM, which were all made in good faith.

A small group of people in London and New York determine the precious metal prices in the world. They decide each working day what the price of gold or silver will be. This daily decision does not have to do with the "Market" for these precious metals.

Today's precious metals markets are primarily designed to confuse the public. This "Confusion as a Goal" has enabled the U.S. Dollar, the world's reserve currency, to continue to exist as long as it has.

Profit in precious metals markets is only possible in one way: You buy at whatever price you want to purchase the metals for and then wait for this wealth preservation policy to fruition.

Cryptocurrency volatility will not go away. If you ever pondered timing your entrance into cryptocurrency space after volatility subsides, perhaps you will be unlikely to move a natch from the fence. The whipsawing attempt of the crypto world with boom-bust and hot-cool scenarios seems to be inevitable.

It results from the technological, economic, and social trends that are changing the industry every day. Catalytic volatility may be a key feature of how the crypto ecosystem has evolved up to now and will continue to evolve in the future.

The rival contender Ethereum (ETH) is currently trading under $3,000. The leading alternate coin has lost almost 19% in 24 hours and over 5% over seven days. ETH has seen a 70% increase in six months and a 725% increase in twelve months.

China's declaration of all virtual currency transactions "Illegal" sent all crypto prices tumbling on Friday. Chinese regulations are like that annoying mosquito buzzing in your room. Every time you close your eyes to enjoy a nice peaceful dream about hyperbitcoinization, it lands right in your ear.

And before we know it, we're sitting straight in our beds, telling ourselves we have done this a thousand times. In an instant, you remember every previous ear landing, and then we would fall asleep within a few minutes.

Well, on Friday, that mosquito landed in our ear again. The Chinese Central Bank wants to ban cryptocurrency transactions for companies and financial institutions. They shared a memo, and within minutes, the entire crypto market sat straight in their bed, and prices fell.

It's the same FUD (Fear, Uncertainty & Doubt) every couple of months. Fortunately, there is a silver lining. Announcements of new Chinese laws always make for a great dip. And we all know what dips are for, don't we!.