This discrepancy could be attributed to the market's struggle with the peak-growth narrative. This leads to slower growth rates, especially when you consider other negative factors. 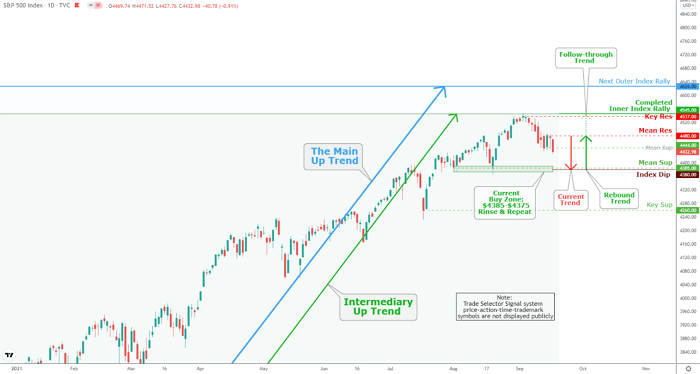 One good rebound day occurred this week, but sellers dominated the market. The closing S&P 500 index fell below its Mean Sup $4,444 at the close. The Spooz is currently in a downtrend. Forecasting a drop to Mean Sup $4,385: a strong buy providing ample opportunity for loading-a-boat for resurgence to retest Mean Res $4,480 and follow through to Key Res $4,537. The subsequent significant outcome is Outer Index Rally marked at $4,626 to follow.

There was also some selling interest in the Treasury market, regardless of whether this was due to good economic data, cash-raising efforts, or technical factors. The Ten-year yield rose three basis points to close at 1.37%.

Global equity market(s) slumped over the week. However, Japanese and Chinese equities managed to buck the trend despite tighter regulations applied to large internet companies like Tencent.

China's equities gained robustness on Chinese trade data despite the latest moves directed at the video game industry and include a temporary freeze in approvals for new online games.

There was also uncertainty over infrastructure and the debt ceiling. A few provinces were under lockdown by Covid, while reports talked about Evergrande, one of China’s largest property developers, defaulting on its debt. Hong Kong's Hang Seng Index rose by 1%.

The European Central Bank (ECB) unanimously decided to continue buying bonds at a "moderately slower pace." President Lagarde stressed that this is not tapering. Although the pace of purchases will slow, the total pledged amount remains at €1.85 Trillion. It is still scheduled to continue until at least March 2022.

Throughout the session, primary European market(s) moved to their downside. The French CAC 40 Index fell by 0.8%, while the FTSE 100 Index in the United Kingdom and the German DAX Index plunged by 0.9% & 1%, respectively

According to media reports, analysts attributed the sharp market selloff to several factors. These included the solid retail sales numbers and the ramp-up to next week’s Fed meeting. The metal's inability to gain a solid foothold above $1,800 and a stronger dollar.

Bitcoin has been moving upwards since Sept 14 by breaking out from a Mean Sup $44,530 accumulation channel and accelerated.

At that moment, the Bitcoin price is trading around weak resistance marked at $48,150 and is due to accelerate to our Mean Res $52,600 and Inner Coin Rally $54,550. However, BTC’s recovery at this level will face stiff resistance, indicating that bears will be very active at this higher tier prices.

On the upside, analysts remain bullish, as indicated on the August 9 chart and some other different fast-time charts that underline the bullish potential for Bitcoin.

Along with Bitcoin, Ether is also showing signs of accumulation. Could the top two cryptocurrencies rise to the occasion and their bullish projections, or will the surprise of the cryptocurrency market(s) move to the downside?. Stay tuned. 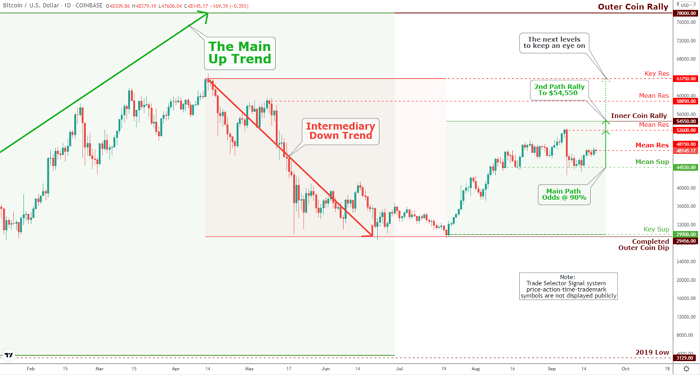