With 3.2% and 1.7% declines, consumer discretionary and energy sectors were the worst market performers. Due to a 15% drop in Tesla (TSLA), the stock was under pressure as Elon Musk began selling shares according to a Twitter poll which indicated that he would sell 10%.

However, five of the eleven S&P 500 market sectors closed higher. The impressive 2.5% increase in the materials sector is accompanied by no more than a 0.7% gain in all other sectors.

Profit-taking interest and a sharp increase in U.S. Treasury yields were the main factors behind the decline at the index level. Fed expectations for hawkish next Year's interest rates triggered this.

In particular, the Consumer Price Index (CPI) rose 0.9% and was up 6.2% year-over-year - the most considerable twelve-month growth since November 1990. Core CPI, which excludes energy and food, rose 0.6% and was 4.6% year-over-year.

According to the CME Fed Watch Tool, after market closure on Friday, the probability of a rate hike in June 2022 was 69.1% versus 50.9% last week. The second rate hike probability for the following November increased from 44.7% last week to 64.9%.

Traders and investors largely ignored a report from the University of Michigan that showed a sudden decline in U.S. consumer sentiment during November.

According to preliminary reports, the consumer sentiment index in November fell to 66.8 from 71.7 in October. Economists were surprised by the decrease, as they had expected it to rise to a forecast of 72.4.

The unexpected fall in consumer sentiment this month saw the index lowest level posting since November 2011 of 63.7.

According to economic news, the Euro zone's industrial production fell in September by less than expected. As crude oil prices fell, the pressure was felt in the Energy sector. The Financials sector also saw some weakness, with the yields on bonds in the Eurozone (and the U.K.) generally lower.

Stocks in Asia closed the week with the highest close. This is despite volatile markets that have been analyzing a variety of global economic data. These include persistently rising inflation pressures triggered by increases in U.S. consumer and Chinese producer prices.

Early Friday trading saw the gold market slip, reversing some of its substantial gains over the past few days. Gold was up $48 to $1865 for the week. Silver closed at $25.30, up $1.15 during the same period. The precious metals are among those who have benefited from investors coming to terms with the possibility that inflation may be more severe than they thought. 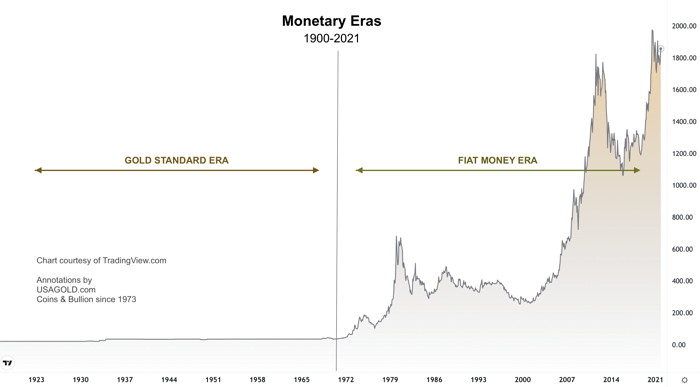 The chart above is crucial to understanding why gold continues to make sense as a long-term portfolio investment. The fiat money era was born in 1971 when the United States abolished the gold standard and allowed currencies to float against the U.S. Dollar freely. Today, we are still living in the fiat money era. The chart shows the performance of gold from the early 1900s through 1971, when gold supported the U.S. Dollar, and from 1971 until today when it didn't. Although gold has experienced ups and downs over the years, investors have been well served by building themselves on a portfolio for the gold standard.

This Sunday, two significant events will take place that can change Bitcoin forever: The first one is a given, the implementation of the Taproot update. This will increase privacy and decrease the file size of a transaction on the Bitcoin network.

Bitcoiners often call Bitcoin a hedge against inflation. Nothing illustrates that better than the chart below. With the 6.2% inflation rate in the U.S. for October posted, bitcoin rose to a new all-time high within seconds. Sure, correlation doesn't equate to causality, but it sure looks that way.

Stat of the week: When Bitcoin reaches block 709,632, Taproot will officially activate. After activation, all updated nodes and devices will make transactions using the updated protocol.

The update will, in essence, combine the Schnorr signature scheme with the Merkelized Alternative Script Tree (MAST). In addition, Taproot will bring about a new scripting language named Tapscript. So enjoy the weekend, grab some popcorn and take solace in the idea that bitcoin will continue to improve. Block after block.