The S&P 500 market climbed 7.3% this week to regain its strength from last week's 5.6% slip, as the likelihood of a divided Congress overweighed the event that no presidential victor was named by week's end. The heavy-tech loaded Nasdaq Composite surged 9.0%, the DJI Average rallied 6.9%, and the small-cap Russell 2000 mustered a 6.9% gain.

All sectors in the S&P 500 ended in positive territory, with ten sectors expanding between 2.8% clocked by utilities and 9.7% obtained by information technology. The vital energy sector rose by just 0.8%.

In the presidential reality show, the market seemed not to care who will be president as long as the status quo is maintained in Congress. Vest expectations were that the Senate would remain with the Republicans, and the House would remain with the Democrats. However, the Senate race may not be determined until January 5 since it seems that both Senate races in Georgia are going for second-round voting.

A much smaller or even prolonged stimulus agreement would disproportionately boost the mega-cap and growth market and beat down the cyclical stocks by the potential for a more delayed economic recovery.

In a nutshell, nonfarm payrolls rose by 638,000 in October. The unemployment percentage decreased to 6.9% from 7.9% in September, and the Institute of Supply Management (ISM) Manufacturing Purchasing Managers Index expedited to 59.3% in October from 55.4% posted in September.

Though Senate Majority Leader McConnell stated that a stimulus bundle should be passed by the end of this year, however, pushed for a "skinny" settlement due to the much better-than-expected employment report - act surprise here.

The Fed also manifested itself this week but was shadowed mainly by the election event. The Fed Funds interest rate was left fixed as broadly expected by the market. Fed Chairman Powell spoke about the prevailing pace of asset purchases that remained relevant for the present situation, though added that the voting committee considered more options if further accommodation will be needed.

All significant stock markets in Asia and Europe climbed higher, with a positive response to the American election showdown outweighing anxieties about Europe's latest lockdowns and the chance of a double-dip recession.

United Kingdom stocks underperformed as discussions with the EU (European Union) regarding post-Brexit trade repeatedly made little progress, notwithstanding indications early in the week that an agreement over the questionable fishing rights might emerge once again.

In just one day, the Bitcoin market rose by a whopping $1,475. On Friday, Bitcoin even reached a jaw-dropping value of $15,977. In this price chart below, you can see the crazed developments from the prevailing buy zone.

Many analysts were already predicting that a significant price movement would be possible during the presidential elections. However, none could foresee such a rapid ascent beside the TSS chart posted on October 19. 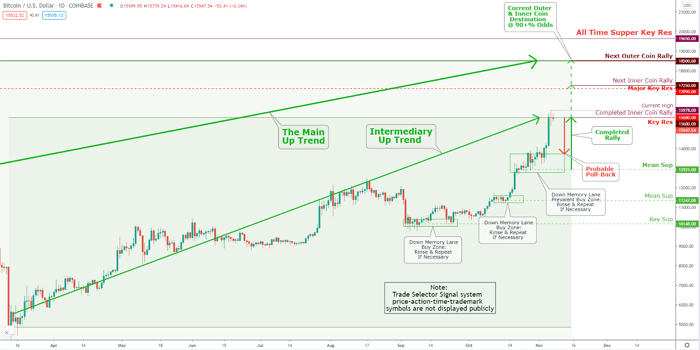