As Bitcoin gradually works its way back to $10,000 area, the defined above resistance roadblocks zone could be a sticking spot where resistance will prompt a healthy pullback to a price level where the previous supports are located.

As I have written before, it increasingly apparent that the market has no relationship with the actual world. It is almost like we are watching pretended movements or watching the wrong market charts.

However, as the market climbed higher out of March 23 selloff, buyers drove the S&P 500 index higher, giving us ample opportunities to buy/sell and keeping a low-risk scenario.

The most significant difference between then and now is that the current rally is pushing the S&P to its exhaustion. This time, the index fluctuating enough that even with the short rallies, the S&P is retracing far enough to allow us to capture a very profitable trades.

And whether the Fed has enough ammo to keep pushing the market higher in the next coming week(s) will hint whether this is more likely the kick-off of a distinct bull market, or merely a bear market in the making.

To put another way, do not get carried away by all the sensations and aimless trends in the world. Do what is prudent and logical.

The Bitcoin market is on the rise amid the COVID-19 pandemic that has shaken financial markets worldwide. The granddaddy cryptocurrency has been experiencing a big run-up of late while outperforming Gold prices in the last twelve months, perhaps supported by claims by enthusiastic digital currency bulls that declare Bitcoin as a viable store of value asset. 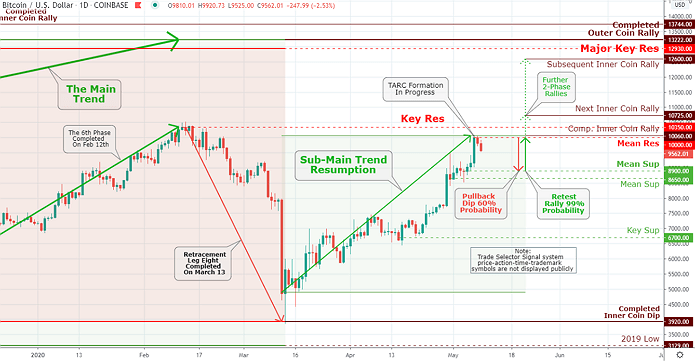 Within the last three trading sessions, Bitcoin has been incapable of trading above $10,000 due to the completed Inner Coin Rally $10,060 - a natural phenomenon of TSS.  With only less than two days left until the Bitcoin block halving will take place only for the third time in Bitcoin history - TSS data shows the noblest crypto asset by market capitalization is retreating to strategic supports levels: Mean Sup $8,900 and $8,650 respectively.

Hence, a pullback to retest lower two support levels would be perfectly natural, if not for the completion of the Inner Coin Rally.  At this stage, risk-averse investors and traders might be waiting for a breakout from the specified of the two supports that Bitcoin is ready to punch towards and above $10,000 level.

The equity market turned to its winning trends this week in a broad-based rise driven by the mega-cap technology leading stocks. The Nasdaq Composite index has taken the lead with a 6.0% increase that boosted the technology index back into the positive zone for 2020. The small-cap Russell 2000 index with +5.5% posting was next in rank, followed by the broad S&P 500 index with +3.5% and DJI Average index print of +2.6%.

Wall Street was given the good and the bad news this week, though it was the good news that reverberated with the market as it energized the reopening and recovery story it has been flowing recently.

It did not care too much for calls that the stocks have gotten ahead of themselves in such a hurry be a statement from Warren Buffett that he has not seen any appealing investment opportunities or in pricing in the cheering news.

The big victors kept on winning: Amazon, Apple, Alphabet, Facebook Microsoft, and the remainder of the broader market naturally followed along. The vital energy equities did better, as crude oil prices resumed their rebound on hopes that reopening the economy will encourage consumption demand.

From a sector scene, the energy posted a big +8.3% increase advancing with the largest gain of 8%, followed by the information technology sector posting +6.6%, next consumer discretionary sector print of +4.4%, and communication services sector showing +3.7%, which include the preceding mega-cap stocks. The utilities sector with +0.5% and consumer staples sector posting +0.9% grew the least.

While the reopening of the economy process has had its hurdles, laid-off vest workers are revealing a very similar belief held by the stock market that everything will get better. For example, last month, nonfarm payrolls sank to 20.5 million, and the unemployment rate increased to 14.7%; however, in April, 78.3% of job losers were classified as "temporary layoff."

Excluded of this week's advancement were the airline stocks after Berkshire Hathaway's Warren Buffett sold its whole stake in the airline companies, including American Airlines, Delta, Southwest, and United. While there might have been green pasture elsewhere, this wasn't one of those areas.

Elsewhere, the U.S. Treasury market yield curve increased this week. The Two-year yield decreased six basis points to close at 0.14%, while the Ten-year yield rose four basis points to finish at 0.68%. The U.S. Dollar Index strengthened by 0.74% to post at 99.102.