The U.S. stock market returned its bullish attitude this week, supported by a piece of positive vaccine news and a prevailing business leisure reopening spirit that boosted most sectors. The broad S&P 500 index posted +3.2%, DJI Average end up with +3.3%, and heavy-tech Nasdaq Composite index with +3.4% climbed more than 3%, while the Russell 2000 index escalated 7.8%.

Another contributing factor involved having all fifty states now partially reopened and Federal Reserve Chair Powell reemphasizing that the central bank is not out of ammo. At its high this week, the S&P 500 index was less than 20 points of its $3,000 level and traded at its most vigorous level since March 4th.

Nine of the eleven S&P 500 sectors advanced at least 3.0% this week, particularly as regards the industrials sector which posted +7.2%, energy sector gained +6.1%, and real estate sector posted +5.6%. Transport equities contributed an added lift for the industrials space, while energy equities followed crude oil prices posting +3.87, or +13.2% closing at $33.25. The health care sector declined by -0.8% this week.

The stock market(s) made gains in all significant developed markets in Eurozone. In the Eurozone, stocks surged on the announcement that Germany was entering other central EU (European Union) members in establishing an offered recovery fund for its members. Germany’s DAX30 index was particularly strong following a much greater than anticipated rise in the German Leibniz Centre for European Economic Research (ZEW) investor sentiment poll.

The Honk Kong Hang Seng Index observed its biggest one-day decline in nearly five years, following China's announcement - it would force national security laws in the Hong Kong region. At the same time, the  Morgan Stanley Capital International (MSCI) Hong Kong Index had its most damaging trading day since 2008. The majority of other Asian regional markets closed higher for the week. 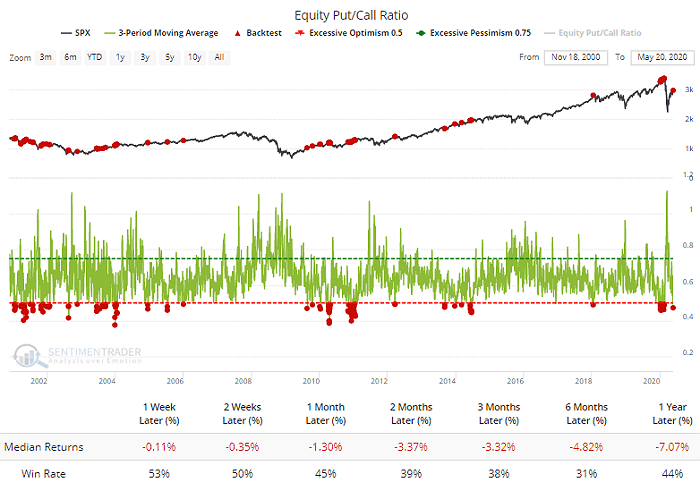 On Monday's session, we noticed that the smallest of options traders displayed very aggressive optimism regarding a continued market rally. They placed a record volume of bullish versus bearish trades.

Such a sentiment seems to have expanded to the options market as a whole. This never the less is the first time in many months that the three-day average of the Put/Call Ratio Equity-only has been under 0.5. The TSS back-test shows that the S&P 500 index in the past struggled as the Put/Call Ratio was this low.

Therefore when we notice readings as such, this leads to lower returns even during a strong bull market; the overall level of options trading activity is problematic. However, the redeeming factor might be that we are rather early in a fresh bull market to encompass over any contradictions like this; however, that's putting a lot of trust in the concept that we are passed the most dangerous unfolding.

Gold and Silver market have undergone a bullish movement as we are approaching the final trading week in May. Thus far, the news headlines in 2020 have all been about Gold, though now the focus is encompassing the Silver. The increase in the Gold to the Silver ratio in the shown chart is a definite flag that a signal turning point of prices in favor of Silver has taken place. 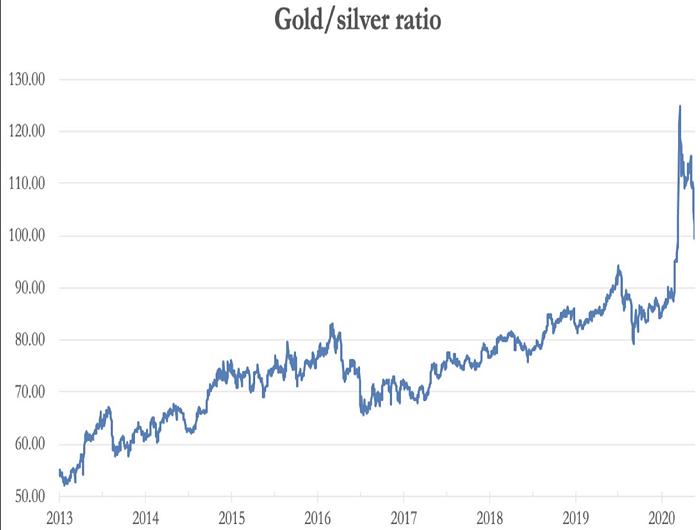 Bitcoin recovery to near $10,000 Maginot line blocked by Mean Res $10,000 and with a Memorial Day in the U.S. coming up investors and traders bracing for significant volatility. However, since falling below the ascending forthcoming pause/sell zone, the Bitcoin price has stabilized in a $9,200 range.

The coin continues to meet significant resistance at the Mean Res $10,000, obstructing investors, and traders’ longing to drive the price above $10,000 and to a next Inner Coin Rally marked $10,725.