The DJI Average market every day this week set a new intraday record high, eventually rising by 4.1% and also closing at a record high. For the first time in a month, the small-cap Russell 2000 with +7.3% and broad S&P 500 index with +2.6% also set new highs. While the Nasdaq Composite dug itself out of correction territory with posting +3.1% and a 3% gain for the week.

All S&P 500 market sectors contributed to this week's advancement, with many traders and investors fearful of being left behind in the significant rally effort. The real estate and consumer discretionary both posting +5.7% each, utilities and materials with +4.4% apiece, industrials with +3.6%, and financials with +3.2% were sectors bettered the benchmark index. However, the communication services sector posting a meager +0.7% gain trailed modestly.

With news flow supporting the reopening optimism and inflation outlook, sending the Ten-year Treasury note yield higher another 9bps to close at 1.64% by week's ending session - its highest level ever since last February. Growth stocks gain, on the other hand-trimmed their weekly upwards move. The Chicago Board Options Exchange (CBOE) Volatility Index (VI) fell 16.1% to post a 20.69, as investors and traders decreased their hedging exposure despite the market's bullish price action.

Strangely enough, at the beginning of this week's session, widely-followed American billionaire businessman hedge fund manager David Alan Tepper said on CNBC that the Ten-year yield is at, or very near, the top of a new yield range as a consequence of the higher yields drawing foreign buyers. This, however, was when the Ten-year yield was trading at 1.61%; for this reason, investors and traders will continue to observe the Ten-year yield very carefully over the next several weeks for any troublesome swings.

The Gold and Silver market rallied this week, coming from oversold price action levels, before fading from mid-week highs. Gold finished at $1,727, having reached $1,740 early on Thursday morning, trading for a net gain of $28 from previous Friday’s close. Silver crested at $26.45 before sliding to $25.90 for a net increase of 66 cents in the same space of time. The OI (open interest) on the Comex exchange has decreased to relatively very low levels for both precious metals.

All Eurozone stock markets were higher, with gains advancing higher after the ECB (European Central Bank) announced that it would dramatically boost the purchases of bonds concealing under its widespread pandemic quantitative easing program, and European Central Bank President Lagarde stated that long-term inflation expectancy was subdued.

The majority of Asian stock markets rose as concerns about declining higher bond yields. Nevertheless, stocks on the Hong Kong exchange and mainland Shanghai ended the week's session lower after news that China’s antitrust regulators were intensifying a campaign to limit the power of large Internet and technology companies such as Baidu Inc. and Tencent Holdings Ltd.

In Euros, the Bitcoin market hit record highs and reached an all-time high on Thursday night; the coin struck a new high of 48,473 Euros. That is just slightly higher than the previous record of 48,143 Euros on 21 February.

Not in US Dollars, though

On the US Dollar chart, Bitcoin fell just short! The coin peaked at $58,367 on 21 February. Thursday night, Bitcoin touched $58,113, not enough to break the previous record.

However, the US Dollar chart is more relevant to watch, as most traders and investors follow the price of Bitcoin in US Dollars. Can the coin set a new record in greenbacks this weekend - yes, indeed will do?

Why there’s a difference?

The Euro and the US Dollar fluctuate in value. In the chart below, you can see the value of the Euro, expressed in greenbacks. Over the past month, the Euro fiat currency has fallen about 3% versus the US Dollar. Because the Euro has become weaker (or the US Dollar stronger), the Bitcoin market topped sooner in Euros. 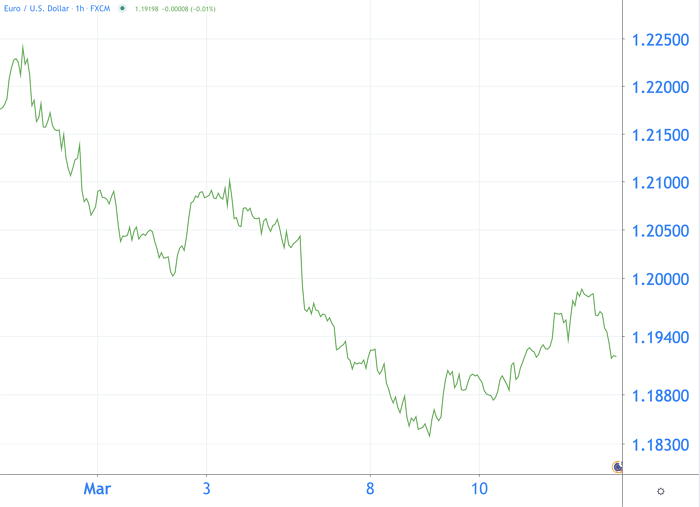