The S&P 500 market went through some tempered swings this week with quarter-end and technical rebalancing causes in effect, though it ultimately concluded with a respectable 1.6% gain. The DJI Average with a +1.4% also finished higher, while the Nasdaq Composite posted a -0.6% and small-cap Russell 2000 index -2.9% lost some ground.

That is not to play down the week's headline news flow because there were many notable events; however, the market did not want to go into a clean anecdote. The Ten-year yield declined 7bps to finish at 1.66%, but the mega-capitalization stocks within the consumer discretionary lost 0.2%, and communication services with a negative 1.9% were sectors still underperformed.

One of these days, the market was rallying on joyous calling macro-level news, then it sold off into the close hour for no reason. However, the one consistent outcome was that the S&P 500's Mean Sup $3,885 showed once again to be an effective measure of support level, as it has over the past five days. After the index slid below it on Thursday, buyers moved in and followed through over as all of the S&P 500's benchmark weekly gains came on that final trading day of the week.

Nine of the eleven S&P 500 benchmark sectors added to the advance, and eight advanced at least 2.0% plus, including the vital real estate sector posting a 4.2% increase. The top-weighted information technology sector rose by 2.5%. 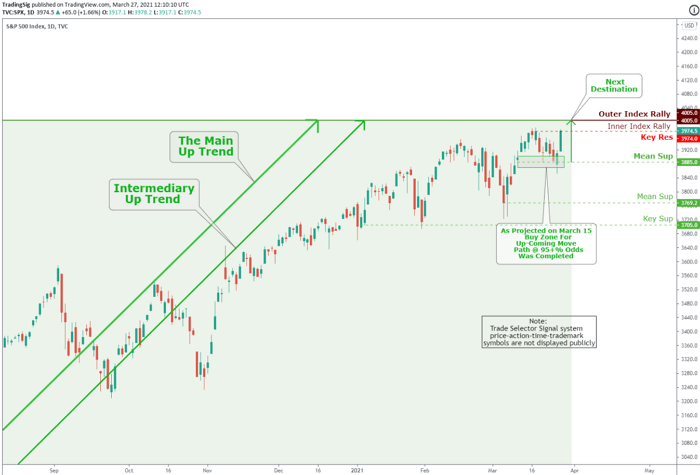 Technical Analysis and Outlook: The Index hit Mean Sup $3,885 profoundly, and a great buying opportunity is achieved - Advancement to Key Res $3,974 is complete also. The next move to the Outer Index Rally and Inner Index Rally marked at $4,005 is in progress.

Market confidence measures and PMIs being also better than anticipated in Japan and Eurozone, including the Eurozone manufacturing PMI struck its highest mark ever since the series was began collected by IHS Markit. Nevertheless, some stock markets declined as economic restrictions got more cutting.

Equities lost ground in France, where non-essential consumer markets in many areas, including Paris, have closed again for a minimum of the next four weeks. Underperformance was seen in Spain, which also is sensitive to the vital travel and tourism sector.

Japanese stocks did less than expected in a continued response to the BoJ (Bank of Japan), reducing capital support to the stock market this week.

Yesterday we saw the expiration of April options for Gold and Silver metals. The bullion and commercial establishment emerged particularly keen to assure that Silver options expired worthless with strike prices at $25. Accordingly, on Friday, the Silver price traded down to $24.41, and by a final couple of hours, it had rallied to close above the strategic $25 mark.

However, it is also interesting to see what will happen next. If the coin finds a bottom at the end of the month at Mean Sup $51,360, a period of solid growth begins, and each time we see a new high. Will the Bitcoin rocket launch again during April? - Stay tuned.