The S&P 500 market with-0.8%, DJI Average with -0.5%, and small-cap Russell 2000 with -2.8% set closing and intraday record highs prices in the first few days of this week's trading session. However, all three significant indices ultimately ran into selling force as long-term yields proceeded to move higher. The heavy-loaded technology Nasdaq Composite dipped 0.8%, while the Russell 2000 index diverged with a sharp 3% drop. 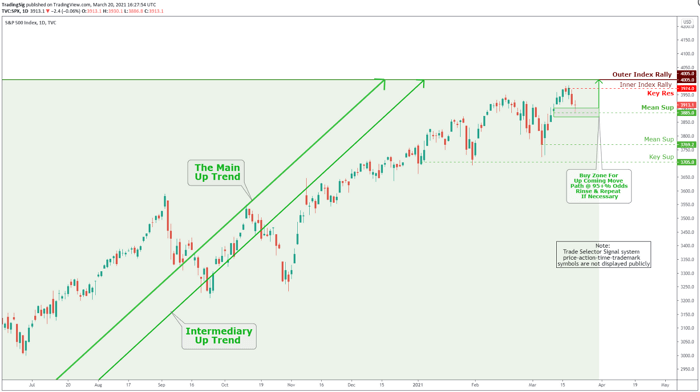 Technical Analysis and Outlook: The Index low nearly touched Mean Sup $3,885. This stands for buying once the prices drop to this level with anticipation to advance to test Key Res $3,974 and move to the Outer Index Rally and Inner Index Rally marked at $4,005.

The Rest of the (Market) Story

Beginning with the most eventful event this week session was, the Fed Chair Powell and FOMC struck a patient, and dovish tone about central banks' monetary policy after their two-day meeting concluded on Wednesday, which served the markets and briefly calmed down the U.S. Treasury market.

1. No change to the fed funds rate.

2. The median estimation is that the fed funds interest rate would continue to be unchanged through 2023.

3. The velocity of asset purchases with at least $120B per month.

Fed Chair Jerome Powell said it would not be time to begin talking about reducing rates until the Fed surveys actual substantial inflation and employment improvement.

For a couple of treasury market sessions, the Ten-year yield trifled with 1.76% amid continuing inflation and growth expectations (With expected transitory inflation pressures this year, the Fed will not intervene). Selling interest was further encouraged by the BoJ (Bank of Japan) broadening its trading band to about 0.00% for the Ten-year Japanese government bonds (JGBs) to 50bps moving from 40bps, while the Fed is allowing the SLR (Supplementary Leverage Ratio) exemption to expire end of this month.

The Ten-year yield eventually settled at 1.73% or 9bps higher since last week's market settlement. The higher interest rates ran toward the growth stocks within the information technology sector, posting -1.4%. The vital energy sector with -7.7%, financials sector with -1.7%, and real estate sector with -1.0% were also underperformed. The communication services sector posted positive 0.5%, along with health care +0.4%, and consumer staples print of +0.2% were the sectors finished higher.

The energy sector, which fell 7.7%, was a prey of profit-taking action after a solid Q1 posting. West Texas Intermediate crude oil futures market declined 6.3% to close $61.45/bbl amid some lingering anxieties about the global recovery and oil demand as a result of Europe's fighting third coronavirus wave.

Overall an economic data was mixed. Last month industrial production, retail sales, and housing starts, and permit numbers were lower than expected. The Philadelphia Fed Index rose to 51.8 in March, rising from 23.1 postings in February. Numerous participants think the numbers will shift more positively this month, similar to the Philadelphia Fed Index, as the $1.9T stimulus bundle flows through the U.S. economy.

At an early stage, most Eurozone market(s) trended higher after turning a blind eye to decisions by numerous countries to suspend the vaccine produced by the AstraZeneca PLC. However, few retreated to negative territory after many countries proclaimed new lockdown measures.

Japanese stocks rose after the government stated that the state of emergency within the Tokyo-area would be canceled this weekend. Stocks in Hong Kong rose after solid industrial production and retail sales data were posted from China.

However, mainland China's equities declined after an angry exchange at the first high-level meeting in Alaska between the Biden administration and the Chinese officials.

The BoE (Bank of England) and the Bank of Japan both resounded Fed Chair Powell's sentiments, keeping benchmark interest rates steadfast and making no meaningful changes to asset-buying programs.

Thus far, 2021 hasn't been the greatest of years for the precious metals market; however, we should consider the significant overall gains since March of the last year. Looking at Silver’s story by stepping back from the fray is incredibly captivating.

Silver is up over 116% over the past 12 months, notwithstanding the correction commenced in August of last year. Gold, on the other hand, is up 18.5% over the same period. But, YTD (year to date), Gold is down slightly over 10%, and Silver is down nearly 4%.

In a recent development, Governor of the National Bank of Poland - Adam Glapinski, announces that Poland’s central bank wants to purchase at least 100 tons of Gold in the next couple of years to support Poland’s economic strength. This hints to us all that substantial interest in Gold by central banks is very strong.

This week has been a roller coaster of emotions in the crypto market! Last weekend Bitcoin was worth just under $62,000. On Tuesday, the price plunged to below $54,000. However, yesterday (Friday), Bitcoin managed to close above 58,000 once again. As of this writing, Bitcoin is breaking upwards. Will we see a new all-time high this weekend? How will the Bitcoin price develop next week? Stay tuned.