The S&P 500 market increased 6.2% for the week, which followed a four-day winning streak since the market was more inclined to view economic and geopolitical issues positively. Small-cap Russell 2000 index with +5.4% and the Dow Jones Industrial Average with +5.5% climbed over 5.0%, while the heavily loaded technology stocks Nasdaq Composite soared with an 8.2% increase.

Ten of eleven S&P 500 market sectors ended up higher, with nine sectors increasing between 2.7% posting by real estate and 9.3% by consumer discretionary sector. The only loser was the energy sector, posting -3.6% for the week.

There was no single trigger to activate the market's rise. Instead, it was a swarm of events that helped revive the market's spirits. These including:

To denote the positive news:

Another plausible explanation for the market rally was that the market expected a technical rebound. The bearish mood prevalent during the week formed the foundation of S&P 500 of our Mean Sup 4170 for the massive rise. There have been short-covering that was in the mix.

Concerning the Fed's meeting regarding the monetary policy, the central bank raised the interest rate for the federal fund rate by 25 basis points to a target range of 0.25-0.50 - this was in line with expectations. It also announced six possible additional rate increases this year. Chair Powell stated that the Fed might begin to reduce the balance sheet after the policy meeting in May.

After the primary commodities market topped last week's trading session and sold off severely this week, we witnessed a continuation of tumbling prices before stabilizing on Wednesday's session. Gold settled at $1,921 on Friday's session, down $67 from last Friday's close in the wake of a low point of $1,895 on Wednesday. The silver metal traded at $24.94, down 91 cents, having touched $24.47 for the same period. 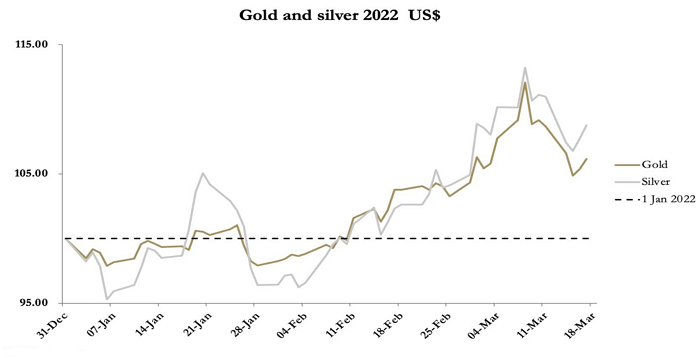 It was a week full of crucial decisions. The crypto sector has been officially legalized in Ukraine, and bitcoiners did breathe a sigh of relief following a recent vote by the European Parliament. Furthermore, bitcoin is keeping the crypto market in suspense. When will the price finally break out to Key Res $44,400? - Stay tuned.