The S&P 500 market improved by 1.9% this week, regaining some losses from the previous week. The heavy-tech Nasdaq Composite index bettered again with a 3.7% increase, followed by the small-cap Russell 2000 posting plus 2.2% and DJI Average posting a positive 1.0%.

The S&P 500's eight sectors of the eleven concluded the week in positive territory, in particular, health care with a +3.1%, information technology sector posting +2.8%, consumer staples print +2.4%, and consumer discretionary sector showing +2.3%. The utilities with -2.4%, energy with -1.0%, and real estate sector showing -0.8% finished in the red.

The risk sentiment was bolstered following retail sales showing a rebound by 17.7% m/m in May, news that President Trump was planning a $1 trillion infrastructure program, also the BBC commented on a steroidal treatment for coronavirus in the U.K. that showed reduced deaths rate in critically ill patients.

The reopening of the economic narrative was back in the plot, demonstrated by the 10% increase in West Texas Intermediate (WTI) crude oil futures showing $3.50 gain or +9.7%. However, it did run into resistance level by the end of the trading week.

Elsewhere, initial jobless data for the week ending June 13 continued to rise with over 1.5 million, and Federal Reserve Chair Powell presented central banks semiannual monetary policy before U.S. Congress. Also, Chairman Powell pointed out to lawmakers of their spending powers, reemphasizing that they should do a lot more to support the U.S. economy.

In other market developments

U.S. Treasuries market traded in a moderately narrow range this week and finished close to their starting positions. The Two-year yield increased one basis point to 0.19% yield, and the Ten-year yield was just about the flat posting of 0.70%. The U.S. Dollar Index advanced 0.4% to finish at 97.66.

All stock markets in Eurozone were higher. Stocks responded positively to a much more robust than expected data from the German ZEW investor sentiment study. Also, there was positive talk around the Brexit discussions that invigorated hopes for the European Union and the U.K. to reach an agreement before the end of the transition period.

Asian-Pacific markets all risen, however, Japanese stocks lagged after the announcement of its most significant monthly drop in exports since 2009. Asian markets, in particular, generally underperformed other regions due to an unexpected escalation in a geopolitical scene with North Korea.

By the end of the week, Bitcoin recovered from it’s ‘Monday hangover.’ Last Monday, the price was down to $8,895, and as of this writing, one Bitcoin is worth just under $9,300, which is almost at the same level as last Friday. Let’s hope the upcoming week's sessions will be better.

There was a collective effort to keep Gold below the Key Res $1,748 line for seven trading sessions in a row. Usually, metal markets do not trade like that; therefore, my simple mind observation sees an obvious price capping by bullion, commercial players, and central banks. It is also very apparent for another reason.

Considering the low point last week, COI (Comex Open Interest) has surged by 23,000 contracts, suggesting someone shorted $4 Billion of Gold metal to hold its price beneath the critical resistance line. Only central banks are capable of executing that kind of trade in a bull market. They alone on the planet who gain from a lower Gold price.

Although it seems like Gold dominance is about to defeat bullion, commercial, and central banks, yet once again, the yellow metal eventually will prevail as the Gold’s significant uptrend price resumes the up movement and breaks into the Inner and Outer Gold Rally's of $1,850. 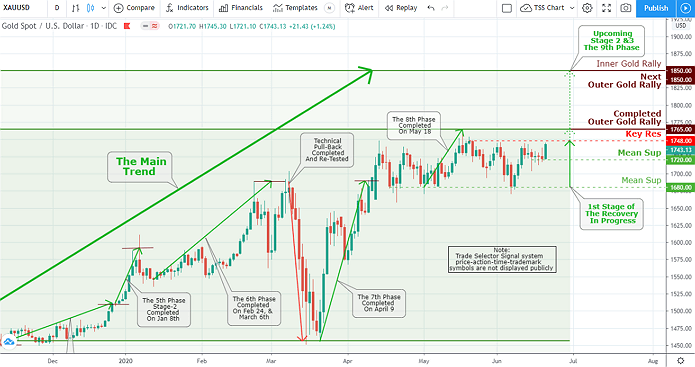 Technical Analysis and Outlook: The continuous Gold movement will take the yellow metal to Key Res $1,748, and the retest of the completed Outer Gold Rally $1,765 will follow its overdue Inner and Outer Rallies $1,850. On the downside, we have intermediate Mean Sup $1,720.