The market was up around midday on Friday due to a 7 percent decline in the price of crude oil. Even with today's ~0.80 percent increase within the S&P 500, the index is still down five percent on the week. Suppose you did pay attention to Daily Chart Analysis For June 10. You'll know that my forecast for this week was bearish. It was fitting, precisely right.

Stock markets are selling off on inflation, stagflation, and global tightening concerns, and the succession of lower lows in the major indices suggests that we are still in price detection mode. The S&P 500 has a trailing P/E of 19 and a forward P/E of about 16 (considering earnings expectations do not decline).

I believe that people are trying to determine 1. the chances of a recession, stagflation, or recession in addition to 2. what is the best multiplier for the S&P 500 market when is the case either of those scenarios occurs? However, it remains to be seen. Meanwhile, markets are struggling with an endless number of data points that suggest that the effects of inflation and quantitative tightening hurt the economic system.

In the week's trading, the S&P 500 market dropped 5.8 percent; the U.S. Treasury Two-year note market yield surged 14 basis points up to 3.18 percent after soaring to 3.43 percent earlier this week. The yield on the Ten-year note jumped by eight basis points and reached 3.24% after a close call of 3.50 percent during the beginning of the week. Crude oil prices fell 10.1 percent to close the week's session at $108.46/bbl, natural gas prices fell 20.8 percent to post a $7.02/MMBtu, and copper futures dropped 6.4 percent to finish the week with $4.02/lb closing.

The CBOE Volatility Index (VIX) was much higher this week, though it's not sure if it will surpass the top of its range of trading for 2022, posted at ~36. However, suppose VIX does break out above the 36 thresholds. In that case, this might suggest there is a possibility that market selling pressure isn't as less "orderly" and may be moving towards an increasingly "panicked" state.

If you're looking for indications that the decline in the stock market is at the bottom (at least on a short-term basis), I believe this kind of VIX upsurge might be one of the indicators. As a point of reference, a VIX close to about 31 indicates an ~1.62 percentage daily movement (either upwards or downwards) for the S&P 500, which would translate to around ~59 points.

In the end, there was a lot of concern regarding the current policies used by central banks. The fear of a policy mistake was at the heart of every one of the concerns. The primary market driver, however, was concerned about growth centered around recession and stagflation.

Both outcomes are not suitable for the future earnings of many firms, and that's why many stock market(s) fell in the face of more selling interest this week. In essence, there was a decrease in faith in the current earnings estimates that were in tandem with the diminishing confidence in central banks' ability to manage inflation without triggering an economic recession.

The Eurodollar market has been bouncing around throughout the week, settling over the 1.06 mark but then falling below the 1.04 threshold at a certain point - closing at 1.049. The Mean Res 1.058 level is an attraction for the price action, and paying attention to it is essential.

The price action suggests that Thursday's rise was mainly caused by short-covering, as there was no follow-up price increase. As the higher U.S. Dollar was also applying pressure on the world's currency, a decline in U.S. Treasury yields was helping limit losses.

As the bond and stocks market plummeted this week, silver and gold rose, regaining most of the ground lost during a market sell-off on Monday and Tuesday. Gold traded at $1839 for the week, by a net $19 after trading as low as the $1805 on Tuesday. Silver traded at 21.66, posting a 0.62 cents gain.

The ratio of silver to gold is now up to 84. should precious metals increase in value following the month's closing - which is the half-year point, silver is likely to be the most desirable metal to buy. 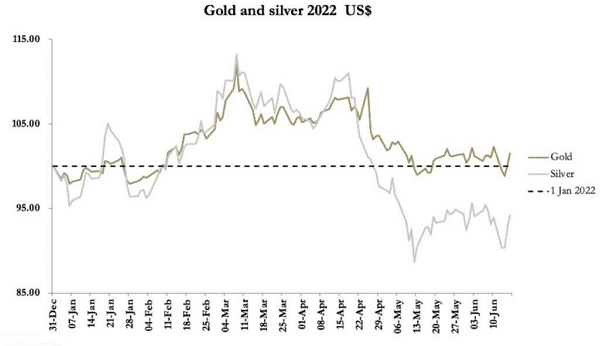 This week was marked by sharp declines and panic in the crypto market. Even a few crypto giants might be in danger of collapsing. Who's the next crypto giant that's about to fall?

The U.S. investment fund Three Arrows Capital (3AC) might become the next cryptocurrency behemoth to fall behind Terra crypto and perhaps even Celsius. The significant difference is that this crypto investment fund was frantically respected and trusted, not for its bright ideas or blockchain technology applications but purely because of its fast liquidity. And that is exactly where it appears to be going wrong now.