The indices market such as S&P 500, DJI Average, and Nasdaq Composite concluded the week in a negative zone, above all the Nasdaq, after establishing intraday session and record highs to commence the week. The small-cap Russell 2000 bettered and gained 0.8%.

It was a very active week, mildly speaking, from analyzing a ton of earning news reports to examining the Fed's most recent policy option and sorting through the latest economic numbers and coronavirus headlines propaganda.

Beginning with earnings, Apple, Microsoft, Amazon, Alphabet, and Facebook, which constitute approximately 22% of the S&P 500's index market capitalization, all struggled this week after steadily reminding investors and traders that their incredible growth over the twelve months is likely to moderate.

Facebook and Apple announced cautious forecasts due to challenging year-to-year computations, while Amazon went as far as implementing below-consensus earnings guidance for the Q3 (third quarter). All this fits rightly with the top growth narrative, which was augmented by mixed economic statistics and the ongoing spread of the Delta variant - wait until they get to Omega one.

For June, new home sales, durable goods orders, and the advance estimation for second-quarter GDP all missed expectations. However, on the positive side, second-quarter GDP increased at a sound annual rate of 6.5%. The consumer confidence release for July was much better than expected. Also, the previous month's Personal Income and Spending numbers featured much better-than-feared Personal Consumption Expenditures Price Index inflation data and better-than-expected spending numbers.

Undeterred by the mega-capitalization losses, the equity market hung in there, as the Federal Reserve delivered no changes to its exceptionally accommodative economic policy stance. Fed Chair Jerome Powell took it even further and stated that there is still some time until substantial further progress has been made to attain the Fed's employment aim.

Powell's remark was helpful for risk sentiment. While it might not have seemed like it from an S&P 500 index viewpoint, seven of the eleven index sectors did finish in positive territory. At the same time, the mega-caps put full-court pressure on three of those sectors: consumer discretionary with -2.6%, communication services with -1.0%, and information technology posting a -0.7%.

The materials sector posted +2.8% and with energy sector with the print of +1.6% were the sectors that masted good gains. In comparison, the financials with +0.7%, health care with +0.5%, real estate with +0.3%, utilities with +0.3), and consumer staples with +0.2% were the sectors which rose moderately.

As far as the bond market is concerned, it was all a total colossal yawn. The Ten-year yield declined five basis points to close at 1.24%, marking peak growth/inflation expectancy. However, the U.S. Dollar’s trade-weighted index moved noticeably lower, helping to underwrite both the Gold and Silver market, accompanying some crucial commodities such as copper metal.

As regularly seen at the month-end trading, the commercials and bullion banks had an advantage in seeing metal prices driven lower, so that majority of call options expired worthless and in the belief that short-term speculators would be trading these components, giving appended downward force to prices.

However, following the expiration of Gold’s actively traded August contract, Gold and Silver had a much better week's session. The Gold closed at $1814, being up $13 from last Friday, while Silver metal rallied to $25.45 closure, concluding the week up 29 cents. 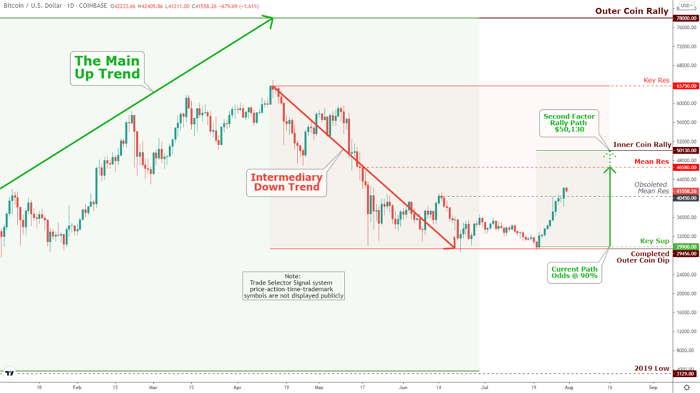 After eight days of big green price bars springing off our suggested entry-level of Completed Outer Coin Dip $29,456, Bitcoin did slow down and took a breather as specified on our ''Bitcoin (BTC/USD) Weekly Daily Chart Analysis For June 21, 2021'' and July 23 update - Mean Res $40,450.

This was a psychological level of $40,000. You can't blame Bitcoin for lack of trying; the price attempted to surpass that level presented itself 38 times throughout Wednesday and Thursday trading sessions, as this being an utmost robust resistance that was penetrated on Friday by obsoleting Mean Res $40,450.

The current trend outcome is marked at Inner Coin Rally of $50,130, while the Mean Res $46,580 rest below and should be embraced wholeheartedly.