The market started this week with the S&P 500, Nasdaq Composite, and DJI Average concluding at record highs; however, that was given as good as one got. All three finished lower with -1.0%, -1.9%, and -0.5%, respectively, as the market changed to be defensive, while the big loser was the small-cap Russell 2000 with a -5.1% decline.

There was not one particular event to attribute for the losses, although the U.S. Treasury proceeded to behave as if growth rates and inflation rates could be topping. That is because the Ten-year note yield declined six basis points to close at 1.3%, despite consumer and producer prices prompting higher than anticipated for the previous month also with retail sales numbers for last month beat expectations.

On a Year-Over-Year basis, the total Consumer Price Index (CPI) was up 5.4%, and also producer prices for final requirements/demand were up 7.3%. On m/m in June, the total retail sales increased 0.6%.

The defensive price action market bias was additionally underscored by the robust gains from the S&P 500 utilities sector with +2.6%, the consumer staples sector with +1.3%, and the real estate sector with +0.7%. Apple did very well, also, advancing 0.9% for the week's session after Bloomberg reviling Apple's plans to raise production for its next-generation iPhone by a whopping 20% in 2021.

On the contrary, the energy sector was beaten up with a 7.7% deterioration, outrunning the decline in crude oil prices with -2.80 or -3.8% closing $71.76/bbl. The consumer discretionary sector with -2.6%, materials sector with -2.4%, and financials sector with -1.6% were the sectors that underperformed with losses above 1.5%.

There was a bunch of Earnings Per Share (EPS) beats this week, most mainly coming out of the financial sector; however, that was not so critical for the much broader market, let be the banks granted the lower U.S. Treasury yields. Nevertheless, Taiwan Semiconductor (TSM) stock missed EPS estimations, which weighed heavily on the Philadelphia Semiconductor Index (PHLX) with a -4.1% posting.

Separately, Federal Reserve Chair Jerome Powell testified before U.S. Congress for his semiannual address on Fed's monetary policy. The significant takeaway from that presentation was that the Federal Reserve is not ready to change gears into reverse on its monetary policy; as Mr. Powell answered, "reaching the standard of 'substantial further progress' is still a ways off."

On the whole, we saw the stock market cooling off in part because of the mind-blowing price action in the U.S. Treasury market. We shall see what will happen next week when many non-financial companies earning reports will be disclosed. 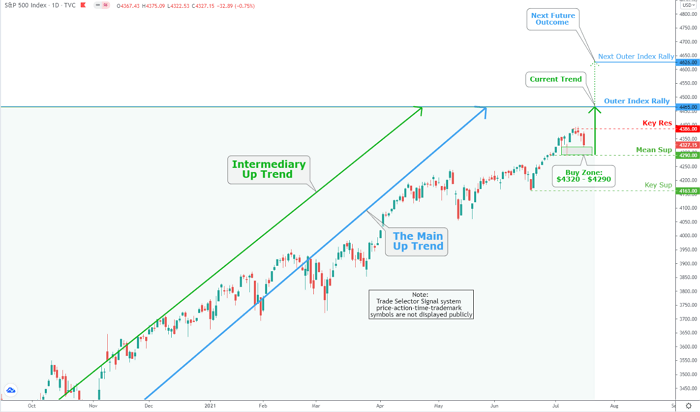 The People’s Bank of China surprisingly cut the RRR (Required Reserve Ratio) by 0.5% to an overall 12.0%, which will add ¥1 trillion into the Chinese banking system. This was seen as a possible conclusion of the tightening movement and is a hike for upcoming growth.

In the meantime, the significant Eurozone markets all advanced to the downside. The German DAX30 Index slid down by 0.6%, the French CAC40 Index skidded by 0.5%, and United Kingdom's FTSE100 Index skimmed down by 0.1%.

The deterioration in North American bond yields scored a critical milestone as the U.S. Treasury Ten-year note yield touched off the significant technical level of 1.25% (intra-day trading). Consequently, the yield on the benchmark Ten-year note edged up by less than a basis point to close at 1.3%.

Disconfirming the seasonal summer slowdown, Gold metal is up 2.75% in the current month, principally in answer to rising inflation concerns. The Silver market is even in the month of July thus far.

Bear in mind that precious metals will often take you to the very edge, over the edge, and back again. The metals bull market wants as few participants present onboard as possible. In trading Gold and Silver, you want to wear your big pants. Furthermore, if you concentrate on the bias, sentiments, macro overthinking, news, etc., one will struggle.

Famous analyst Willy Woo believes Bitcoin is ready to reach a six-figure price once the decline is over. How high can Bitcoin go? Woo is convinced that Bitcoin could easily hit $158,000. Please note that our initial bull leg to Outer Coin Rally of $78,000 was first called on April 19, 2021 (Trading View)

During a podcast with Anthony Pompliano, on-chain analyst Willy Woo shares his thoughts. According to Woo, it's only a matter of time before bitcoin enters the next phase of the bull market:

''This is a bull market. There is no denying this. We have an x-ray vision of what investors are doing, and it's bullish as the price slides down. I think the next big event is when the fundamentals put pressure on the price action, and we break out of this what I would call the reaccumulation band, in the middle of a bull market''.

Are you looking for a discount if Bitcoin dives to retest our Completed Outer Coin Dip of $29,456? Is this the perfect moment to buy the dip? You decide ;)