The market at the beginning of the new year witnessed an influx of cash out of the growth stocks, a shift towards value stocks, and an increase in the long-term interest rates. It was a tough week for the Nasdaq Composite, dropping 4.5%, while the small-cap Russell 2000 decreased 2.9%, the S&P 500 fell 1.9%.

The Dow Jones Industrial Average declined by just 0.3%, and along with the S&P 500, both set record highs for the intraday period in the early hours of the week.

The decline in growth stocks was attributed to the increase in the yield on Ten-year notes, which climbed to 1.80% on Friday after starting the week at 1.51%. The initial 12 basis point rise was not enough to dampen the risk-taking mood, however, as apparent in S&P 500 index, soaring to record highs at the beginning of the week in addition to Apple (AAPL) surpassing an all-time high of $3 trillion in its market capitalization.

The persistent Ten-year notes rise to 1.80% was alarming and could open the door to a 2.0% level. This year's greater likelihood of an increased interest rate environment triggered the market shift to high-value stocks, despite an overall decline after last month's FOMC Minutes released Wednesday.

The FOMC Minutes revealed that the participants believed it was suitable to reduce the balance sheet amount at a more rapid pace than in the course of the previous normalization period and to start close to the first-rate hike than the last time. This was because the economic outlook is more favorable now, and the balance sheet is much greater.

Anticipations of a more decisive Fed were bolstered with reports like the Employment Situation report for December that showed a tight labor market, with significant wage increases and near-max employment growth - Nonfarm payrolls rose to 199,000, and the unemployment rate fell to 3.9%, and the average hourly earnings increased by 0.6&

In March, the likelihood of the first-rate hike probability rose to 75.7%, compared to 54.0% a week earlier. The yield on the Two-year note is a measure of expectations of the fed funds rate, increased fourteen basis points, fetching it to 0.87%. The week's Ten-year yield finished at 1.77%, 26 basis points higher than last Friday's closing.

The compelling thing is that the shift into cyclical/value stocks occurred despite the decline of the ISM Manufacturing and Services PMIs for last month. Concerning Technical Analysis and Outlook: The S&P 500 market closed above its Mean Sup 4679 at the end of the week.

German Ten-year bond market yields hit a two-month record high as investors focused on the Central Bank's decision to withdraw the pandemic stimulus. The major European equity indices, such as those of the German Dax, U.K.  FTSE 100, French CAC 40,  all had a stellar performance for the year.

The Chinese stock market was able to generate positive year-end results despite ongoing issues in the real estate sector. Also, China's technology and manufacturing hub, the City of Xian, with 13 million residents, was placed under lockdown in December while it battles the most severe Covid outbreak that has struck China this year.

In the end, the Chinese S.E. composite index gained 4.2 percent over the year. At the same time, Japan's Nikkei index posted the highest year-end close since the glorious 1980s, fueled by monetary and fiscal stimulus, as well as the optimism of the post-pandemic world recovery. The Nikkei increased 4.9% in the year.

Gold is up against many headwinds - challenging Fed talk, threats of rate hikes, Q.T., and tapering, a moderately strong U.S. Dollar, Ten-year notes yields rising, and little interest in yellow metal from U.S. & U.K. institutional investors. In 2021 there were the second-highest outpours from global ETFs trading on record – on account of U.S. & U.K. influence, yet gold still trades near $1800.

If your New Year resolves to buy the dip, then you're in luck! Bitcoin took a nosedive and is already -14% since Jan 1st. What a difference a year makes. At the beginning of 2021, when bitcoin reached the same price as of today's price, the market was euphoric. And now it's considered a dip.

Institutions are deliberately crashing Bitcoin to repurchase it cheaper. In an interview with The Daily HODL, a Dutch quant analyst said:

"They, together with their OTC (over-the-counter) desks, scare retail and normal people out of their positions… That is especially effective if you sell and push the price down in illiquid hours and then buy the stuff at liquid hours in small chunks. That is basically what I'm seeing since January, so the last five months. That's very, very bullish in my eyes."

Notice (Chart below) how institutional investors are manipulating the bitcoin market. They push the prices down during illiquid trading hours at the end of each month. Then they repurchase small quantities in the course of liquid hours at the start of each month. And this month, this price pattern has resulted in four V-shaped recoveries. 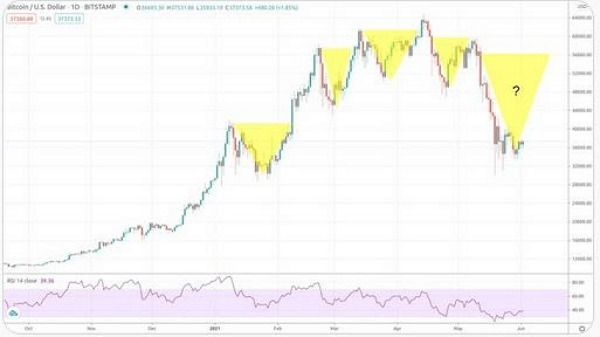