With the abbreviated trading week, the market stressed renewed vigor in the mega-capitalization stocks, which pushed the Nasdaq Composite outperformance by +4.2% and boosted the S&P 500 index by +1.9%. The DJI Average scrambled along with +0.6% in the process. Particularly concerning the small-cap Russell 2000 index posting +2.2%, each index established new historical record highs.

The iShares American Home Construction ETF posted +8.9%, and PHLX Semiconductor Sector (SOX) advanced +2.7% as they were a couple of other seeds of force. The mega-capitalization, semiconductor stocks, and homebuilding stocks hoisted the S&P 500 index communication services with +6.0%, information technology with +4.4%, and consumer discretionary with +3.1% market sectors to the top spots.

The homebuilding stocks rallied around exceptional housing numbers, particularly concerning one report that highlighted the most robust housing pace ever since September of 2006.

In the American bond market, U.S. Treasuries climbed higher following the moderate drop marked in the previous trading session. Subsequently, the interest rate yield on the Ten-year note contract benchmark, which flows opposite its trading price, slid 1.8 bps, closing at 1.091%.

Hong Kong’s Hang Seng Index was particularly hot after the stock of Alibaba Group skyrocketed in response to the reappearance of co-founder and former Chief Executive Officer (CEO) Jack Ma, who has not been seen for over three months. Similar to the BoC (Bank of Canada), both the ECB European Central Bank) and the BoJ (Bank of Japan) met this week and held their accommodative stance on monetary policies steadfastly in place.

As of this writing, Bitcoin market was under $32,000 and struggling. However, since we like Trade Selector Signal analysis, we offer a warning word when many people discuss jumping in blindly on the long side. As you can see on the chart, we have identified and confirmed the top as of January 11, and we are heading to Outer Coin Dip for $27,450 and some more.

With the completed Inner Coin Rally of $49,955 on Jan. 8th, and with the TARC conformation (Proprietary symbol not shown), Bitcoin is heading lower to its first destination Outer Coin Dip $27,460. The significant Mean Sup $26,810 offers an immediate buying opportunity, while the next Ultimate Buy zone lies at $22,720. The leading destination to the upside is marked at Mean Res $36,470. 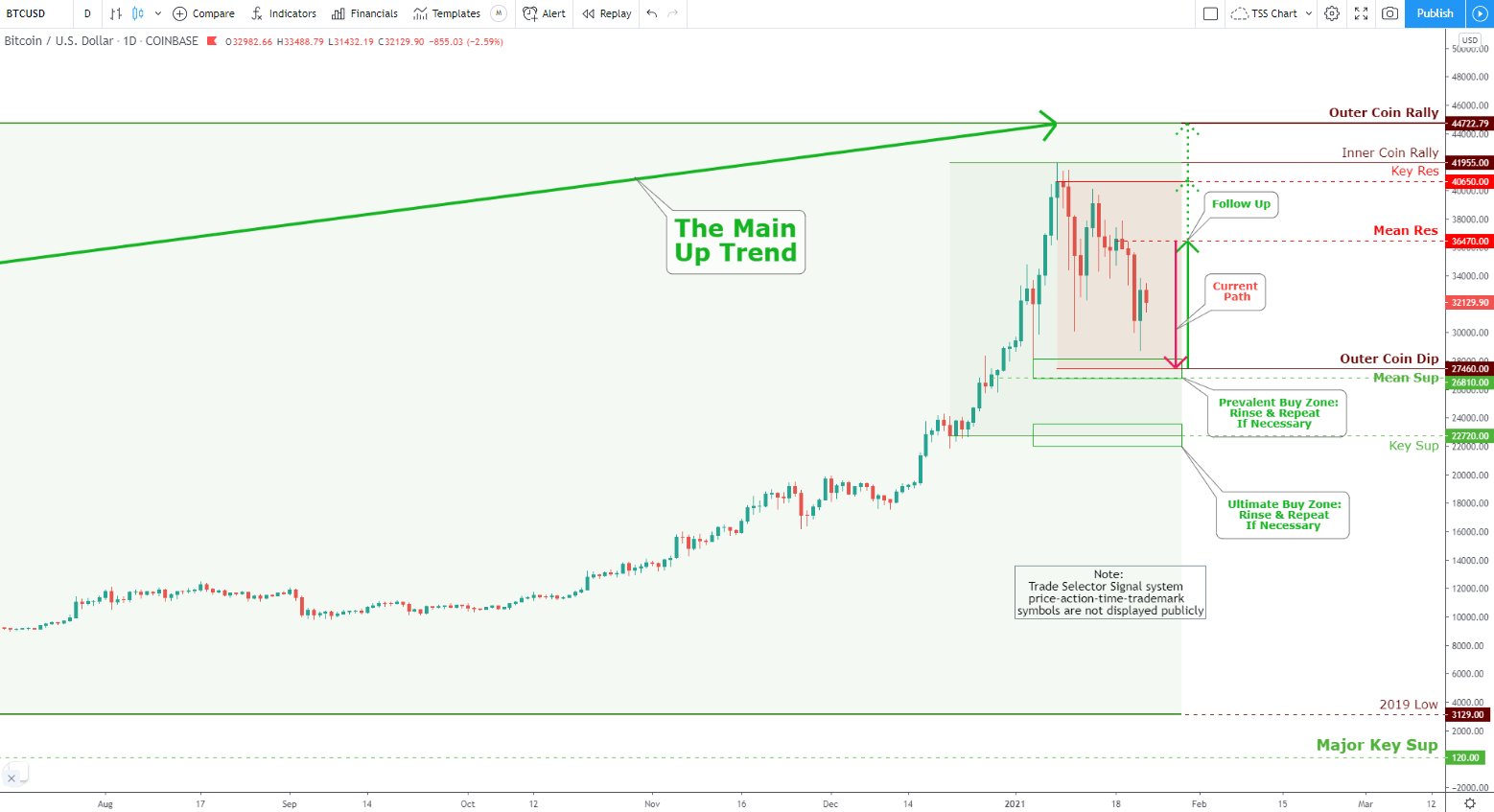